From the archives: Father-kid dynamic duos 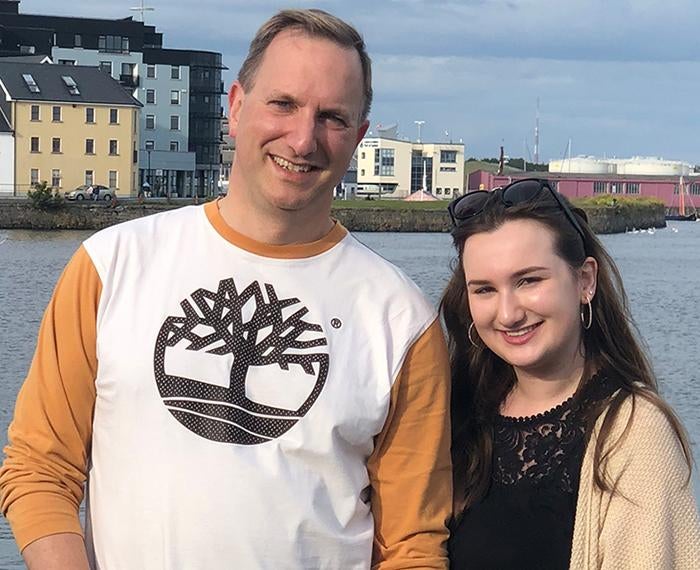 Publishing your first paper. Getting a faculty position. Earning tenure. There are some milestones that many academics will achieve over the course of their career. Only a few, though, get to share an academic achievement with their own kids.

Over the past few years, Pittwire has highlighted projects by fathers and their children, covering topics from political polarization to cryptocurrency. This Father’s Day, read about some of the most rewarding collaborations a dad can experience.

The root of fake news

Since her childhood, Christy Galletta Horner (A&S ’05, EDUC ‘13G, ‘15G) has been hearing from her dad that being a professor is the best job in the world. So she followed in his footsteps — and the two set to work tackling an unexplored facet of how fake news spreads.

Her father, Dennis Galletta, professor of business administration at Pitt’s Joseph M. Katz Graduate School of Business, brought his expertise in information systems to the table. Combined with Galleta Horner’s research in education, the two were able to find patterns in how news consumers respond emotionally to misinformation and how it affects their actions.

“Fake news is a social problem that we’re both really concerned about, and there’s just a huge need to come up with creative solutions and different angles,” Galletta Horner said. “But my favorite part of it was just getting to spend a lot of time with my dad.”

Keeping it civil at the dinner table

When Kris Kanthak was teaching a class on talking about politics across generations ahead of the 2018 midterms, she knew exactly who to turn to for help: her father.

“I think one of the things that is special about when families argue about politics is that no matter how mean and nasty politics in the real world gets, you’re talking with someone you love and respect,” she said.

Kanthak, an associate professor of political science in the Kenneth P. Dietrich School of Arts and Sciences and an expert on American politics, shared data with her class on partisanship and ideology to help her students — most over 50 themselves — learn about how other generations develop their viewpoints. Her dad, Dave Kanthak, provided commentary from the perspective of a longtime school administrator and Department of Education employee.

After a Twitter hashtag promoting vaccination was co-opted by anti-vaccine activists, Pitt undergrad Riley Wolynn was part of a team that documented the shift — and so was her dad, Todd Wolynn (MED ’92), a pediatrician. (They're pictured above.)

They’d been working on research together since anti-vaccine activists attacked Todd’s practice on Facebook when Riley was a junior in high school. And their later collaboration helped the team trace the highly coordinated response of Twitter users spreading vaccine misinformation.

For the late Pitt Professor of Mathematics Gunduz Caginalp, the most exciting collaboration of his career wasn’t working with Nobel Prize-winners or venerated mathematicians — but with his own son Carey, a brilliant mathematical mind in his own right.

The two teamed up to tackle a thorny question behind cryptocurrency, concluding that the alternative currencies wouldn’t be stable enough to replace standard currencies.

“I’ve had a lot of collaborators over the years, but this experience is just about the most wonderful for me,” Gunduz said. He even made a second father-son appearance in Pittwire, this time supporting his son Ryan’s hobby of taking high-powered astronomical images.

Gunduz Caginalp died last December after 38 years as a faculty member in the Department of Mathematics. Read more about him in this obituary in The University Times.