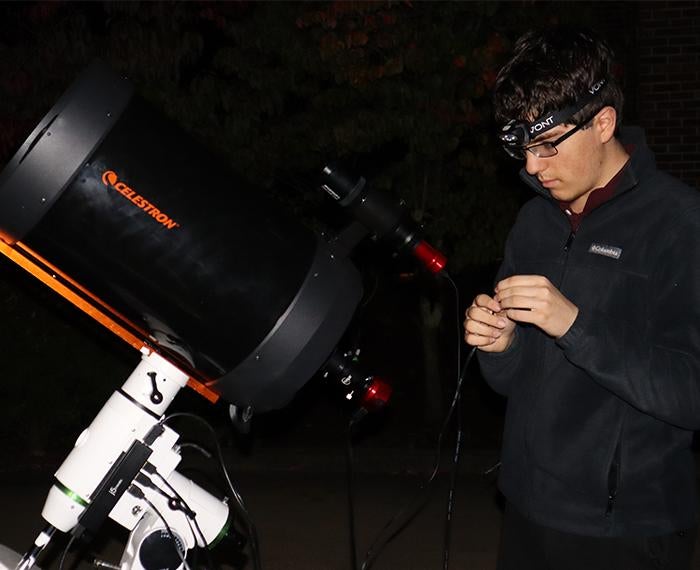 When statewide shutdowns left many indoors for months last spring, some people picked up new hobbies to pass the time. For 16-year-old Ryan Caginalp, that meant finding the tools and developing the skills to take high-powered images of the night skies.

Caginalp, a first-year student in the Honors College in the Swanson School of Engineering, picked up an interest in astrophotography—the process of photographing celestial objects—in July 2019. Since then, he has built a collection of photos featuring the detailed shots of planets, nebulae and other celestial occurrences.

“I really wanted to have a look at some of these planets and see them with my own eyes,” he said.

Caginalp searched astrophotography forums and YouTube videos to learn the basics of astrophotography and what equipment he needed to get started. He started with a standard refractor telescope that provided solid images of the planets but wasn’t as effective for seeing nebulae or other objects in deep space.

His father, Gunduz Caginalp, a professor in the Kenneth P. Dietrich School of Arts and Sciences’ Department of Mathematics, said he invested in equipment such as computer programs and specialized cameras so that Ryan could take his hobby as far as possible.

“Capturing images of galaxies, nebulae and other objects of deep space requires great patience, experimental precision and the ability to use computer programs,” Ryan said. “For starters, one needs a mount that is programmed to rotate in order to compensate for the Earth’s motion. A special camera that is attached to the high-powered telescope then captures hundreds of images as the mounted telescope tracks the heavenly object.”

Ryan then downloads the photos onto a special computer program and compiles them together so the essential features are reinforced while the noise and light pollution are eliminated, he said. The images are then converted to fourteen videos and processed through another program that yields a single image, synthesizing all of the information.

Ryan isn’t the only Caginalp son connected to Pitt. Read about Gunduz and Carey Caginalp’s work on cryptocurrencies and the stock market.

Ryan has a second telescope specifically for planets that uses similar methods to produce high quality images of Saturn and its rings and the moons of Jupiter. The methodical process of locating and capturing a planet requires around 20 videos with 30,000 images each. Even with the help of specialized equipment, the process often required Ryan to spend hours outdoors in the dark to get it right. Ryan has also produced images of the Orion and Crescent nebulae, among other celestial objects.

Prior to enrolling at Pitt, he took a number of undergraduate computer science courses at the University, including senior-level computer algorithms and machine learning courses. This fall, he participated in electrical and computer engineering research with Associate Professor Alex K. Jones and plans to stay on that path as he advances toward graduation.

“I do plan on doing astrophotography in the future. It’s a good hobby to have,” said Ryan.