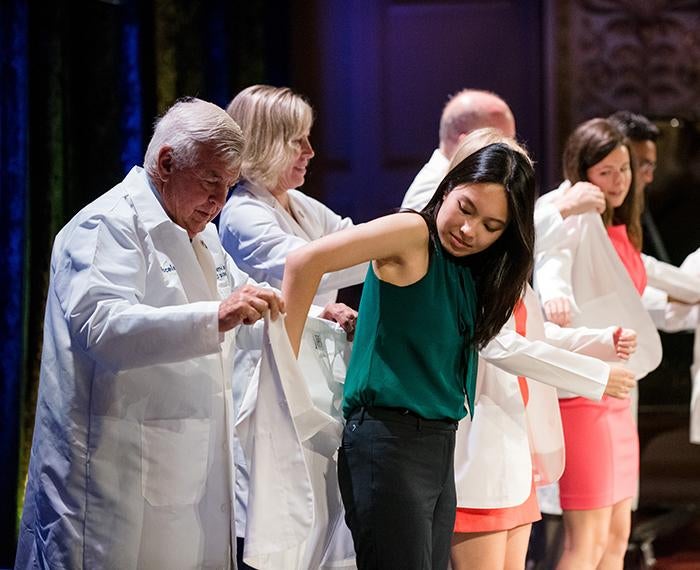 On Sunday, Aug. 7, the University of Pittsburgh School of Medicine celebrated the incoming Class of 2026 during its 28th Annual White Coat Ceremony, held at the Carnegie Music Hall.

In between short performances from the Pittsburgh Ballet Theatre (PBT), the Pittsburgh Symphony Orchestra (PSO) and the Pittsburgh Opera, attendees heard from Robin West, lead team physician for the Washington Nationals baseball team and associate professor at the Virginia Commonwealth University School of Medicine.

Although the coating tradition is nearly 30 years old, the format of the event drastically changed in 2018, thanks to input from late Pitt Professor Freddie Fu and his wife Hilda. Fu, who died in September 2021, previously served as chair of the Department of Orthopaedic Surgery and in numerous other health care leadership positions, including company physician for the PBT. He was particularly fond of his role as instructor and mentor and considered the White Coat Ceremony among his most favorite events of the year.

To forge connections between the incoming class, the School of Medicine and the cultural offerings in Pittsburgh, Fu and his wife organized exclusive performances from the PBT, the PSO and the Pittsburgh Opera — and the school continues to follow this precedent.

Fu also started another tradition: Every year, he led the incoming class in reciting the Hippocratic Oath, which marks students’ commitment to medical integrity.

Trustee emeritus and recent distinguished alumni fellow recipient Jack Smith delivered remarks at the ceremony, echoing the sentiments and values for young doctors that Dr. Freddie Fu would normally give to the matriculating class. He then led the Class of 2026 in pinning in remembrance of Fu.

The School of Medicine White Coat Ceremony was made possible thanks to support from Freddie and Hilda Pang Fu, the Pitt Medical Alumni Association and the generosity of Pitt Medicine supporters.

Pitt’s next White Coat Ceremony is the School of Dental Medicine’s on Friday, Aug. 26, at 2 p.m. in Alumni Hall’s 7th Floor Auditorium.