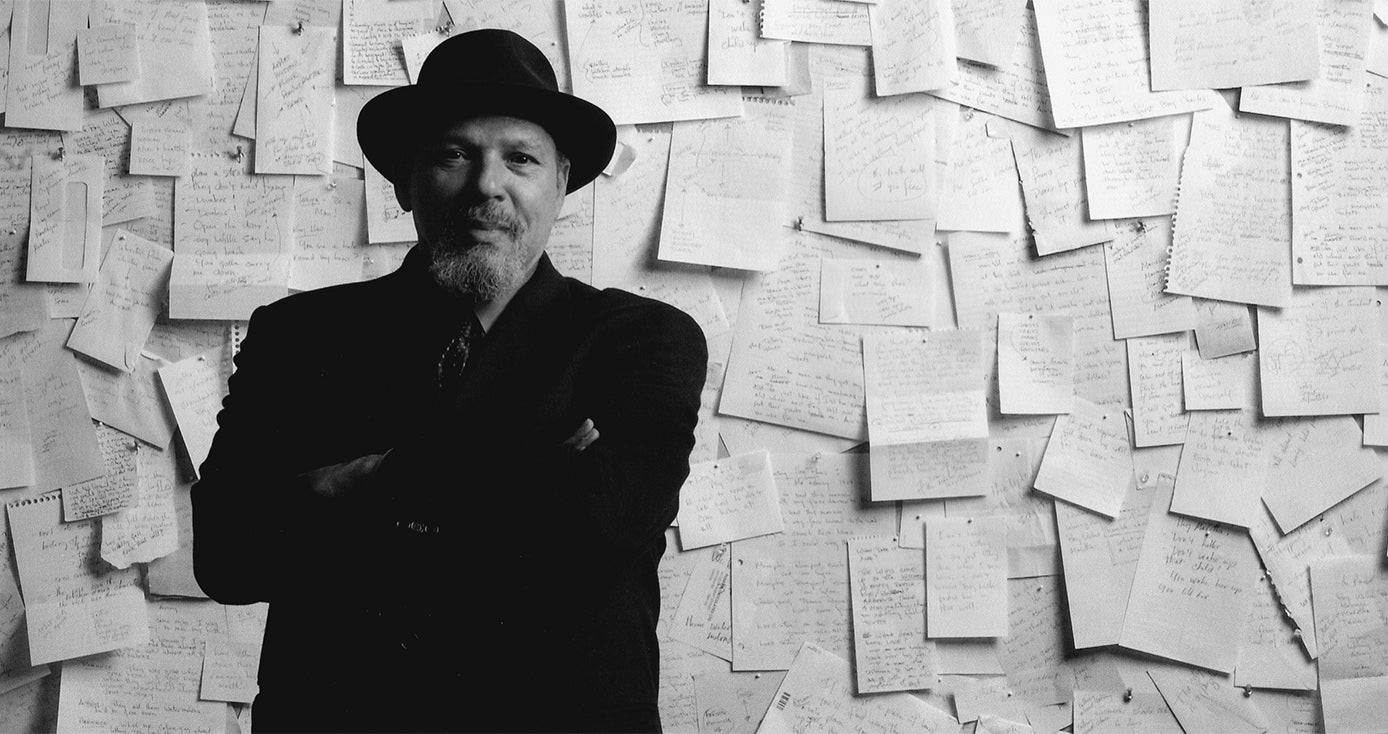 The University Library System (ULS) at the University of Pittsburgh has acquired the archive of the late playwright and Pittsburgh native son August Wilson, best known for his unprecedented American Century Cycle—10 plays that convey the Black experience in each decade of the 20th century. All 10 of the plays have had Broadway productions and two earned Wilson the Pulitzer Prize for Drama.

Check out coverage of this news in The Associated Press, Chicago Tribune and the Pittsburgh Post-Gazette.

Wilson, a master storyteller, honed his craft by walking the streets of his Hill District neighborhood as a young man, observing and immersing himself in Black street life, listening to old-timers talk about their daily lives. It inspired what would become his plays’ vibrant characters and lyrical language.

The ULS has acquired the August Wilson Archive through the help of Wilson’s widow, Constanza Romero, executor of the playwright’s estate.

“This acquisition is about more than bringing August Wilson back home to Pittsburgh,” said Pitt Chancellor Patrick Gallagher. “This archive deftly puts the experiences of Black Americans beneath an intimate magnifying glass and unpacks themes of injustice and inequity that are just as relevant today as when Wilson’s first play debuted. The University of Pittsburgh is proud to do our part in keeping August Wilson’s brilliance—for those in Pittsburgh and far beyond—alive, and we are deeply grateful to Constanza for entrusting us with this task."

“The origin of August’s connection with the city of Pittsburgh began with his grandmother Zonia Wilson, who in 1932 came north from Spear, North Carolina,” said Romero. “She and her family settled down in the Hill District, which in 1945, the year August was born, was a booming, diverse community.” 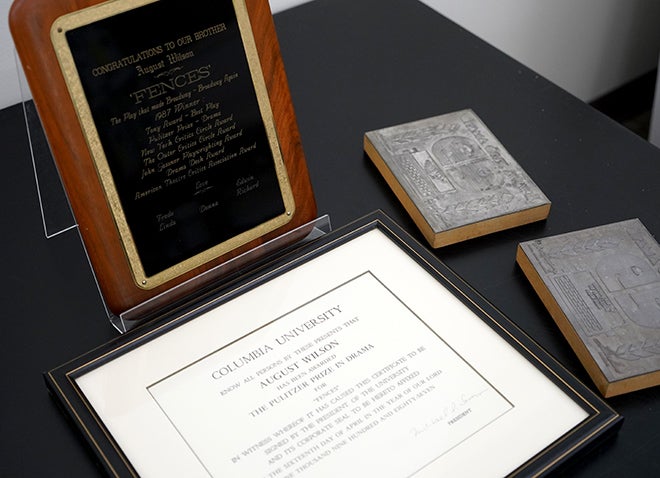 Romero says as the young writer experienced and observed racial injustice, the civil rights movement and the black power movement, he grew to be an activist, a poet and an artist producing political theater to bring consciousness to his community.

“He left Pittsburgh in 1978, but he took The Hill, the three rivers, the streets, the steel mills, the fish sandwich shops and the cadence of the language he heard in cigar stores and barbershops with him,” she said.  “This and more became the cultural richness that the playwright would pour into his 10-play magnum opus, The American Century Cycle, a breathtaking study of the African American struggle for cultural and economic preservation through the 20th century. The result of this hundred-year quest was and still is a literary and theatrical triumph, as August with each play calls upon the ‘memory of the blood,’ the careful examination of history which illuminates the discovery of the self, therefore the path to the future.”

Kornelia Tancheva, Hillman University Librarian and director of the ULS, calls the August Wilson Archive “the most significant archival collection the University of Pittsburgh has acquired to date.” She said it had been her dream to add the collection to Pitt’s holdings ever since she came to Pittsburgh three years ago.

Tancheva added: “It is an immense asset for researchers at Pitt, as well as nationally and internationally. It presents unprecedented opportunities for engagement for our students and the local community, including the local schools. The August Wilson Archive supports our mission of preserving and making accessible the cultural heritage of the region, the country and the world, and specifically our focus on underrepresented voices and the cultural production of African American artists.”

Indeed, Wilson called himself a Black nationalist and his American Century Cycle plays reflect his own personal call for social and racial justice. This falls in line with Pitt’s mission to reshape the University to be more diverse, inclusive and just, all while expanding its reach and impact in promoting social justice.

Gems from the collection

The August Wilson Archive will reside in a state-of-the-art home in Hillman Library’s renovated Archives & Special Collections. It contains significant physical and digital exhibition space, an expansive reading room and a large classroom, allowing for hands-on interaction with these and other materials.

Processing of the collection—more than 450 boxes of materials—will commence in early 2021.

Pitt Associate Professor of History Laurence Glasco, co-author with Christopher Rawson of “August Wilson: Pittsburgh Places in his Life and Plays,” saw some of the materials himself at Romero’s home five years ago. “That the full collection is now in Pittsburgh and available to researchers is the fulfillment of a long-held dream of myself and other Wilson scholars,” he said.

Rawson, a board member of August Wilson House and retired member of the Pitt English Department faculty who taught a course on Wilson for 14 years, was the person who initially introduced Tancheva to Romero.

“I am very grateful to Chris Rawson, the recently retired Post Gazette theatre critic and a professor at Pitt, as well as a long-time friend and supporter of August Wilson and his legacy, who introduced me to Constanza in the first place," said Tancheva. "Without him that first, most important, contact would not have happened.”

A natural fit for the University of Pittsburgh 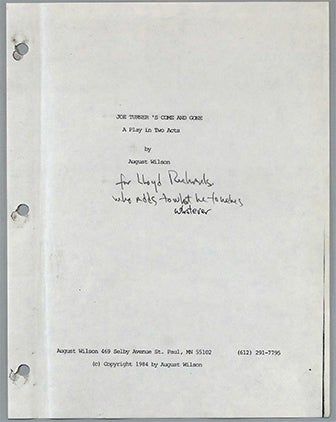 Pitt is the natural home for the August Wilson Archive because, while he lived there, Wilson was an active part of Pittsburgh’s vibrant Black performing arts community. He and Nick Flournoy, Rob Penny and Chawley P. Williams were part of the Centre Avenue Poets. Wilson and Penny, who eventually became a Pitt professor, cofounded the Black Horizons Theater, which staged plays between 1968 and 1972 that reflected Black consciousness and culture.

Kuntu Repertory Theatre took shape in 1975, with Penny as its playwright-in-residence, continuing the Black Horizons Theater’s legacy. Kuntu’s founder and Pitt Associate Professor of Africana Studies Vernell Lillie staged Wilson’s play “Homecoming” in 1976, his first play to be produced by a theater company. Wilson himself directed a Kuntu play in 1977 and, along with Penny, founded the Kuntu Writer’s Workshop. Bob Johnson, another friend and collaborator of Wilson’s, also on the Pitt faculty, directed the premier of “Jitney” in 1982 for the Allegheny Repertory Theatre. Pitt’s Archives & Special Collections also houses the Kuntu Repertory Theatre Collection and the papers of Vernell Lillie and Bob Johnson.

The archives will significantly augment the Pittsburgh legacy of Wilson’s life and work, already celebrated through the August Wilson African American Cultural Center (AWAACC) in Downtown, Pittsburgh and August Wilson House, the playwright’s childhood home on Bedford Avenue in the Hill District.

Tancheva added, “We are already closely collaborating with the AWAACC to provide materials for their ‘August Wilson: The Writer’s Landscape’ permanent exhibit on August Wilson’s life and work, scheduled to open in 2021—the first-ever permanent exhibition dedicated to Wilson. We have already started reaching out to other potential collaborators in Pittsburgh and at the University. This acquisition helps to solidify Pittsburgh’s reputation and significance as the birthplace of one of America’s great writers, and a bedrock of Black performing arts.”

"This exceptional archive will inform and inspire scholars everywhere for decades to come," said University of Pittsburgh Provost and Senior Vice Chancellor Ann E. Cudd. "It is the ultimate testament to August Wilson's enormous contributions to the literary world. Growing up in Pittsburgh's Hill District, the city helped to shape his brilliant creative vision. I find it particularly meaningful, then, to have the collection come home—and we are proud to house it in Hillman Library."

The ULS intends to make the August Wilson Archive available for research, programming and engagement to local, national and international audiences. It plans deep and productive collaboration with faculty at Pitt, sharing the collection materials through compelling displays and working with Pitt’s Community Engagement Centers, one of which is located in the Hill District, to develop community-based programming. 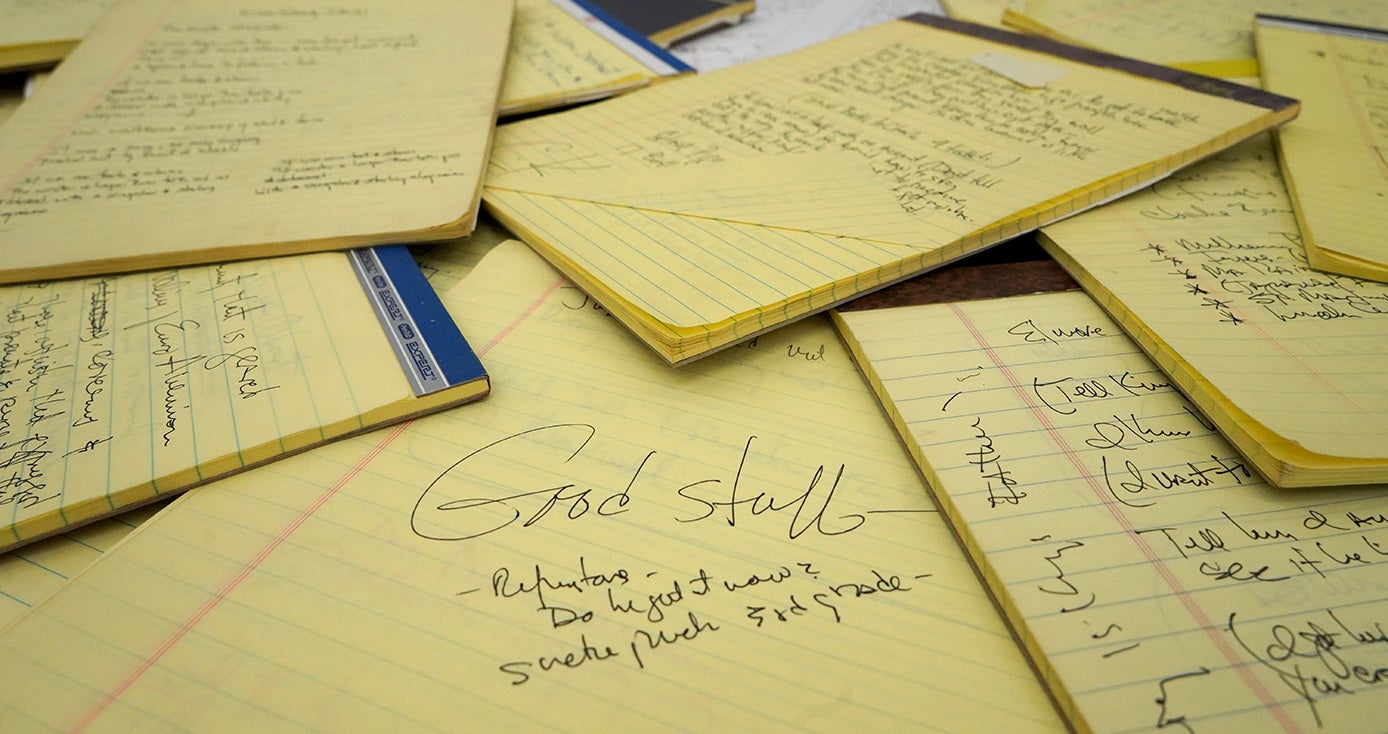