They Did the Monster Math 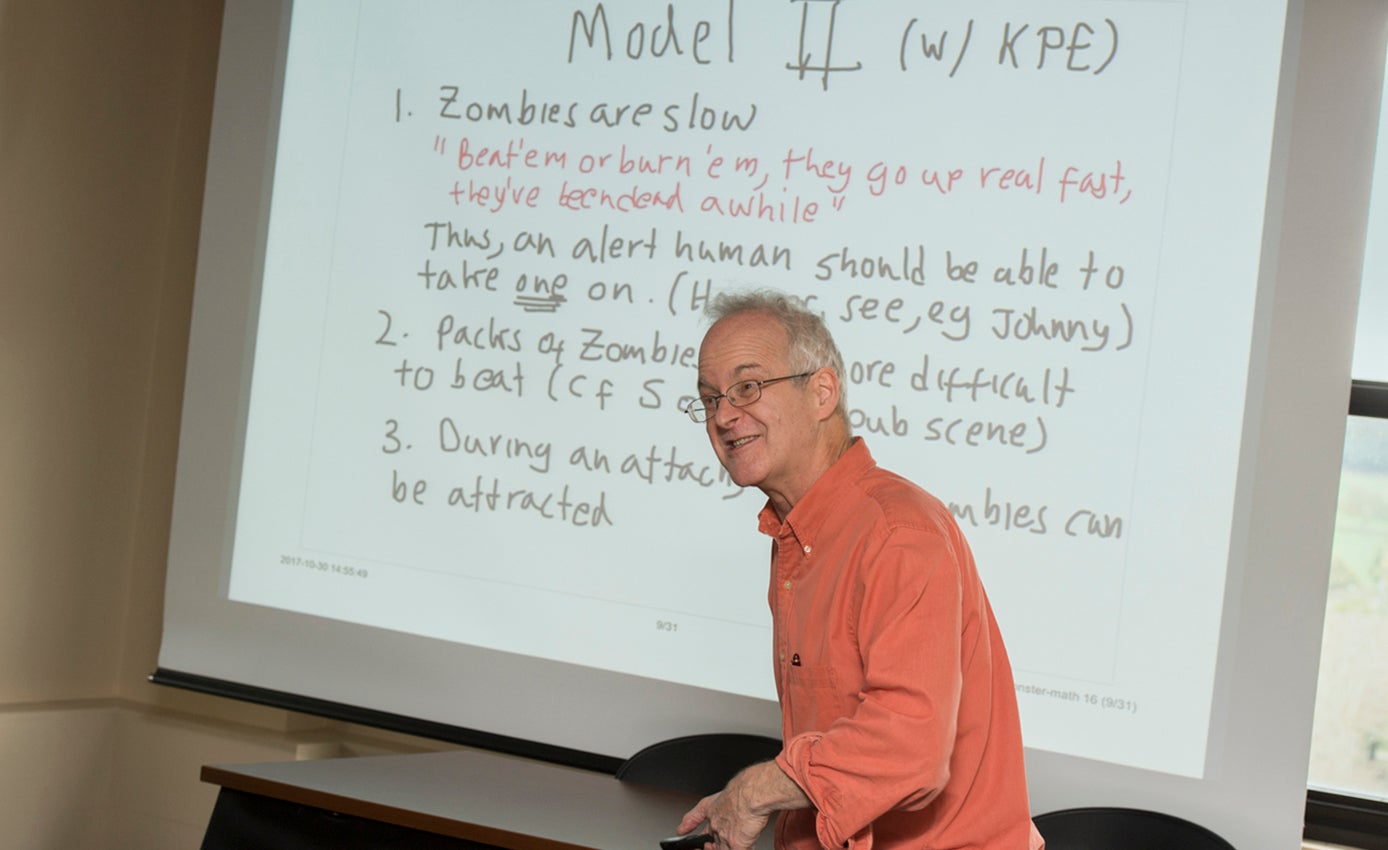 Update: In 2020, Ermentrout gave a virtual version of this favorite lecture, via Zoom of course.

“With Halloween just around the corner, Dr. Ermentrout's fantastical look into a potential zombie apocalypse (possibly with some vampires hiding in the shadows) was a great way to prepare for the season while also getting a mathematician's perspective on the whole scenario,” said Jake Baumbaugh, president of the Undergraduate Math Club. “While it was certainly a fun introduction to differential equations, the great takeaways here we the memorable movie clips and Dr. Ermentrout's energetic style of teaching. When next October rolls around, I'll be looking forward to this just as much as any time-honored tradition.”

The odds of the zombie apocalypse striking Pittsburgh, or anywhere else for that matter, are pretty much zero. But that doesn’t stop Distinguished University Professor of Mathematical Biology G. Bard Ermentrout from playing devil’s advocate every Halloween with an exercise that breaks down the math behind surviving hordes of infectious monsters.

Around 30 students gathered in the William Pitt Union on Halloween for Ermentrout’s seventh Monster Math lecture­­ ­— a day of zombie and vampire film clips, discussions on creepy creature strengths and Achilles’ heels and a discussion of problem solving that ended with the complete annihilation of either monsters or the human race.

The exercise may be based on fiction, but the math behind it is used by epidemiologists and researchers across the globe to save lives every day, said Ermentrout. He explained to the students that skills learned at Monster Math could be applied to working on the set of a zombie film or to tracking the spread of an epidemic at the Centers for Disease Control and Prevention.

“The nice thing about the zombie model and vampire model is it works for every disease. Every disease model is basically the same thing,” Ermentrout said.

For Ermentrout, an energetic figure who donned a hazmat suit and held a bag of blue rock candy in homage to Walter White from “Breaking Bad” for part of the lecture, the occasion is a chance to merge a love of monster movies with an affinity for mathematical models used in real-life scenarios to track the spread of infectious disease.

Ermentrout's Monster Math equations start off as greater than one to represent a spreading zombie infection, but this year’s equations upped the ante to include models that represented humans being eaten by, enslaved by or turned into vampires. Thankfully, as always, there were also variables to help humans fight back in the end.

This particular intersection of concepts is a personal favorite for the professor, who recently published “When Humans Strike Back: Adaptive Strategies for Zombie Attacks” with his son, Kyle Ermentrout, and is working to publish a paper titled “Vampire and Human Servants! Oh My!”

Derek Orr, a 23-year-old graduate student studying mathematical biology, said the Monster Math lecture has become a favorite among math majors, with students drawn in by the professor’s quirky and charismatic delivery.

“If you have people talking about vampires, that’s pretty cool, and people are interested in how the math ties into it. It doesn’t seem like it does but it really does,” Orr said.

For as much fun as he’s had with zombies over the years, Ermentrout admitted that adding a more dynamic monster allows for more complex equations and better exercises.

“Zombies are kind of monolithic, kind of stupid,” he said. “They’re cool but brainless. Vampires make it more interesting.”