The students behind ReSolution—a self-cleaning contact case—are wasting no time getting their company off the ground.

The ink is barely dry on their ceremonial big check for the top prize of $25,000 in the 2021 Randall Family Big Idea Competition, but they are already preparing to create a startup company.

What began as a classroom project for Pitt engineering students Evan Kerin, Magdalen Daluga, Lia Franco and Brendan Mostek has transformed during the past month into a startup company built around their invention.

“The competition not only gave us an incentive to pursue this idea further, but it provided us with the criticism and mentorship we needed to take our project to the next level,” Kerin, a junior chemical engineering major, said.

Kerin said the prize money will be deployed to develop a functioning prototype of the device, which they will share with a group of beta testers to get feedback in order to refine it.

Similar to the quick pivot for the 2020 competition, this year’s events were conducted entirely virtually.

“We had fewer teams this year, understandably,” said Babs Carryer, director of the Big Idea Center for student innovation and entrepreneurship. “What we lacked in numbers we made up for in quality.”

See all of this year’s winners, from a breath-based disease detection platform to a quick-capture music recording tool. 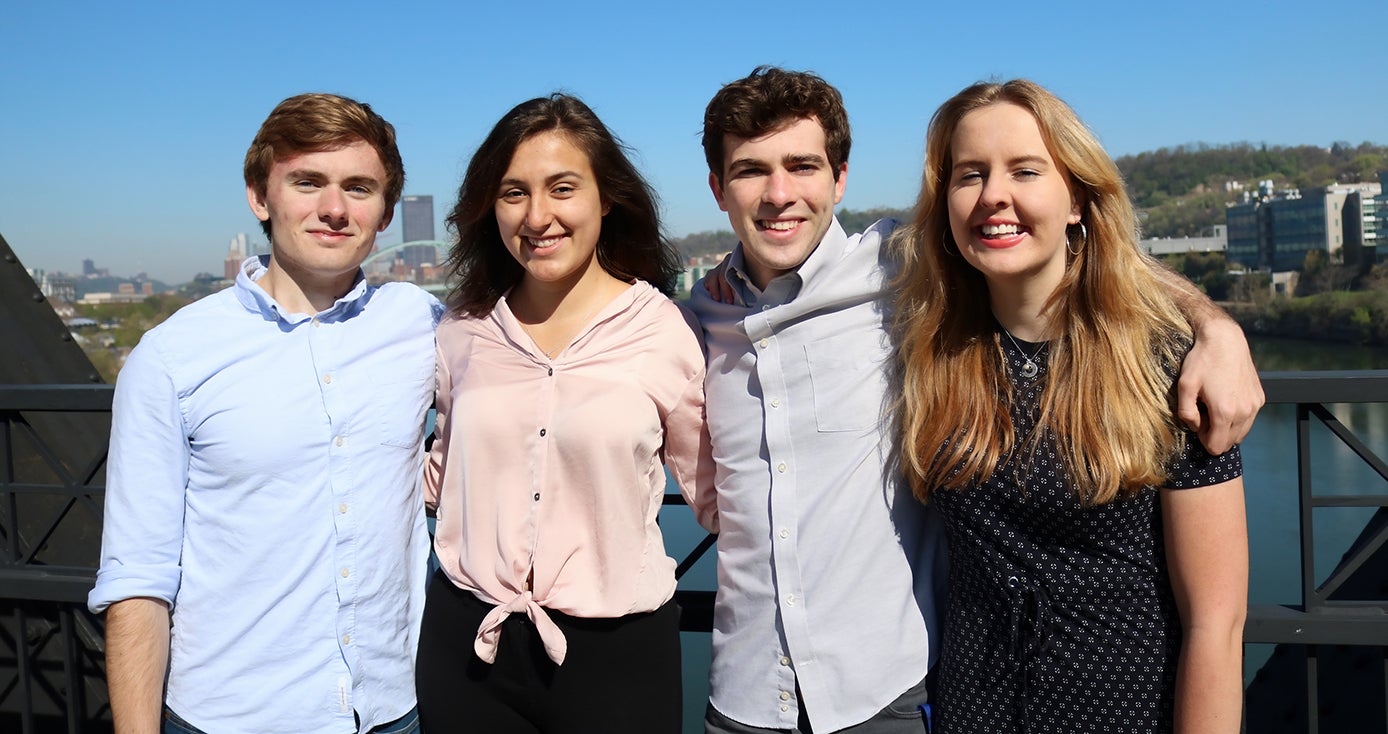 The competition, now it its 13th year, spans February and March of each year and is open to students of all levels, first-year to postdoc, across the University. It begins with a bootcamp, then teams are introduced to a mentor to help them refine their idea and their presentation. After two elimination rounds, finalist teams are selected and proceed to a practice pitch where they receive additional feedback on their ideas and their presentations before a final pitch is done in front of an audience of volunteer judges from the local innovation and entrepreneurship community.

Additional cash prizes are awarded for second and third places and best video. Since its inception the competition has attracted hundreds of interdisciplinary teams seeking to bring their big ideas to market.

Read a Q&A with the ReSolution team

Pitt’s Big Idea Center caught up with the grand prize winning team, ReSolution, to discuss how four engineering students became entrepreneurs and what their next steps are to bring their idea to life.

This year’s students received words of encouragement from the competition’s founder, Pitt trustee Bob Randall, as well as from former participants who have used the competition as a springboard to launch their own companies.

“Clearly you have been bitten by the entrepreneurial bug. It will sustain you going forward in a big way,” Randall said.

Big Idea Center alumni also offered advice to the teams that did not win a monetary prize.

Mohamed Morsy (ENGR ’20), a co-founder of Canal Electronics, urged students to not give up on their ideas. He pointed out that he, junior bioengineer Nick Kshatri and Matt Rosenblatt (ENGR ’20) first devised their idea for a device to extend phone battery life by preventing overheating as first-year students in the Swanson School of Engineering. They entered the competition in 2018 and 2019 and did not receive a prize. But they broke through to receive a cash award last year and have since been featured in the Pittsburgh Business Times and Forbes, and have conducted a successful crowdfunding campaign to develop a prototype of the device.

Rob Rutenbar, Pitt’s senior vice chancellor for research, commended the participants on their embrace of the hard but rewarding work of entrepreneurship.

“As you have doubtlessly learned by now, entrepreneurship is a journey filled with ups and downs, disappointments and successes, and often painful pivots when you discover that your original idea or hypothesis, no matter how proud you are of it, does not align completely with your potential customer’s wants and needs,” Rutenbar said. “It is this perseverance and ability to seek creative solutions to problems that will serve you well throughout your life no matter what paths you follow.”