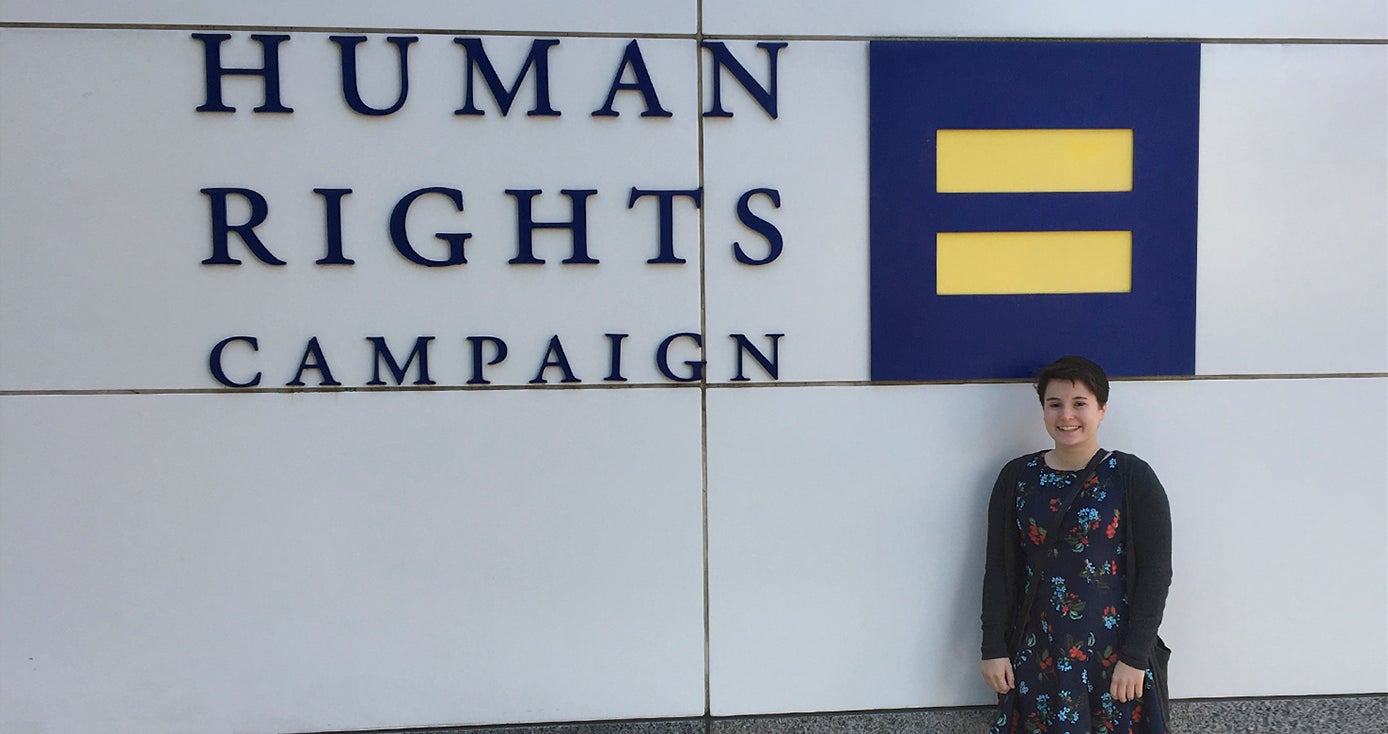 The first-ever, nationwide Live Proud on Campus contest — sponsored by AT&T and the Human Rights Campaign — last year awarded Pitt student Amy Kelley and two other finalists a $10,000 scholarship and $2,500 in funding support. The charge: Develop a project to increase LGBTQIA+ awareness and acceptance on their college campuses.

Now a senior and resident assistant studying social work and applied developmental psychology in the School of Education, Kelley is in the process of pilot testing an as-yet unnamed program that aims to create dialogue among students around identity, acceptance and differences. She is assembling a team of peer facilitators to lead discussions and be visible student allies.

This fall, Pitt senior and national Live Proud on Campus award winner Amy Kelley is pilot testing a version of the Allies Training program with student groups. Contact Sherdina Harper in the Office of Cross Cultural and Leadership Development to rainbow.vicepres [at] pitt.edu (subject: HRC%20Pilot%20Program) (learn more about the pilot program).

This month, the University earned a 4.5 out of 5 rating on the Campus Pride Index for the second year in a row. The index is a national benchmarking tool for colleges and universities to measure inclusivity and safety in their communities.

Also this month, the Pitt Queer Professional faculty and staff affinity group received recognition from Vibrant Pittsburgh for championing diversity, equity and inclusion in the workplace. Chancellor Patrick Gallagher was honored at the ceremony as well.

She didn’t have far to look for idea inspiration.

“Pitt already has such a strong foundation” of LGBTQIA+ inclusivity, Kelley said.

The Gender, Sexuality and Women’s Studies program, interdisciplinary entities like the Office of Diversity and Inclusion and active student groups including Rainbow Alliance, contribute to an already thriving culture of acceptance. Students also can choose gender-neutral housing and access resources specific to LGBTQIA+ health needs.

As a resident assistant, Kelley said she understood that many early social connections made at college happen in residence halls. She saw an opportunity there to expand the reach of some of Pitt’s recognized programming.

Pitt attracts people from all corners of the world, and “a lot of students haven’t lived in a world of diversity” before coming to college, said Sherdina Harper, cross cultural programming coordinator and adviser in Pitt’s Office of Cross Cultural and Leadership Development.

Beck Bailey, deputy director of employee engagement at the Human Rights Campaign Foundation’s Workplace Equality Program in Washington, D.C., and supervisor to Kelley’s project, added that for some people, coming to college is the first time they’ll interact with an openly LGBTQ+ individual.

That’s part of what spurred HRC’s collaboration with AT&T on the Live Proud on Campus contest, Bailey said. AT&T was one of the first American employers to establish LGBT ally and resource groups and to offer transgender-inclusive health care benefits, among other supports.

At Pitt, employee allies often make themselves visible with signage or syllabus statements. Harper said that an online database of faculty, staff and student leaders in the Allies Network program is currently in the works for even greater visibility.

“But that’s still a very limited percentage of the Pitt community,” Kelley said. “I want to spread it out.” 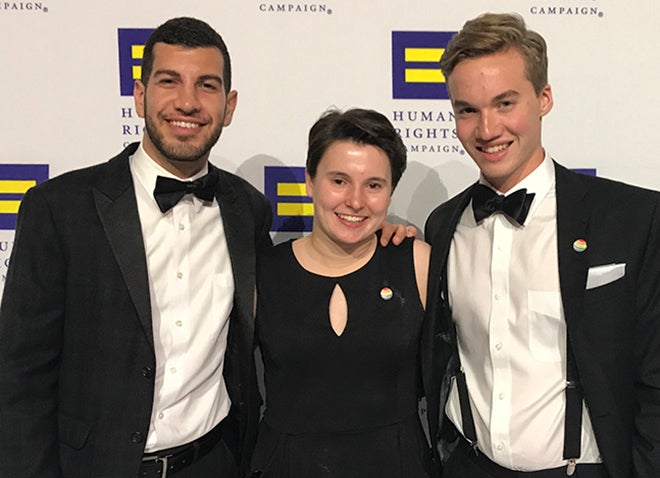 Some of the Live Proud grand prize money might go toward designing a logo similar to the Allies Network rainbow stickers to help identify peer allies sensitive to LGBTQIA+ issues for the student body at-large, she said.

“It takes time. You’re not just going to change someone’s mind. But giving them the resources and helping them understand” can really make a difference, Kelley said.

“A lot of people understand the LGB part; we’re getting there on the T part,” with transgender representation. “But the QIA+ is often left out of the acronym,” said Kelley, who identifies as lesbian. In particular, she said, queer, questioning, intersex and asexuality can be overlooked. Lots of people think “the A stands for ally. It can, but there’s also other things,” including asexual, agender or aromantic.

“I’m not going to assume you know, or don’t know — or believe this, or that. But let’s just talk about it. And maybe it makes you uncomfortable. And maybe learning more helps ease that a little,” she said.

“I want to make something that will last beyond my time here,” Kelley said. It’s important “to let everyone know this is a safe place to live and feel welcomed.”