Pittsburgh’s Neighborhood 91 will be home to futuristic manufacturing 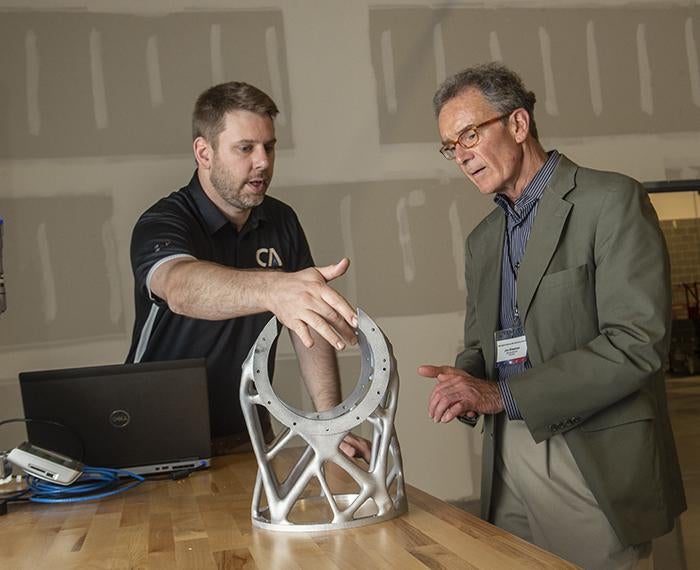 Pittsburghers are known for being neighborly, but one recent neighborhood event attended by University of Pittsburgh Chancellor Patrick Gallagher was a little different than most. Speaking to a crowd in a cavernous warehouse on the Neighborhood 91 campus on June 21, Gallagher kicked off a two-day event citing Pittsburgh’s innovative history and touting the region’s burgeoning defense manufacturing community.

“We always tell the story of Western Pennsylvania as a story of metal production — and it is — but the reality is that this economy was always built on innovation,” said Gallagher. “At one time this was the materials science capital of the world. I like to believe we’re not creating a new future but reinventing and strengthening that core ability. As a university, that’s what we’re here for.”

Hosted by the AIM Higher Consortium, a Department of Defense-funded initiative that includes Pitt, the event brought together academics and representatives from DoD agencies and manufacturers to promote defense-related manufacturing and research in the region. Pitt’s Center for Advanced Manufacturing has been an active participant in the consortium, including former staff member Liza Allison, now at Carnegie Mellon University.

One signal of the region’s promise for defense manufacturing was the event’s venue: Just down the road from Pittsburgh International Airport, Neighborhood 91 is intended to host an active community of companies that make use of 3D printing. Speakers made it clear that the project was picking up steam despite delays due to the COVID-19 pandemic. Two companies have already moved in, with more likely on the way soon.

Though Pitt won’t maintain space at Neighborhood 91, the University has been involved with the campus’s development from the beginning. In his talk, Allegheny County Airport Vice President Bernie McShea spoke of hatching the idea in Chancellor Gallagher’s office along with U.S. Steel Dean of Engineering James Martin II.

“We realized that the strengths we have in advanced manufacturing here [in the Pittsburgh region] could benefit from a one-stop shop,” he said.

Attracting companies that use a variety of cutting-edge manufacturing techniques is just one piece of that vision. The campus is intended to accommodate the entire advanced manufacturing pipeline, including companies that provide the raw materials (“powders”) for 3D printing. The technology — more complex than the increasingly commonplace and affordable polymer 3D — is a focal point of research at the Swanson School of Engineering, which has some of the most advanced metal printers in the U.S.

Arencibia, Neighborhood 91’s first tenant, will provide argon recycling services on the campus, providing cheap and eco-friendly access to a gas that’s important for several steps in manufacturing. Add that to a miniaturized power grid that delivers enough electricity to power 13,000 homes and easy  access to a major shipping hub, and you have the foundation of a complete ecosystem for futuristic manufacturing.

“We can get tenants sharing metal powders, sharing recycled argon, all of these services that make your life easier as an additive manufacturer,” said McShea. “We saw that this approach would bring together all of the elements of the supply chain needed for the industry.”

So far, those tenants include Wabtec, a Pittsburgh-based Fortune 500 company that manufactures parts for the rail industry, and Cumberland Additive, a company focused on 3D printing for a variety of industries, including aerospace.

Albert To, William Kepler Whiteford Professor in the Swanson School of Engineering, echoed Gallagher’s excitement about the cutting-edge new residents of the facility. To is one of several Pitt professors whose main area of study is 3D printing, and he’s already working with Wabtech to troubleshoot one of its processes called “binder jetting.” The parts made by binder jetting are a loose collection of powder that must be sealed together by firing it at a high temperature, which shrinks and deforms the part. “They want me to figure out a way to model that deformation so they can account for that deformation in their design,” said To.

Attracting more companies focused on 3D printing to the region, To said, will translate into a greater demand for basic research and Pitt courses on these topics. And building closer relationships with industry engineers will allow him and other researchers to ensure they’re tackling problems that the industry needs solved.

“We want our research to be useful and to make connections to practical applications,” he said. “Hopefully this starts a trend of attracting well-known talent to the region so we have more opportunities for research collaborations that advance the field.”

As the neighborhood fills up with new tenants, those opportunities should only expand.

“Neighborhoods are made of people, and here we are now getting together and building the band, so it’s really exciting for me to see this,” said Gallagher. “This is where it gets to be a lot of fun.”