A brief history of the Backyard Brawl 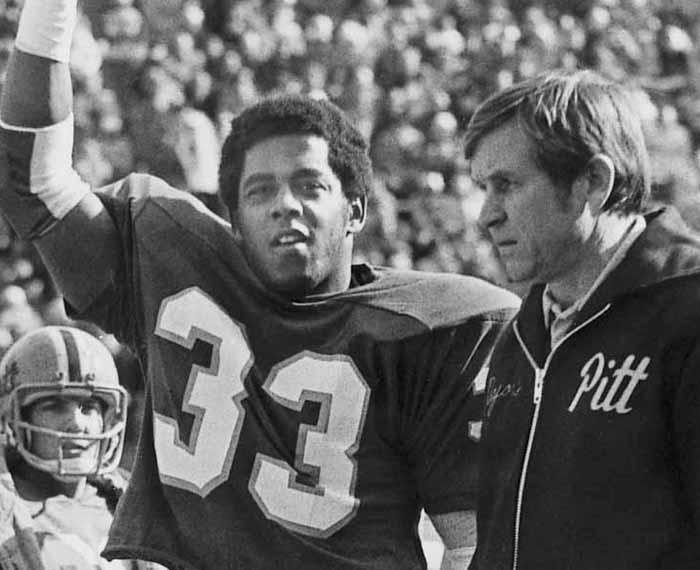 From 1895 to 2011, the Pittsburgh Panthers and West Virginia Mountaineers traveled the 75 miles between the institutions to meet on the gridiron in a game known simply as the Backyard Brawl. Following the dissolution of the Big East, the two teams have not met in more than a decade.

This September, the Panthers and Mountaineers will meet once more as part of a four-year series to revive one of the nation’s most contentious rivalries. With not only local but also national eyes on this year’s matchup at Acrisure Stadium, Pittwire decided to revisit the history of the matchup and look into some of the most historic moments in the series.

The first meeting of the Backyard Brawl took place in 1895 in Morgantown, West Virginia, before Pitt changed its name from Western University of Pennsylvania. With touchdowns still only counting for four points at the time, the game was decided by two West Virginia touchdowns. The first came from Josiah Keely, while the second is a bit more interesting.

Pitt player John Rugh caught a West Virginia punt behind the goal. West Virginia argued they should get credit for a touchdown, while Pitt argued it should be a touchback. After heated discussion, the teams reportedly decided to credit it as a safety, which would make the score 6-0. However, Morgantown newspapers declared the final score to be 10-0 and Pittsburgh newspapers declared it as 6-0.  Now, both schools list the final score in their record books as 8-0.

The 1921 matchup was the first college football game ever broadcast on the radio. Legendary radio announcer Harold W. Arlin provided play-by-play on KDKA. The game was played at Forbes Field, Pitt’s first on-campus stadium which also served as the home of the Pirates and Steelers until 1970 and 1963, respectively.

The 1965 meeting of the Backyard Brawl was one of the highest-scoring college games ever played at the time. Teletype operators across the country messaged the Mountaineer Field press box throughout the game, asking if the score was real.

West Virginia’s quarterback, Allen McCune, threw for 320 yards and 5 touchdowns, while running back Garrett Ford, Sr. rushed for 198 yards and 2 touchdowns. Ford, Sr. also had 76 receiving yards and another touchdown through the air. Although Pitt responded with four rushers combining for 214 rushing yards and four touchdowns, it was not enough to keep up with the Mountaineer offense. The loss was Pitt’s first in a stretch of six losses in seven games that included a 69-13 loss to Notre Dame. Improbably, the Panthers ended a 3-7 season by upsetting Penn State.

Led by future College Football Hall of Fame head coach Bobby Bowden, West Virginia got out to a 35-8 lead at halftime. Pitt responded by changing their offense to a Power-I scheme and rallied for four touchdowns.

“That is still my darkest day in coaching,” said Bowden in 2014, later claiming he could have been physically harmed by irate West Virginia supporters had he not kept his team in the locker room for an extra hour to give the fans enough time to disperse.

All-American running back Tony Dorsett (pictured at top) starred for the Panthers in 1975, rushing for almost 1,700 yards and 13 touchdowns. However, even his 112-yard performance was not enough for the Panthers. Ranked 20th in the country going into the game, the unranked Mountaineers upset the Panthers 17-14.

West Virginia walk-on kicker Bill McKenzie's game-winning field goal in the closing seconds led to one of the longest postgame celebrations ever at old Mountaineer Stadium. West Virginia would not win another Backyard Brawl until 1983.

Dorsett’s dominance continued in his senior year, rushing for 2,150 yards and 22 touchdowns, becoming Pitt’s first (and to this day only) Heisman Trophy winner. In 1976’s Backyard Brawl, Dorsett rushed for 199 yards and 3 touchdowns. Infamously, he was also ejected from the game in the final minutes after both teams spilled out into a literal brawl in front of the Pittsburgh bench at midfield.

Pitt’s rookie head coach Walt Harris led Pitt to a triple overtime victory over West Virginia in 1997. Pitt was led by quarterback Pete Gonzalez, who threw for 273 yards and 5 touchdowns, including the game-winning 12-yard touchdown pass to Terry Murphy.

The victory broke a five-year Backyard Brawl streak for West Virginia and capped off a 6-5 regular season for the Panthers. The win made Pitt eligible for its first bowl game in eight years and began the school's turnaround following six losing seasons in seven years.

Perhaps the most significant Backyard Brawl in the series history, Pitt infamously upset then-No. 2 West Virginia on Dec. 1, 2007, in the series’ 100th meeting. Then-undefeated West Virginia entered the game as 28-point favorites over the 4-7 Panthers. Many national outlets expected West Virginia to easily win and contend for the National Championship against Missouri.

However, Pitt’s defense stepped up to shut down the Mountaineer’s historic offense. Led by head coach Rich Rodriguez and electric quarterback Pat White, West Virginia had a top 10 offense in the entire country. Future NFL star LeSean McCoy would rush for 148 yards for the Panthers and Upper St. Clair native Conor Lee’s two field goals would push Pitt over the top.

"It was just a nightmare," said WVU coach Rich Rodriguez. "The whole thing was a nightmare."

Despite Pitt winning two Backyard Brawls in a row going into the game, West Virginia would come out on top over the then-No. 8 ranked Panthers, 19-16. The 2009 game, which was one of the most viewed games in ESPN2 history, was largely impacted by West Virginia kicker Tyler Bitancurt, who went 4 for 4.

Dion Lewis rushed for 155 yards and Jonathan Baldwin received for 127 yards and a touchdown, but Pitt could not fight their way back into the game. Although Pitt would also lose to No. 5 Cincinnati the next week, they finished the season 10-3 with a victory in the Meineke Car Care Bowl. It was Pitt’s first double-digit-win season since 1981.

The most recent meeting of the Backyard Brawl took place in 2011, when the 5-6 Panthers lost 21-20 to the 8-3 Mountaineers. Although leading by 13 early in the second half, the Mountaineers would rally, led by running back Shawne Alston. In addition, the Mountaineer defense managed to sack Tino Sunseri 10 times.

With Pitt leaving to the ACC that offseason and West Virginia heading to the Big 12, the 2011 game seemed to be the last time the teams would ever meet. Now, starting in 2022, the Panthers and Mountaineers will once again travel I-79 and continue one of the nation’s most physical and heated rivalries.

Editor's note: Thanks to historian John Antonik who helped us confirm that, while many outlets say the first brawl took place in Wheeling, it was actually in Morgantown.