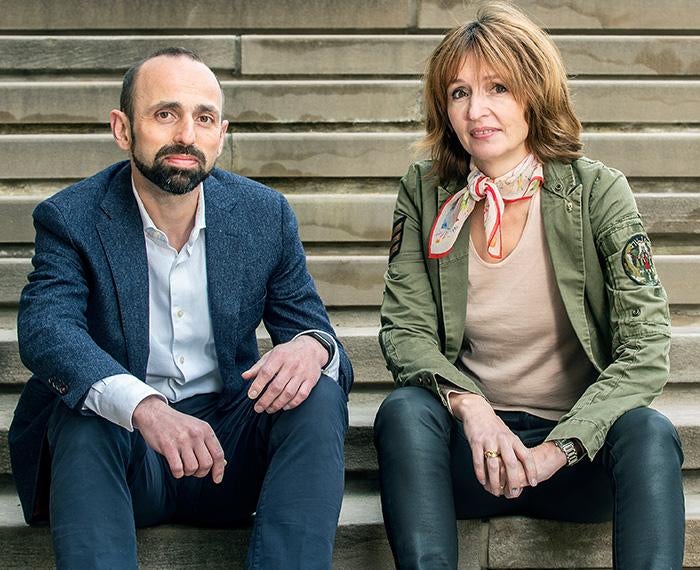 Alongside a humanitarian disaster resulting from Russia’s invasion of Ukraine is a second, less visible crisis: one of mental illness stemming from the war. Two University of Pittsburgh psychiatrists are raising money to aid Ukrainians who are impacted, using their expertise to provide support where it’s needed most.

“There are two emergencies unfolding: One is trauma, and the second is disruption of infrastructure and treatment to those who are already mentally ill,” said Alexandre Dombrovski, associate professor of psychiatry and Pittsburgh Foundation Endowed Professor in Mind and Brain Research in the School of Medicine. “When we think about an evidence-based approach to relief, mental health interventions are very cost effective. It feels like an enormous undertaking, but a lot can be done with fairly limited resources.”

Dombrovski, a Moscow native, was spurred to action both by his knowledge of the post-Soviet mental health care system and by his shame at Russia’s aggression. Pitt Associate Professor of Psychiatry Carmen Andreescu also has a personal connection to Ukraine — but as a native of Romania, the invasion instead resonates with her generational trauma from oppressive Soviet rule.

While billions of dollars of U.S. military aid are headed to Ukraine, that support still leaves significant unfilled needs for civilians. Andreescu and Dombrovski are working with the Federation Global Initiative on Psychiatry (FGIP), a network of mental health care nongovernmental organizations that has been operating in the area for decades, to help fill those gaps. They’re seeking both individual donations and connections to larger potential donors.

“It hits very close to home,” said Andreescu. “But I’m now in a position where, due to these unique connections, maybe we can do something to help.”

Mental illness is more stigmatized in Ukraine than in the U.S., and before the invasion Ukraine’s mental health system was in the process of reform from a repressive post-Soviet system that relied on involuntary hospitalization. Many of those in urgent need of psychiatric treatment are now not in central hospitals, Dombrovski said, but are distributed throughout a network of smaller care homes that have been difficult to supply.

Adding to the challenges, some patients were also evacuated from front line hospitals, leading to overcrowding in facilities elsewhere. Others were simply discharged. “Many families were either gone by then or in the process of leaving, and some of the patients were left behind. And they don’t have access to any care or outpatient medications,” said Dombrovski.

One project the duo’s fundraising supports aims to address that challenge: Vans for Tanya, led by psychiatrist Tatyana Dergach, who has been delivering medications and basic necessities like food and water filters to mental health institutions.

Along with fundraising for supplies, Dombrovski and Andreescu are helping ensure that needed medications make it to the right places. “What is lacking are the logistics, distribution and needs assessment — the work of finding out what is the stock in that hospital pharmacy, what specific medications are needed and what strengths,” Dombrovski said.

Another project the funds support is one aimed at Ukrainians experiencing trauma as a direct result of the invasion — an online platform that provides mental health resources and routes those in crisis to counselors who speak Ukrainian and Russian. Due to the urban nature of the conflict and indiscriminate shelling in some areas, Dombrovski said, “It really is a war like no other we have seen. You can imagine the psychological impact of that on people.”

Future work by FGIP will focus on restoring a hospital that had to be moved to an antiquated building in the western region of Ukraine, making it more comfortable for patients while also creating a model unit that will deliver mental health care that’s more modern and patient-centered. The plan is one step toward encouraging modernization and reform in the Ukrainian mental health system after the war is over.

In the present, though, Dombrovski and Andreescu’s focus is simply on helping those in crisis.

“Even a small amount here may cover someone’s medication for months,” said Andreescu. “Every contribution here is making an impact there.”

Nancy Glazener taught a short course on gender to displaced Ukrainian students
Two Pitt psychiatrists are raising money to stem Ukraine’s mental health crisis
The war in Ukraine will be fought in court, too. Here’s how Pitt’s School of Law is helping.