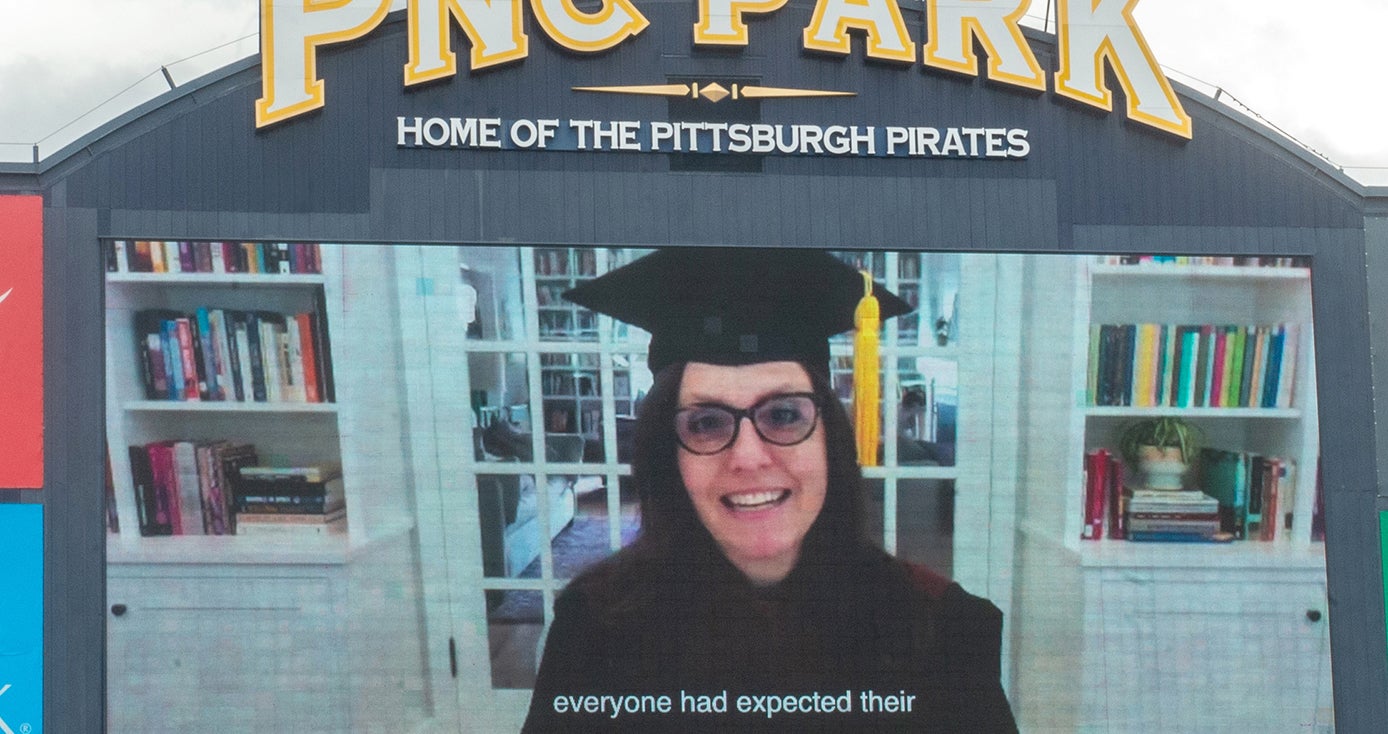 At the May 4 commencement ceremony, Skloot shared stories with the Class of 2021 about the significance of following your curiosity and taking the time to recognize what she describes as the “what moments” in life: “Moments that just make you stop and go wait, what?”

Such moments happen all the time, all around us. One such moment for Skloot occurred when she learned about a woman named Henrietta Lacks and her monumental contribution to science in a basic biology course. That moment of curiosity and the idea of who this woman was and why no one knew anything about her stuck with Skloot and, eventually, it led her down a path that she never imagined she would be taking.

Read more about Skloot in the winter 2018 issue of Pitt Magazine, and read some of her writing in the Pitt Med magazine archives.

Skloot is the author of the No. 1 New York Times bestseller, “The Immortal Life of Henrietta Lacks,” a story of a young Black woman who died of cervical cancer in 1951 and left behind an inexplicably immortal line of cells knows as HeLa. Lack’s cells were harvested without her knowledge or consent and contributed to scientific advancements as varied as the polio vaccine, treatments for cancers and viruses and in vitro fertilization.

Named The Best Book of 2010 and one of the 100 Books to Read in a Lifetime by Amazon.com, the book was made into an Emmy Nominated HBO film starring Oprah Winfrey.

Recognizable for its engaging, straightforward language, Skloot’s writing has charmed people around the world and has been featured in The New York Times Magazine, Popular Science, The Chicago Tribune and many other publications.

Skloot received a Bachelor of Science in biological sciences from Colorado State University and completed her Master of Fine Arts in creative nonfiction at the University of Pittsburgh. Skloot also is the founder and president of The Henrietta Lacks Foundation, which strives to provide financial assistance to needy individuals who have made important contributions to scientific research without their knowledge or consent.

Heumann, a lifelong advocate for the rights of disabled people, was granted a Doctorate of Public Service in the Field of Rehabilitation Law and Science at the School of Health and Rehabilitation Sciences ceremony, held May 2.

In her speech, Heumann emphasized how important it is for disabled individuals who have studied in the fields of health and rehabilitation sciences to work with those who don’t have disabilities to enrich the work being done at Pitt and other universities.

Catch the ceremonies you missed

It’s been an action-packed spring celebrating the Class of 2021. Visit Pitt’s commencement website to watch any ceremonies you might have missed.

Heumann contracted polio in 1949 and began to use a wheelchair for mobility. At the age of 5, she was denied the right to attend school because she was considered a “fire hazard.” Her parents played a strong role in fighting for her rights, but Heumann was determined that she, working in collaboration with other disabled people, had to play an advocacy role due to continuous discrimination.

Heumann is now an internationally recognized leader in the disability rights community.

She served in the Clinton and Obama administrations and was a senior fellow at the Ford Foundation.

Heumann is featured in the documentary, “Crip Camp: A Disability Revolution,” which won a 2020 American Award.She also is an author of her memoir, “Being Heumann: An Unrepentant Memoir of a Disability Rights Activist,” along with Kristen Joiner.

She is now the producer of “The Heumann Perspective,” a podcast and YouTube channel that aims to share the beauty of the disability community.

Heumann has received numerous awards including being the first recipient of the Henry B. Betts Award along with the Max Starkloff Lifetime Achievement Award from the National Council on Independent Living.

Hassmiller offered a wealth of advice in her address to the Class of 2021 nursing graduates at the April 30 School of Nursing commencement ceremony.

“Build expertise around your passion. Read everything you can. Conduct research. Publish and present on your area of expertise, and then raise your hand when it comes to serving on a committee and drafting policy. The world is run by those who show up,” says Hassmiller.

Hasmiller serves as the senior advisor for nursing at the Robert Wood Johnson Foundation where she shapes and leads the foundation’s nursing strategies in an effort to create a higher quality of care.

In partnership with AARP, Hassmiller directs the foundation’s Future of Nursing: Campaign for Action, which seeks to ensure that everyone in America can live a healthier life. She is co-director emeritus of the Future of Nursing Scholars program, a PhD scholarship program meant to build the leadership capacity of nurse educators and researchers.

Hassmiller served with the Health Resources and Services Administration, where she was the executive director of the U.S. Public Health Service Primary Care Policy Fellowship and oversaw other national and international primary care initiatives.

A member of the National Board of Governors for the American Red Cross, Hassmiller served as chair of the Disaster and Chapter Services Committee and national chair of the 9/11 Recovery Program.

An elected member of the National Academy of Medicine, Hassmiller is a fellow in the American Academy of Nursing and sits on a number of other advisory committees and boards.

The recipient of numerous national awards, most notably, Hassmiller received the Florence Nightingale Medal in 2009, the highest international honor given to a nurse by the International Committee of the Red Cross.