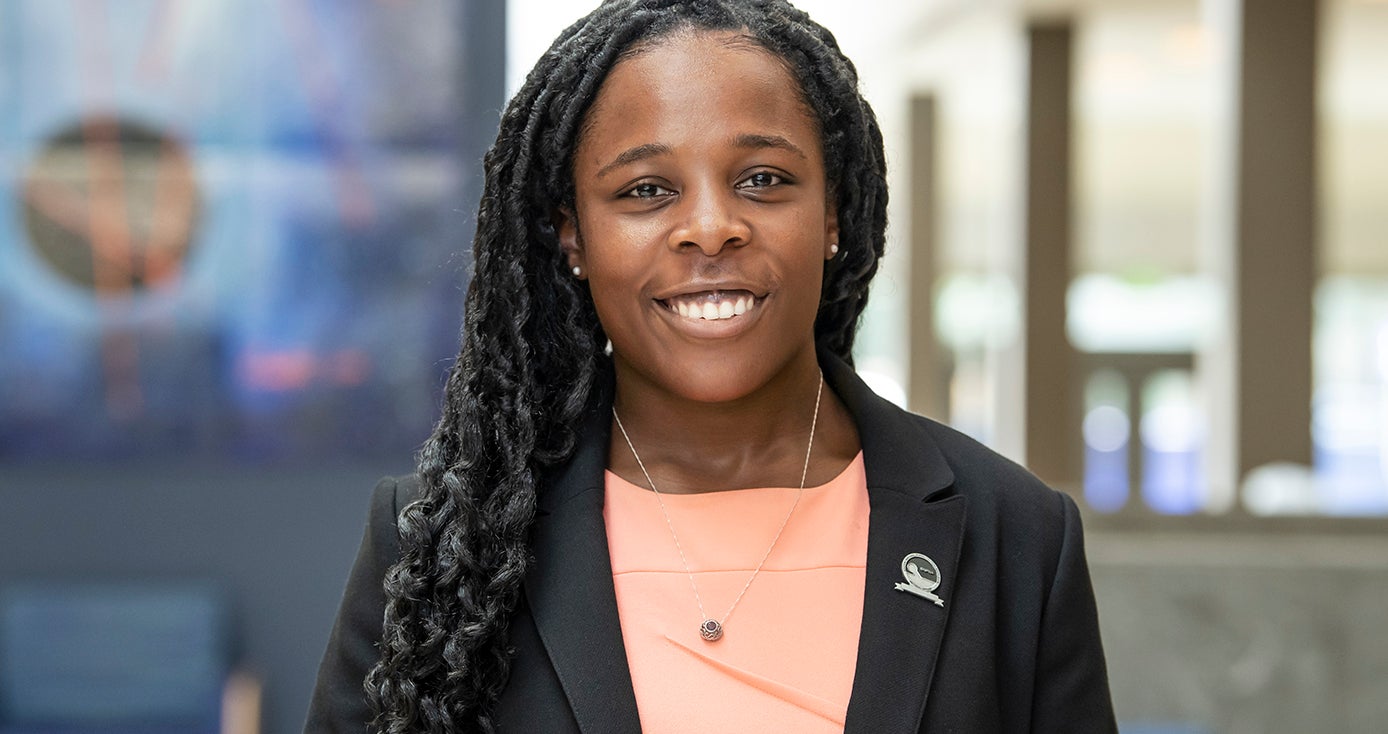 When University of Pittsburgh student Kathy Monangai stood on stage in front of 300 peers and pharmacy professionals in July, an important question came before her.

“Which would you rather be: Always on time and average, or always late and exceptional?”

The stage was at the Student National Pharmaceutical Association’s 72nd annual national convention in Houston, Texas, and her answer would help inform an election committee panel tasked with choosing a new national vice president for the association.

“I was very nervous, and I found out my grandmother passed away the day before. I was thinking about her, because people like her made me into the woman I am,” said Monangai, a Doctor of Pharmacy candidate at Pitt, reflecting upon her time at the conference. “But what I basically said was, ‘Since I am working on being on time and I strive to be exceptional, I would say late and exceptional. However, those that are always on time and average, who may not be exceptional, will always have a place and value to any team.’”

The next morning, amidst applause, her name was announced as the new VP.

For Monangai, the national conference is a long way from entering Pitt as a first-year student in 2013 — when she had no interest in pharmacy. Prior to enrolling in the School of Pharmacy, she was on her way toward obtaining a bachelor of science in chemistry.

“My family is full of pharmacists,” said Monangai, a Roseland, New Jersey, native and a first-generation Cameroonian-American, her parents immigrating to the U.S. in the late ’80s. “I tried to do something different from that, but I knew I wanted some sort of health care career, more specifically to help children.”

During her sophomore year in 2014, however, she became a pharmacy technician at a New Jersey pharmacy and got firsthand experience, having an epiphany during her time there.

“I thought that I could be most impactful by serving as a pharmacist, because I saw myself wanting to stop children from being unnecessarily admitted into hospitals,” she said. “I was passionate about preventative health and stopping medication errors for children, as well as their caregivers. Pharmacists are the most accessible health care professionals since we’re everywhere.”

After returning to Pitt’s campus, she met with Marcia Borrelli, director of student services at the School of Pharmacy.

“I remember being so thrilled that she wanted to become a pharmacist,” said Borrelli. “She is a very compassionate person and truly wants to make a difference.”

Since then, Monangai has been dedicated to bringing pharmacy needs to underserved populations and bringing more people from underrepresented populations into pharmacy and other health care professions, coincidentally two of the main goals of the Student National Pharmaceutical Association.

Monangai served as the president of Pitt’s chapter in the association the year prior to her election to national vice president. During her chapter presidency year, she led a group of students as the first student pharmacy organization to represent the School of Pharmacy at the university-sponsored Community Engagement Center in Homewood in Pittsburgh. These efforts resulted in winning a bid to host a regional conference for the association.

She also was involved in the Black History Cultural Showcase in February, where health sciences students celebrated black culture with emphasis on African-American medical pioneers at Pitt; her chapter won the Pitt Blue Stars Red Carpet Cultural Program of the Year Award at the showcase. She also helps guide and mentor prospective pharmacy students as an RxAmbassador.

“Kathy is an extremely competent leader as president [of Pitt Pharmacy's association chapter] and in the many activities she’s been involved with; she led with clarity, compassion and vibrancy,” said Lauren Jonkman, assistant professor of pharmacy and therapeutics and faculty adviser for Pitt’s association chapter.

“I am so proud of Kathy for running for a national position and not at all surprised that she would rise to the top amongst her peers. I am thrilled that the national association now has a VP who is guided and fueled by moral values, passion for service and maturity. In her future, any program or position Kathy will work with will be elevated by her skill and effectiveness.”

Monangai said she credits her upbringing for her path.

“My mother would always say ‘Leave a place better than you found it,’ and I always took that to heart,” she said. “Our family would help out at soup kitchens and an aunt of mine who taught at a community college would bring home some community service initiatives for our family to do.”

Said Borrelli: “That is who Kathy is; she is the most patient and inclusive person I know. She values everyone and is genuinely kind.”

After graduating with her doctorate, Monangai plans to complete a year of pharmacy residency training at a children’s hospital someplace new, neither in Pittsburgh nor New Jersey.

“I have always subscribed to the school of thought that if I go someplace I’m not familiar with and put myself out of my own comfort zone, that’s where I will grow the most,” she said. “I’m open to going anywhere.”