The University of Pittsburgh will be the region’s first institution to tap into an innovative new plan to harness the flow of Pittsburgh’s rivers as a source for clean, reliable electricity.

Pitt has signed a letter of intent to purchase 100 percent of the power from a low-impact hydroelectric plant to be built on the Allegheny River at the existing Allegheny Lock and Dam No. 2, just below the Highland Park Bridge.

Rye Development, a Boston-based firm specializing in low-impact hydropower generation and energy storage, is in the process of designing and permitting the plant, which expects to begin commercial operation in 2022.

Pitt’s investment in hydropower may be its largest-ever commitment to renewable energy, but it’s by no means the first step toward meeting energy and emissions reductions specified in the 2018 Pitt Sustainability Plan.

Pitt’s fiscal year 2017 greenhouse gas (GHG) inventory — the most recent of these triennial GHG reports — shows a 22.2 percent reduction from the 2008 baseline, a trend that puts the University on a trajectory to halve its GHG emissions by 2030.

Electricity generation accounts for about half of the University’s GHG emissions, making the addition of hydropower an important part of Pitt’s continuing progress.

The facility will generate about 50,000 megawatt hours of power annually — enough to supply about 25 percent of Pitt’s electricity needs on its campus less than five miles away.

This investment — Pitt’s largest-ever commitment to renewable energy — keeps the University on target to meet energy and emissions reductions specified in the 2018 Pitt Sustainability Plan. The plan calls for the University to produce or procure 50 percent of its electricity from renewable sources by 2030, while reducing its greenhouse gas emissions 50 percent from a 2008 baseline.

“This is a significant step toward meeting Pitt’s sustainability goals,” said Aurora Sharrard, the University of Pittsburgh’s director of sustainability.

The hydropower plant also will be used as a learning center for small on-site classes, education and University outreach.

“This hydroelectric plant not only will help power our campus, it will serve as a resource for enhancing student learning opportunities and will be a tangible sign of our commitment to sustainability on campus and throughout the region,” said Greg Scott, Pitt’s senior vice chancellor for business and operations.

“As a research institution and community anchor, we are committed to leading by example with sustainable practices that will help future generations thrive in a world that is environmentally responsible, socially equitable and economically robust.” 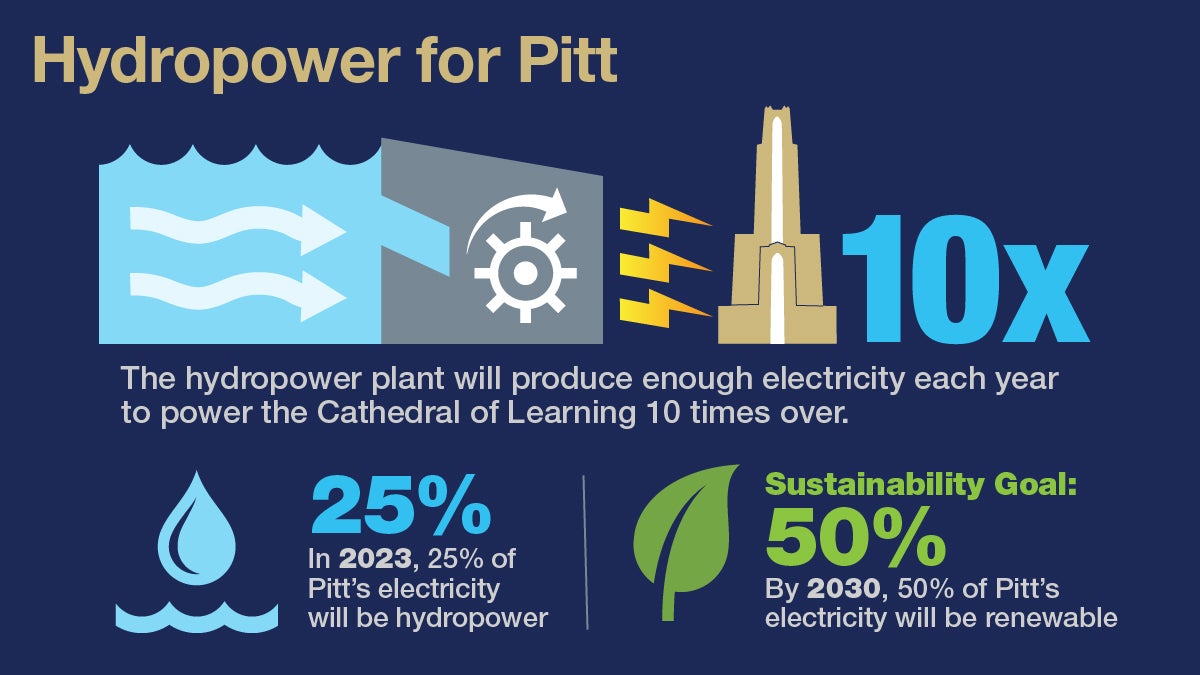 “Pitt students have been vocal advocates for sustainability, and I'm pleased that Pitt is listening. Taking strong action to reduce carbon emissions ensures that we will have a livable world for generations to come,” he said.

“I’ve learned a lot about sustainability at Pitt and I think this action will attract even more students who care about building a sustainable future,” said Ressin, a junior who is pursuing a joint major in economics and statistics in the Kenneth P. Dietrich School of Arts and Sciences and a Global Studies certificate in ecology and sustainability. “I’m proud to say my university is doing its part.”

This low-impact hydro plant at Allegheny Lock and Dam No. 2 will be the first of eight potential hydropower facilities planned by Rye to capture energy from Pittsburgh’s three rivers.

“Pitt’s leadership in sourcing a significant percentage of its power from Pittsburgh’s rivers is a positive step for the University and for the region as well,” said Paul D. Jacob, Rye Development’s chief executive officer.

“It’s been nearly three decades since a new hydropower facility was constructed on the Allegheny River. Pitt’s commitment to this first new source of clean, reliable energy helps set the stage for the addition of hydropower to more of the region’s existing locks and dams,” Jacob added.

“The University’s investment in local hydropower will benefit the campus, the region and the local economy for generations to come.”