He, They, She: Zooming with Jonathan Van Ness 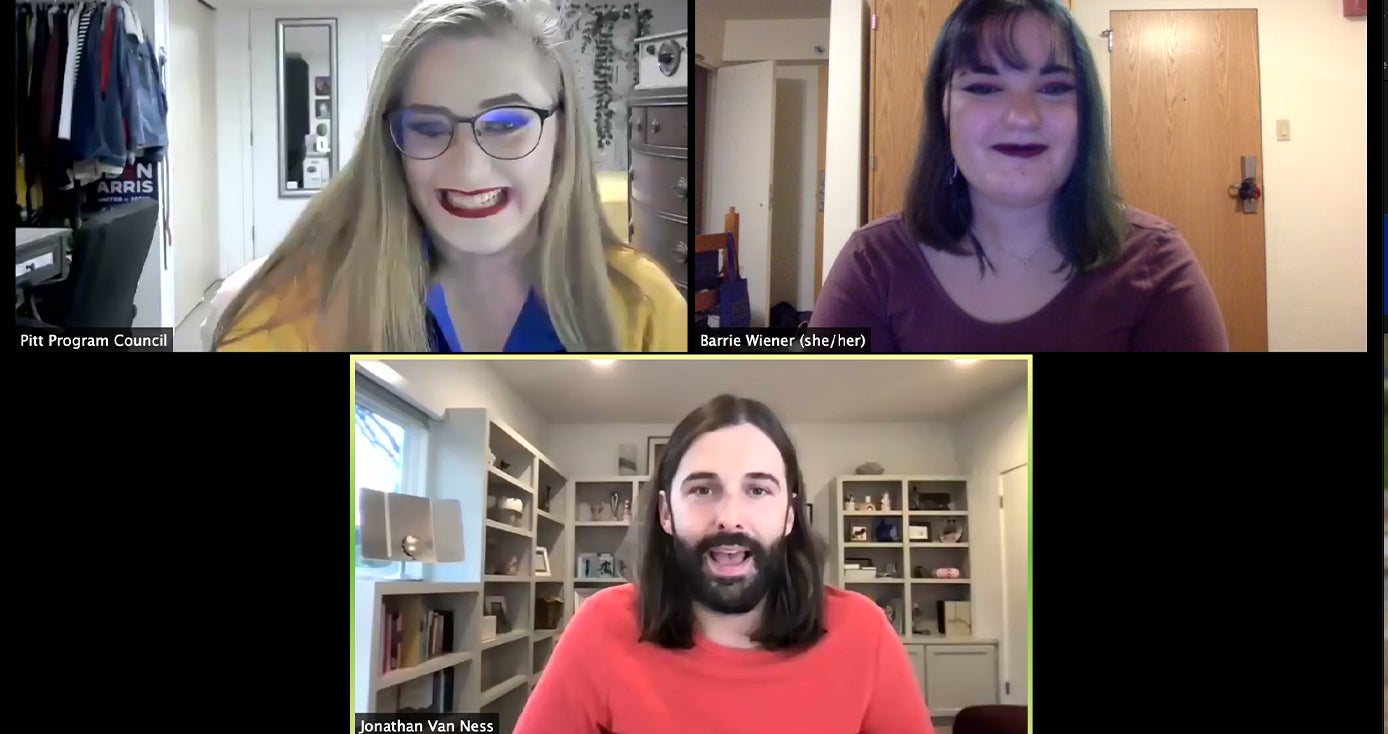 Van Ness began by sharing that, aside from taking care of his cats and the essential self-care spa bath, pandemic life has made him double down on advocacy, noting that isolation can be especially challenging for young members of the LGBTQ community and can have dangerous ripple effects toward mental health and homelessness.

One of the first questions was about Van Ness’ role models. He replied with a list of legendary equality fighters including Sylvia Rivera, a gay liberation and transgender rights activist; Marsha P. Johnson, a well-known activist of the 1969 Stonewall uprising; and Rudy Galindo, a former competitive skater who is openly queer and HIV positive. Van Ness, who recently came out as non-binary, said that having these role models and the language to express the feeling inside was part of his life’s journey.

‘Queer’ is a fierce word

When asked about how he felt about the word “queer,” Van Ness replied with a sharp and eloquent claim on the word. No matter how you say it—whether you mean it as a “gorgeous” word or not—the word “queer” is a testament to those making their way through a world that was not made for them, he said. If you’re saying it in a derogatory way, Van Ness added, that’s on you.

He reflected on his own use of the identifier as well, “Trailblazers and trans women and nonbinary and gender non-conforming people who came before me used the word ‘queer’ as an identifier and taught me to be proud of and taught me to use that. That is the strength of the people who came before us who allow me to be here so I’m not going to censor myself.”

Want to be a good LGBTQ+ ally? Vote.

Later, a Pitt Program Council advisor asked, “As an LGBTQ+ advocate and spokesperson what advice can you give today’s students, staff and faculty at the University of Pittsburgh to improve inclusivity on campus?”

Citing recent pieces of anti-transgender legislation passing in record numbers across the country and an upcoming Pennsylvania primary election on May 18, Van Ness explained that local elections matter and can have life-changing consequences for the LGBTQ+ community.

Further, he noted the Lavender Scare moral panic during the 1950s and 60s where workers in the U.S. government in the LGBTQ+ community were asked questions about their identity by their employers who were essentially looking for cause to terminate them. These policies persisted into the 90s and beyond. Activist work and lawsuits eventually led to official abandonment of the practice.

‘We are having a party; we’ve survived the pandemic’

The conversation took place on the eve of Van Ness shooting season six of his show, “Queer Eye.” Van Ness expressed excitement for getting to back to a new normal, and that he is looking forward to a post-pandemic life filled with unlimited selfies with fans, hugs and human interaction.

Van Ness reflected on the past year’s de-humanization of society at large, describing a “constant literal carnage” that forces people to ignore things happening around them and to keep moving.

While he looks forward to resuming activities like figure skating and getting back on stage for stand-up comedy, he also hopes that post-pandemic life will be healing and give us the chance to begin connecting again in the human experience.

“How do we humanize each other again and communicate and really respect and love and nurture each other? When we come back out of this and we can connect again, I hope that is a moment where we can appreciate each other and this human experience.”