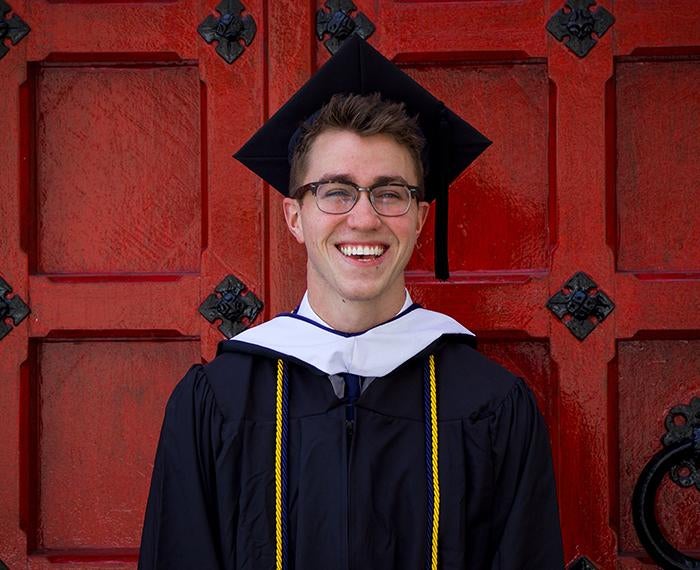 Many college students struggle to balance challenging courses, household chores and relationships. Having to work to pay bills and make ends meet only adds more stress.

That’s why attorney and University Honors College alumnus David C. Frederick (A&S ’83) established a scholarship to support students working part- or full-time jobs while they complete their education at the University’s Pittsburgh campus. The award provides $12,500 in tuition support and is renewable for a year. It is available to sophomores with at least a 3.5 GPA and who received no other merit scholarships upon admission. This year’s deadline to apply is March 31.

Chandler Mitchell (A&S ’18, pictured above), is one of 19 students who have received the scholarship since it began funding students in 2016. Now a third-year medical student at Pitt, Mitchell said receiving the Frederick Scholarship allowed him to significantly reduce his hours at Stack’d, an Oakland restaurant where he worked during college.

“I was less stressed, worked less and was able to pursue research and volunteer,” Mitchell said. “I could finally take care of my daily expenses.”

Originally from Lancaster, Pennsylvania, Mitchell has wanted to become a doctor ever since he took a high school anatomy and physiology class.

“I could not see myself studying anything else,” he said.

But as a first-generation college student, he worried about paying for his education. “The scholarship was a really great opportunity to focus,” he said.

As he prepares to finish medical school, Mitchell wants to enter an internal medicine residency and eventually work in oncology or palliative care. He has been able to gain research and volunteer experience in both fields during his time at Pitt.

One tenet of the Frederick award is paying it forward any way you can, and Mitchell said he hopes to have the opportunity to do something similar for future students.

When asked for advice to give to anyone considering this award, Mitchell said, “Just apply. It can be tremendously helpful.”

Justin P. Jones is a student reporter for Pittwire.