Frances Hesselbein, a Pitt visionary and one of the world’s ‘greatest leaders,’ has died at 107 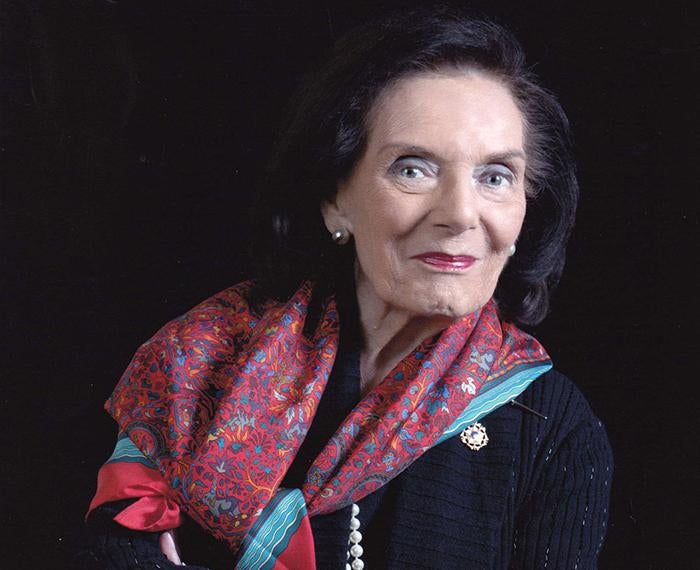 Hesselbein left her hometown of Johnstown, Pennsylvania, and rose to spend more than seven decades in the world of executive management, becoming a transformational, motivational and global figure along the way. A skilled and sensitive visionary, she inspired students, CEOs and a long list of others to pursue service, inclusion and community as key values to leadership.

The former CEO of Girl Scouts said her guiding motto was “to serve is to live,” as she believed that the bottom line was measured not in dollars and cents but in changed lives.

“Frances’ actions and example shaped generations of leaders at a time when smart and sensible governance has never been more critical. And her personal credo — to serve is to live — infused her every step,” Chancellor Patrick Gallagher said. “At the University of Pittsburgh, we are honored to do our part to continue sharing her story and legacy through initiatives like the Hesselbein Global Academy for Student Leadership and Civic Engagement and the Hesselbein Lecture Series. She was a beloved member of our University community, and I extend my deepest condolences to her family and many loved ones during this difficult time.”

Hesselbein received numer­ous awards from the University, includ­ing an honorary doctoral degree in 2001, a University medallion as a distinguished alumna and induc­tion into the inaugural group of preeminent alumni called Legacy Laureates.

In 2009, Pitt established the Hesselbein Global Academy for Student Leadership and Civic Engagement to honor her and advance her life’s work. When the academy opened, Hesselbein said, it “is all about leadership, ethics and destiny … our times call for ethical leaders with a moral compass that works full time.”

The academy brings together student leaders from across the globe with the aim to produce experienced and ethical leaders who will address critical national and international issues and advance positive social and economic initiatives throughout the world.

In 2017, Pitt’s Graduate School of Public and International Affairs (GSPIA) launched the Frances Hesselbein Leadership Forum, formerly the Frances Hesselbein Leadership Institute. Managed by GSPIA’s Johnson Institute for Responsible Leadership, the forum became a place where research and learning advance the art and science of leadership and public service. Among other programming, the forum hosts a lecture series and continued the publication of the award-winning Leader to Leader journal.

“Frances Hesselbein inspired all of us with her ‘to serve is to live’ philosophy. She demonstrated this approach throughout her career — through her words, through her engagement with others and truly in all aspects of her life,” GSPIA Dean Carissa Slotterback said.

“She helped develop, amplify and demonstrate a conception of leadership that goes well beyond formal leadership positions and roles. She has truly helped all of us to understand that leadership is deeply personal and an act of love and care for others. We are so grateful host the Frances Hesselbein Leadership Forum at Pitt and GSPIA, as an enduring home for learning and engagement inspired by her work.”

When Gallagher thanked Hesselbein in 2021 for her continued support of the academy, she told him, “I love being part of the Pitt community. I know that our future is bright when we invest and support our student leaders. And our students are remarkable!”

Kenyon R. Bonner, vice provost for student affairs, reflected on the warmth, service and influence the thoughtful leader left behind.

“Frances Hesselbein’s legacy is profound and will persist in the lives of the people and organizations she impacted throughout her long and meaningful career. Her philosophy of service and leadership conveys a deep understanding of humanity, a spirit of selflessness and a devotion to people. I am grateful for her vision and investment in future leaders around the world through the University of Pittsburgh’s Hesselbein Global Academy, which Pitt had the honor of hosting with Frances for 14 years.

Sarah Popovich, assistant director of leadership education in the Division of Student Affairs, served as manager of the Hesselbein Global Academy.

“Frances Hesselbein’s teachings and leadership philosophies have provided a robust foundation and guiding force for the Hesselbein Global Academy’s curriculum. Her messages, such as ‘to serve is to live’ and ‘leadership is a matter of how to be, not how to do,’ strongly resonate with academy participants well after their participation has concluded,” Popovich said.

“It is incredible to hear stories from alumni about how the academy and Frances’ teachings continue to have an important role in their own leadership journeys,” she added. “Her generosity and commitment to mentoring young leaders is truly inspirational. Her legacy will live on in the many lives she has touched throughout her life, mine included.”

In the summer of 2017, Albert Tanjaya was a Pitt sophomore majoring in computer science. He was also the youngest participant in the Hesselbein Global Academy, where he had a chance to meet Hesselbein.

“She was this living legend,” he recalled.

He was impressed with her energy and her ability to attract and influence people from different walks of life. “She seemed to connect with everyone,” said the native of Oakland, California, where he now works as a consultant on ethical issues of artificial intelligence enterprises.

Tanjaya (SCI ’20) went on to serve for two additional years as a mentor with the Hesselbein Global Academy. “They gave me the leadership philosophy I follow today,” he said, “I carried the idea of ‘to serve is to do’ into student government and my young adult life and professional world.”

Hesselbein’s leadership acumen has been recognized across not just at Pitt and in higher education circles, but also the military, civic and community engagement organizations and private enterprise.

In 2015, Fortune magazine ranked her as one of “The World’s 50 Greatest Leaders,” putting her in company with figures such as Pope Francis, Apple CEO Tim Cook, and Mark Zuckerberg, cofounder and CEO of Meta.

Hesselbein was awarded the Presidential Medal of Freedom, America’s highest civilian honor, by President Bill Clinton in 1998 for her leadership as CEO of Girl Scouts of the United States of America from 1976-1990, as well as her service as “a pioneer for women, volunteerism, diversity and opportunity.” Her contributions were also recognized by President George H. W. Bush, who appointed her to the Presidential Commission on National and on Community Service.

From 2009-2011, Hesselbein served as the Class of 1951 Chair for the Study of Leadership at the U.S. Military Academy at West Point in the Department of Behavioral Sciences and Leadership. She was the first woman and the first non-graduate to serve in this position.

A lifetime of leadership

Hesselbein credited the University of Pittsburgh with launching her on the path to leadership.

In the early 1930s, as a 17-year-old, she managed to scrape together $235 to attend one semester at the University of Pittsburgh at Johnstown, which at the time comprised just two floors in Johnstown High School. Six weeks into that first semester, her father died, and she had to trade full-time classes for a full-time job. But she said those Pitt classes, which she managed to take in the evenings and on Saturdays, inspired a passion for lifelong learning.

“It was the most amazingly rich education, and those two floors became magic — an inspiring symbol of excellence and equal access,” Hesselbein told a University audience in 2010. “My journey began long ago at my beloved Pitt and continues to this day.”

It was also in Johnstown, in 1960, that she began her engagement with the Girl Scouts. There she was asked to volunteer as leader of local Troop 17. “I’ll stay six weeks,” she recalled telling the group.

Instead, Hesselbein stayed eight years, rapidly adding executive responsibilities and advancing into leadership that eventually carried her into the executive suites of Park Avenue.

Hesselbein climbed the ranks of the Girl Scouts, becoming CEO in 1976 and a modernizing force during a time of change for women in America.

The institute, which eventually moved to GSPIA and became the Frances Hesselbein Leadership Forum, prided itself on its mission, which Hesselbein often recited by heart and with feeling: “Building a society of healthy children, strong families, decent housing, good schools and work that dignifies.”

Drucker died in 2005, and Hesselbein continued to promote his foundation’s values through the Leader to Leader Institute.

No matter her achievement, though, the University of Pittsburgh remained a vital part of Hesselbein’s life.

She donated to the University’s Archives and Special Collections the records of her work with the Girl Scouts and materials from her Leadership Institute. The Frances Hesselbein Papers also include personal items, such as paper records, videocassettes, audiotapes, photographs and CDs that she collected throughout her career.

When Fortune magazine recognized her, it said Hesselbein was a remarkably vital leader with peak global stature who led for a long time. She responded that, “Age is irrelevant; it is what you do with your life that matters."

Over the course of her life, Hesselbein served on many nonprofit and private sector corporate boards, including Mutual of America Life Insurance Company, the Bright China Social Fund, California Institute of Advanced Management and Teachers College, Columbia University Presidents Advisory Council. She served as the chair of the National Board of Directors for Volunteers of America from 2002-2006. In 2013, Volunteers of America honored her with the Maud Ballington Booth Legacy Award for a lifetime of pioneering social change.

For her exceptional work and commitment to developing leaders of all ages, as demonstrated in her work with the Hesselbein Institute, she earned lifetime achievement awards from ATHENA International, Best Practice Institute, the Girl Scout Council of Greater New York and the International Leadership Association. She was inducted into the Enterprising Women Hall of Fame and as a Distinguished Daughter of Pennsylvania.

Hesselbein was named a senior leader at the United States Military Academy’s 2008 National Conference on Ethics in America. In 2007, she was awarded the John F. Kennedy Memorial Fellowship by Fulbright New Zealand and was the first recipient of the Dwight D. Eisenhower National Security Award in 2003.

She was the recipient of 22 honorary doctoral degrees, the co-editor of 35 books in 21 languages and the author of several books. Hesselbein traveled to 68 countries representing the United States.

She was preceded in death by her husband John Hesselbein (BUS ’35) and son.