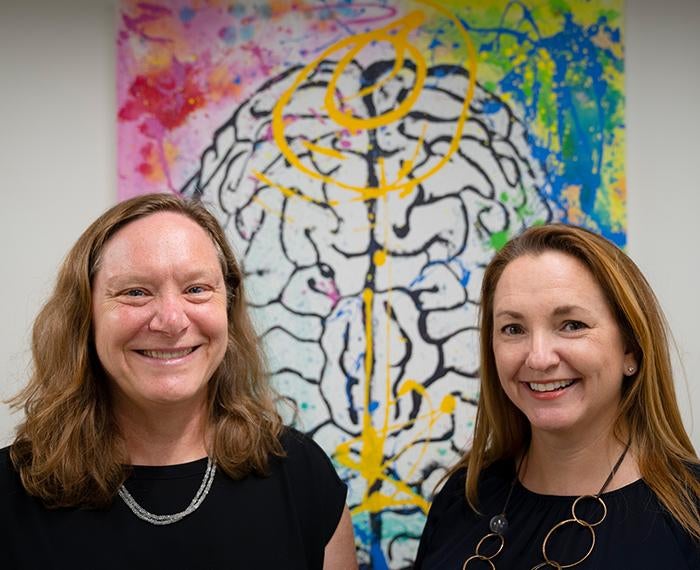 The University of Pittsburgh and Carnegie Mellon University have a long-standing partnership in the Center for the Neural Basis of Cognition (CNBC), a 28-year-old neuroscience research and education program. After a year-long reimagining process, the universities have announced that Julie Fiez of Pitt (pictured, left) and Lori Holt of Carnegie Mellon (pictured, right) will lead the neuroscience powerhouse into its next era.

The center — what they call “the world’s most exciting and neighborly playground for pioneering research and training in the neural basis of cognition” — leverages Pitt’s basic and clinical neuroscience expertise with Carnegie Mellon’s cognitive and computational neuroscience programs. It provides a way for students and faculty to connect formally and informally for graduate training, undergraduate research opportunities and “collaboration clusters,” which encourage joint publications and grant submissions from the two universities.

Fiez and Holt have worked together since 2007. The two lead the joint Pitt-Carnegie Mellon predoctoral training program in behavioral brain research, known as B2. That program, which is supported by a grant from the National Institutes of Health, has provided 50 Pitt and Carnegie Mellon students with two years of support to do research at the intersection of brain and behavior. Fiez said it is an excellent example of the way Pitt and Carnegie Mellon work together.

“Our mentors and trainees come together through co-mentorship committees and program activities to forge truly interdisciplinary connections,” she said. “This way of working, of breaking down barriers, is part of what brought me to Pittsburgh in the first place.”

Fiez is the chair of Pitt’s Department of Psychology in the Kenneth P. Dietrich School of Arts and Sciences. Her research focuses on neural systems for language and learning, and integrates behavioral, neuroimaging, neuropsychological and intracranial recording methods in typical adults and clinical populations.

Holt, a professor in Carnegie Mellon’s Neuroscience Institute and Department of Psychology, is an expert in auditory cognitive neuroscience with a focus on understanding how humans interpret the complexity of spoken language. She has been a longtime member of the center and welcomes the opportunity to strengthen existing ties.

“The proximity, collegiality and complementary expertise of the two institutions makes Pittsburgh a truly unique place to study the neural basis of cognition,” Holt said. “Both institutions place a high value on this partnership, and we are excited about what the future holds.”

Since 2021, CNBC has been led by Rob A. Rutenbar, Pitt’s senior vice chancellor for research, and Barbara Shinn-Cunningham, the George A. and Helen Dunham Cowan Professor of Auditory Neuroscience and director of Carnegie Mellon’s Neuroscience Institute. Robert K. Cunningham, vice chancellor for research infrastructure at Pitt, Stephen D. Meriney, professor and chair of neuroscience and psychiatry at Pitt, Gerry Balbier, the executive director of Carnegie Mellon’s Neuroscience Institute, and Shinn-Cunningham led the reimagining process that culminated in the new leadership.

“We went through many exercises to try to figure out what people need and want out of the center and were able to generate feedback in a bottom up, grassroots way,” Shinn-Cunningham said. “The neuroscience programs at both universities have grown substantially over the years — but everyone still recognizes how much they gain from being part of the larger, more diverse community.”

Because of the substantial growth on both sides, the center is no longer the sole intellectual home for neuroscientists in Pittsburgh. Instead, the center’s leadership views it as a curious and friendly place for research, even including a subtle nod to Pittsburgh’s own Fred Rogers in its vision statement.

Cunningham said this new vision for the center, along with a mission statement and core values, allows the center to look to the future.

“The history of the center is so important — it takes time to build an organization like this. We had an opportunity to listen to all members to both honor the past and see how they want to move forward. That’s what our new vision, mission and values set forth,” he said.

The CNBC was formed in 1994 with support from the Richard King Mellon Foundation. Funding for the center now comes from the Office of the Senior Vice Chancellor for Research at Pitt and Carnegie Mellon's Neuroscience Institute. In addition to Rutenbar and Shinn-Cunningham, previous co-directors were Robert Moore, Peter Strick and Nathan Urban from Pitt and James L. McClelland, Carl Olson, Michael J. Tarr, Marlene Behrmann and Robert E. Kass from Carnegie Mellon.