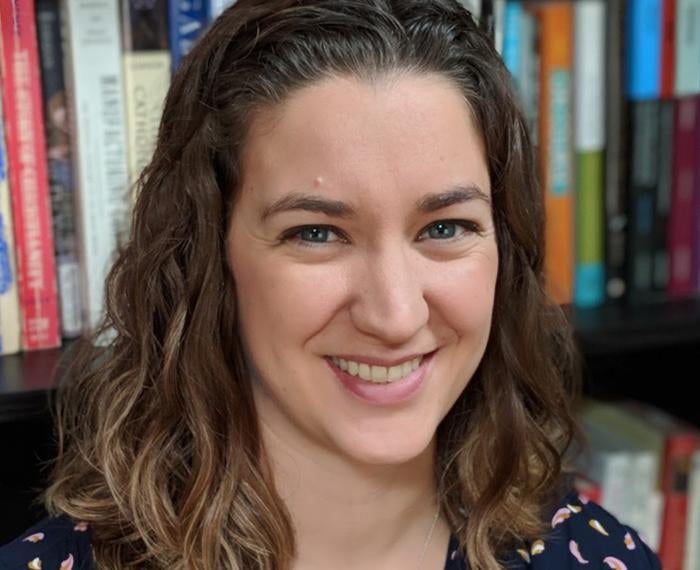 Evan Schneider, whose research focuses on the digital modeling of galaxies, has become the third faculty member at the University of Pittsburgh to be named a Packard Fellow since the award’s inception in 1988.

Schneider, an assistant professor in the Department of Physics and Astronomy in the Kenneth P. Dietrich School of the Arts and Sciences, is one of 20 early career professors nationwide to receive a Packard Fellowship for Science and Engineering, it was announced today.

Using her own code and the world’s fastest supercomputers, Schneider and fellow researchers can simulate galaxies with greater clarity than ever before.

“Evan is exactly the type of inquisitive, passionate, early career faculty member Pitt seeks to attract and nurture. I’m grateful that the Packard Foundation has recognized her creative energy and their willingness to invest in her,” Senior Vice Chancellor for Research Rob A. Rutenbar said.

The award, which comes with a $175,000 grant per year for five years, encourages innovative thinking by providing flexibility and support to young scientists and engineers.

Schneider — the University’s first Packard fellow in 25 years and the first woman at Pitt to receive the award — will use the award to add to her team of six researchers. With more teammates, she can use her upcoming work at the Oak Ridge National Lab, which has the world’s first exascale supercomputer, to complete simulations at a more efficient rate than ever before.

“It’s really just an honor to know people care about my work at all,” Schneider said. “As a post-doc, you grind away and work so hard, and a recognition like this is just a relief, because it tells me all that work was worthwhile.”

Schneider's investigations of the universe's mysteries started as a graduate student at the University of Arizona, after she completed an undergraduate degree at Bryn Mawr College.

Looking for a new project in her second year at Arizona, she met with her advisor, Brant Robertson, who now works at University of California, Santa Cruz.

Schneider recalled Robertson telling her that it would be great if someone created software capable of creating simulations on graphics processing units (GPU). She knew that tool would be groundbreaking for understanding how galaxies work — but she didn’t have experience with coding.

But Robertson told her that even though she wasn't an expert, she could learn how to do it, she said.

That’s when Schneider determined that she would never write herself off: If someone was going to create this software, why not her?

As part of her thesis at Arizona, Schneider developed Cholla (Computational Hydrodynamics on II Architectures), a GPU-based hydrodynamics code that she keeps free and open source. Cholla simulates the evolution of galaxies to better understand how they form.

Particularly, Schneider found herself interested in the process of feedback in galaxy evolution. When stars form, many explode as supernovae. This process, known as feedback, blows gas out of the galaxy. Because gas is needed to form stars, feedback can prevent the formation of new stars until gas returns. The finer details of this process are poorly understood, because it requires extremely detailed simulations to comprehend it.

But as Schneider continued to develop Cholla, it allowed for more detailed explanations of this process than any code before it.

By 2020 when Schneider began at Pitt — where she felt at “home at a large research institution that provided me with support in a city I love” — she was already making strides toward creating a way to better understand this phenomenon.

“Her code Cholla is designed to run very efficiently on the world’s largest supercomputers, and her simulations will add a level of realism to our models of galaxy evolution that has never been possible before,” physics and astronomy department chair Arthur Kosowsky said. “Evan and her students are going to redefine the state of the art in computer simulations of galaxies.”