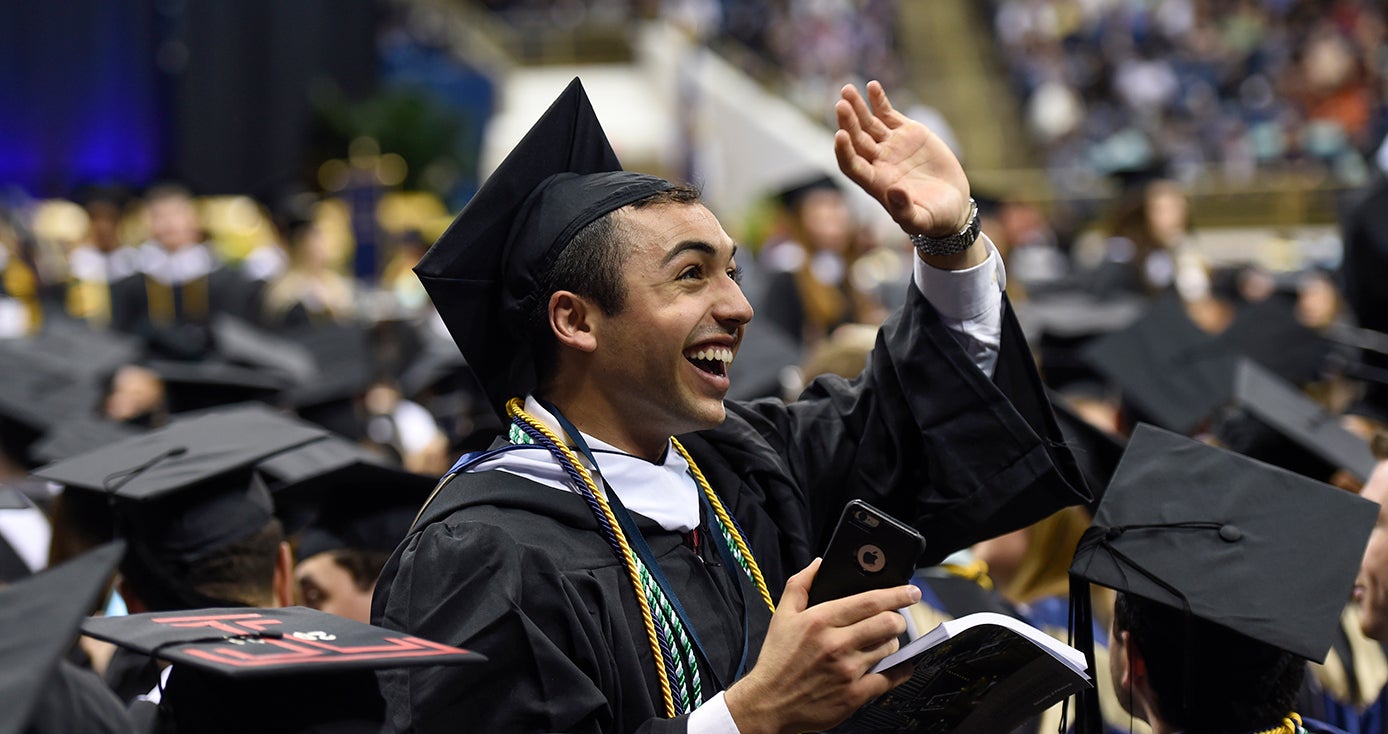 Graduation is nearly here: The culmination of academic endeavors. A celebration of well-earned achievement. Some things — pomp and circumstance — never change. Others, like recycled regalia, call for new traditions.

Each cap and gown worn by a graduate this year will be made out of fabric woven from approximately 27 recycled plastic bottles — totaling nearly 110,000 drinking vessels. They won’t look any different than conventional robes, but the class of 2018 will live out their first moments as Pitt alums already helping to carry out a commitment to sustainability.

For more details on the events, visit Pitt’s commencement website, which has all the need-to-know information and an FAQ page.

What to expect: when and where

Two separate ceremonies will take place, rain or shine, at the Petersen Events Center on upper campus. Ceremonies last between 2 and 2 1/2 hours.

No tickets are required; seating is first come, first served. It’s recommended to allot about 30 minutes for traffic coming into and out of the Oakland area.

The graduate ceremony, on Thursday, April 26, begins at 6:30 p.m. Check timing, instructions and where to line up here.

The undergraduate ceremony, on Sunday, April 29, begins at 1 p.m. Check timing, instructions and where to line up here.

Guests should enter the Petersen Events Center through the lobby-level entrance (on the corner of Terrace and Desoto streets) or through Concourse A (from Sutherland Street). There will be security at both entrances. Guests who require accessibility accommodations can find more details here.

The 2018 commencement speakers are Pitt grads themselves:

David C. Frederick (A&S ’83) will give the graduate commencement address. An appellate attorney in Washington, D.C., Frederick studied political science and was Pitt’s first-ever recipient of a Rhodes scholarship. He went on to earn a PhD at Oxford and JD at the University of Texas. He has argued many cases in front of the U.S. Supreme Court and has endowed a number of Pitt scholarships.

Pittsburgh Mayor Bill Peduto (GSPIA ’11) will address the undergraduate class of 2018. Peduto was elected to the office of Mayor of the City of Pittsburgh in the General Election on November 5, 2013, and took office as Pittsburgh’s 60th mayor in January of 2014. Prior to taking office, he worked for 19 years on Pittsburgh City Council. As a councilman, he wrote the most comprehensive package of government reform legislation in Pittsburgh’s history.

Tips for the day

Families are encouraged to bring their own cameras and check out a list of great photo-op spots in advance.

University personnel will also be curating a photo album for social media. Check out last year’s graduate and undergraduate albums to get a sneak peek. Share your favorites on social media using #PittGrad18.

Free University-owned parking lots will be open to all visitors after 4 p.m. on Thursday, April 26, for the graduate ceremony and free all day on Sunday for the undergraduate ceremony. Shuttles will run to and from select lots. See maps on website for details.

Find more travel information here for planes, trains and automobiles. Book ahead for hotel stays in the Oakland area. The Petersen Events Center is easily accessible by foot from nearby hotels, by car, bus, taxi or ride-sharing services.