Chess Ace Makes Her Next Move 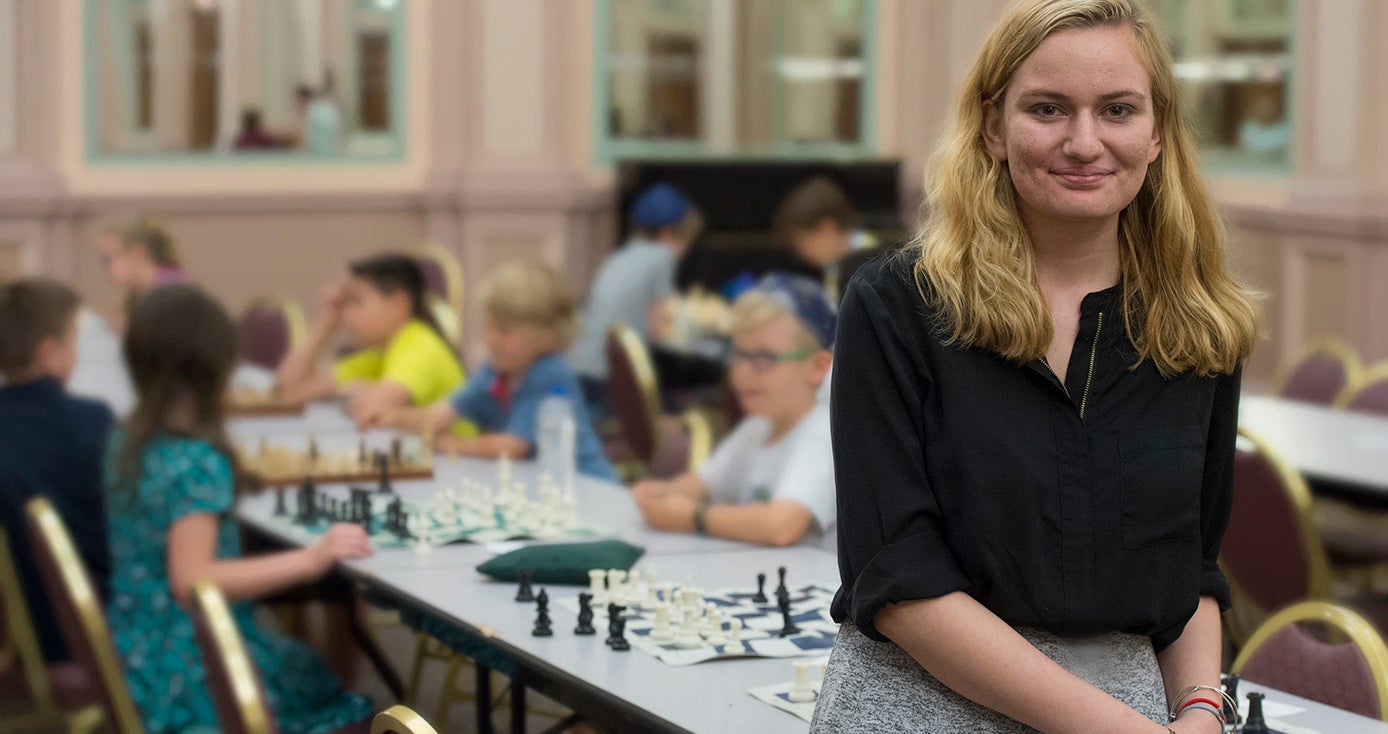 “Checkmate” is not a word that usually draws interest from preschool-age children, but for Ashley Priore, it was part of daily vocabulary.

Priore has been playing and studying chess since she was 4 years old, taking after her two older siblings.

“I had no formal instruction that I can remember,” said Priore, now 18 and starting school at the University of Pittsburgh Kenneth P. Dietrich School of Arts and Sciences this fall as an English major. “I saw my siblings play and I asked my dad if I could play because they were doing it. I was at that age when if your siblings were doing something, it must be really cool. I fell in love with it.”

While preparing for her next big step in life as an incoming Pitt Panther, the Pittsburgh resident is using her passion for chess to teach the game to the community with her nonprofit organization, The Queen’s Gambit Chess Institute.

Priore created The Queen’s Gambit in 2014 to teach chess to people of all ages and seek inclusion in a male-dominated sport. She has been teaching the game to children and adults since she was 8.

Her organization recently hosted the inaugural Pittsburgh Chess Conference, a two-day event held June 1-2 that saw about 20 Pittsburgh-area students in grades K-12 compete in a chess tournament at the William Pitt Union on the University’s campus. The tournament also provided the kids the opportunity to interact with local leaders, including Allegheny County Executive Rich Fitzgerald and Pittsburgh Councilwoman Erika Strassburger.

“We’re using chess as a way to create a better community in Pittsburgh and bridge cultural gaps,” Priore said. “People can learn about each other’s backgrounds by playing the game with each other.”

The kids were taught strategies and tactics by chess grandmaster Timur Gareyev, also known as the Blindfold King for his ability to play the game blindfolded. Gareyev, 30, was born in Tashkent, Uzbekistan, and played for the University of Texas at Brownsville’s chess team. He holds the Guinness World Record for most simultaneous blindfolded chess games with 48 total.

Priore was introduced to Gareyev through an event held by the Pittsburgh Chess Club, of which Priore is a member, and asked him about teaching the children.

“This is a phenomenal initiative,” Gareyev said about Priore’s nonprofit and the conference. “These kids are beginners trying to become intermediate-skilled players. Truly, chess is a team game. You’re a manager of a team, you learn strategy and learn to use resources. You also learn to think before you move, skills that are in every aspect of life.”

Pitt’s all about preparing students for their lives, and that’s what chess does. You prepare for your next move.

An all-female tournament at Schenley Plaza also was held as part of the event, with 50 competitors playing. The tournament created a sense of community to discuss their accomplishments in chess.

Priore chose Pitt to continue her studies because she always liked the University, with the Cathedral of Learning being within sight of her home in Shadyside. She graduated from The Ellis School in Pittsburgh, all while also being the Pennsylvania State Coordinator for the national Women’s Chess Committee and a board member of the Pittsburgh Chess Club. The U.S. Chess Federation ranks her in the top 1,500 chess players in the country.

On June 16, Priore gave a TED Talk at TEDxPittsburgh on how chess can be used for economic and political change.

“The basis of this talk is to expand how we view chess from ‘just a board game’ to a way to create positive leadership,” she said.

Along with English, Priore will take business courses at Pitt to further aid in her management of The Queen’s Gambit, which she’ll continue to operate upon entering the University. She also hopes to increase University interest in chess.

“For me, English has connected with chess,” she said. “With English, it’s all about building an argument by analyzing books. Every time you move in chess, you have to have a reason to do it. We have to prove the significance with what we write for in English and why we move certain pieces in chess.”

“Pitt’s all about preparing students for their lives, and that’s what chess does. You prepare for your next move,” said Priore. “Whether it’s through research, scholarships or extracurricular opportunities, they’re really preparing you for the real world. That’s also how I see chess.

“Chess is like a makerspace,” she added. “Players can experiment with different strategies with little to no consequences and can carry these skills into real-world situations.”