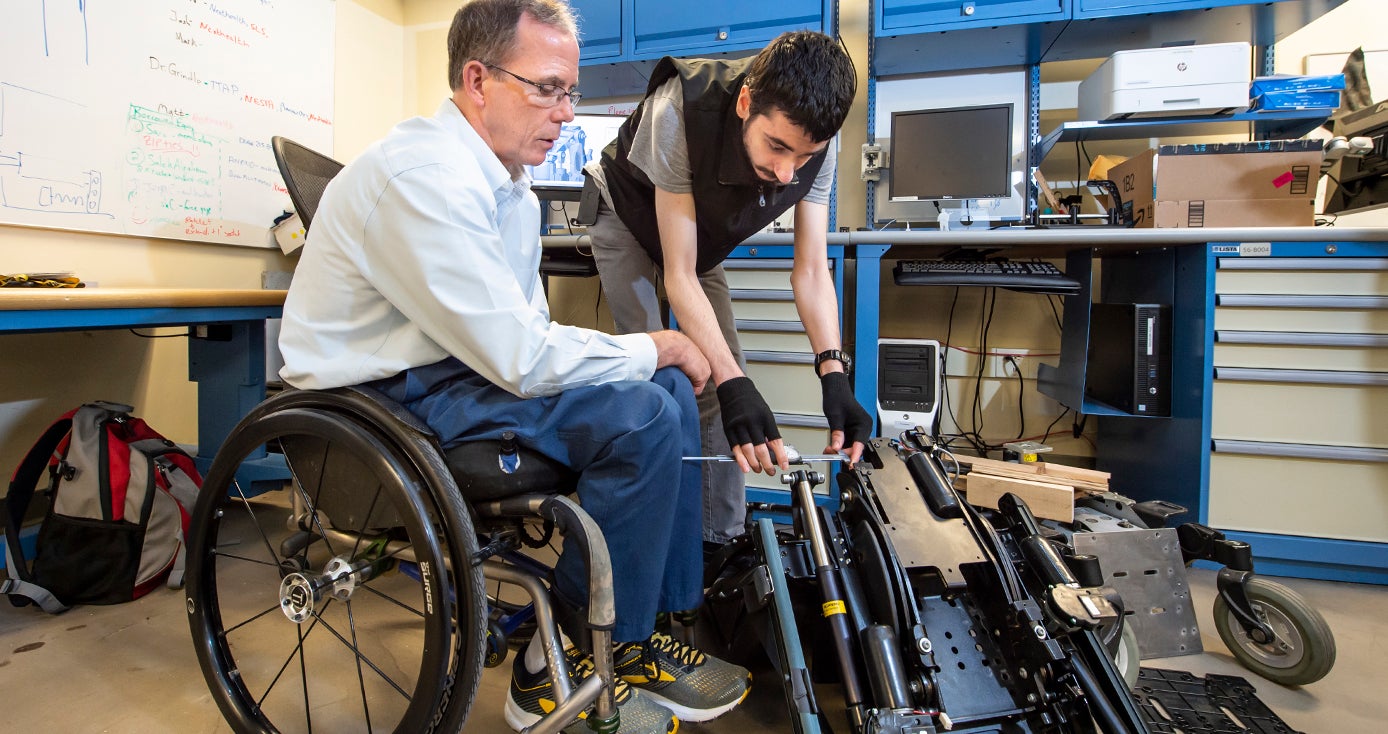 On a weekday afternoon, Rory Cooper ventures down to the basement workshop of the University of Pittsburgh’s Human Engineering Research Laboratories (HERL) to check on the progress of one of the lab’s latest projects in human mobility.

“Did you get the clearance issues worked out?” he asks student employee Josh Kanode.

“We have a good idea what we’re doing, but we’ll need to model it in a new way,” responds Kanode.

They’re revamping the design of MEBot, a wheelchair first created in HERL that allows users to traverse rough terrain more smoothly than standard wheelchairs — and climb steps and curbs. This newest iteration of MEBot will also include a robotic arm that users can guide to grab items.

This check-in is standard for Cooper. Each morning, he starts his day in the workshop and makes his rounds again in the afternoon, checking in on his team’s progress and making enhancements to his own inventions. 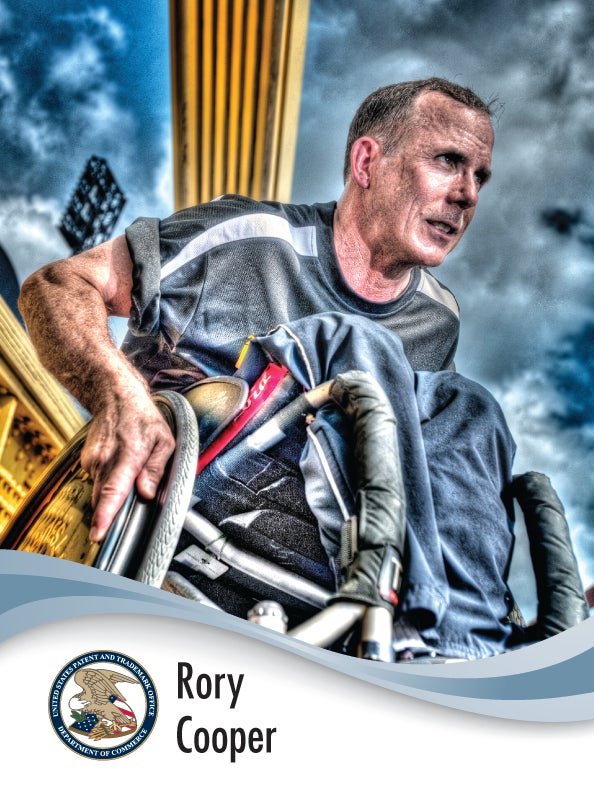 Cooper’s bioengineering efforts geared toward improved mobility have earned him international praise over his 40-year career. Most recently, his accomplishments were recognized in May, when Cooper traveled to the Smithsonian Institution’s Museum of American History in Washington, D.C., for the unveiling of his portrait and trading card from the U.S. Patent and Trademark Office. Cooper joined the likes of Thomas Edison, George Washington Carver and Hedy Lamarr, among other prolific inventors, in the Inventor Collectible Card Series. Cooper took home 250 trading cards of himself.

“I didn’t even know they made trading cards for inventors until a few months ago, and this series has been out since 2012,” he said. “I only have about 50 of my cards now, because people have been wanting them. In D.C., people asked me to sign copies of my patents.”

Back in Pittsburgh, Cooper keeps working on his vision of a society where using a wheelchair does not mean the end of independence.

Cooper has served as director of HERL since its inception in 1994 when the labs were located at the former Veterans Affairs Highland Drive campus in Pittsburgh. The labs were formed from a partnership between Pitt and the U.S. Department of Veterans Affairs to develop mobility technology to improve the lives of those affected by disabilities.

“Back then, it was just me and two graduate students, and we were in a converted broom closet,” said Cooper, who is also the associate dean for inclusion and FISA/Paralyzed Veterans of America Distinguished Professor at Pitt’s School of Health and Rehabilitation Sciences.

Twenty-five years later, HERL is located in Bakery Square in Pittsburgh's East End after moving there in 2011, and has 30 faculty and staff members and about 40 students.

“I’m very lucky we’ve put together a world-class team; we’re all committed to the mission of helping people with disabilities and older adults live full lives and contribute to society as much as they can and they like,” Cooper said.

A life of athletics and tinkering

Cooper’s knack for making everyday transportation better goes back to his youth. As a child and later a high school athlete, Cooper tinkered in his parents’ garage, improving his skateboards and bicycles using materials like plywood and fiberglass to create smoother travel on more durable vehicles.

“I grew up in California, so skateboarding was a hot trend there at the time,” he said.

In 1976, at the age of 17, Cooper enlisted in the U.S. Army and was stationed in Germany, where he met his wife, Rosemarie.

“He spoke German fluently, which struck me as him being genuinely interested in the German culture and, somehow, he won my heart,” said Rosemarie Cooper, a native of Worms, Germany.

However, it was also here where Rory Cooper’s life would take a tragic turn.

While riding his bicycle, Cooper was hit by a truck. The accident paralyzed him from the waist down, forcing him to permanently use a wheelchair, as well as ending his active military tenure. After returning to the U.S. following medical treatment and an honorable discharge, Cooper soon realized his dissatisfaction with his hospital-issued wheelchair.

“I returned to my parents’ garage and started from scratch,” he said. “I threw the old one I had away. When I was injured, the technology was pretty bad and I couldn’t really see myself using wheelchairs that heavy, poor of quality and difficult to propel.”

Using materials like steel conduit, Cooper created a more durable wheelchair with a sleeker design that also allowed for easier travel. He took this newfound interest with him to college in California and later became interested in robotics, like the technology used for MEBot.

Rosemarie soon followed Rory to California and the couple wed in 1982. Today, she is an assistant professor in the Department of Rehabilitation Science and Technology at Pitt and director of the UPMC Center for Assistive Technology. 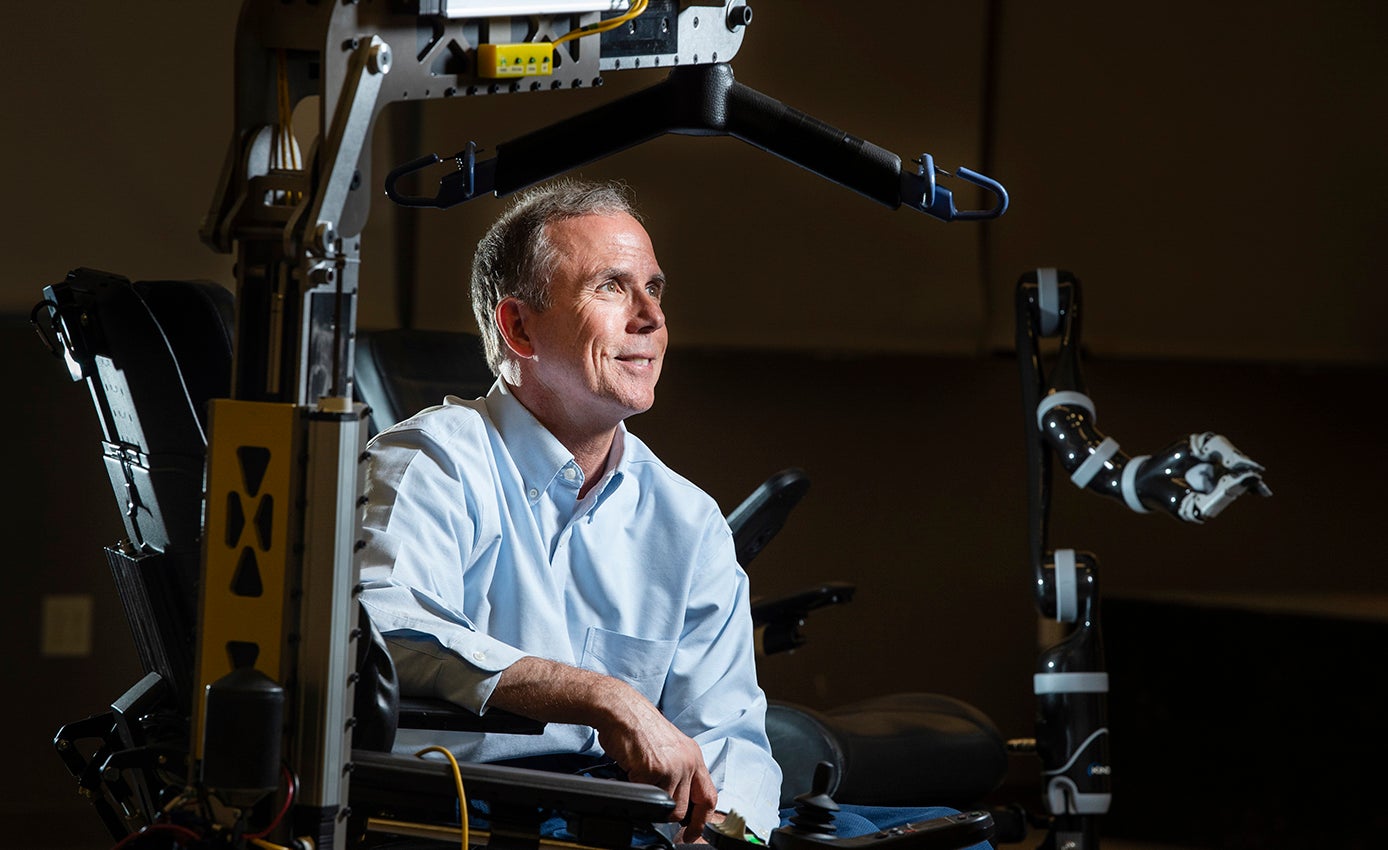 Since joining HERL, Cooper has earned nearly 25 patents. He also authored two books, “Rehabilitation Engineering Applied to Mobility and Manipulation” and “Wheelchair Selection and Configuration,” and had his likeness featured on a Cheerios box in 2009.

“I usually get pretty excited when potential patents for his projects come across my desk,” said George Coulston, technology licensing manager at Pitt’s Innovation Institute. “Rory’s work is targeted toward a community of people that needs help, and it’s fulfilling work that he does. When I first met him a few years ago and saw all the memorabilia and accolades he’s collected over the years, I thought to myself about just how many lives he’s touched.”

Cooper’s interest in sports also continues. Following the success of his first personally customized wheelchair, he fulfilled his desire of getting back into athletics by creating specialized racing wheelchairs, mostly made of aluminum, that allowed for easier propulsion.

His talents were showcased internationally as he raced his way to a bronze medal in the 4x400-meter wheelchair relay at the 1988 Paralympic Games in Seoul, Republic of Korea. To this day, Cooper competes in handcycling races, winning the Buffalo Marathon in May and finishing fifth in this year’s Pittsburgh Marathon.

Aside from MEBot, Cooper is also heading projects like StrongArm — a wheelchair attachment that allows users to transfer themselves from their chair with a remote control and a crane-like mechanism. This is useful for wheelchair users who do not have the upper body strength to do this themselves and it could eventually eliminate the need for other people to assist.

Other projects include a computer mouse specifically designed for people who use a hook-type prosthetic hand, and PneuChair, a waterproof, motorized wheelchair that runs entirely on compressed air. The prosthetic mouse debuted in April as Cooper and former Disabled American Veterans national commander Dave Riley demonstrated the specialized mouse via Facebook Live.

PneuChair meanwhile had a successful unveiling in 2017 at Morgan’s Wonderland, a theme park in San Antonio, Texas, where patrons enjoyed the water using 10 of the chairs. Since, then, PneuChair has been spun out as a startup, Atimize, and is in the AlphaLab Gear accelerator near HERL.

“It’s exciting to see. I would love to see this technology available for patients soon. Rory is usually five or 10 years ahead of his time,” said Rosemarie Cooper, who has collaborated with her husband on his many mobility improvement projects, including MEbot and StrongArm, with the Center for Assistive Technology providing clinical expertise for HERL. “I can tell my clients at the center the impact that he has had over the past 30 years with this technology. And I can get a glimpse of what the future may hold. That’s pretty exciting for any spouse or family member to see.”

Rory Cooper credits his team for the lab’s advancements over the years, but even as his technology moves along, Cooper doesn’t plan to stop anytime soon.

“The researchers in the laboratories pour their time and effort into technologies that aim to improve people’s lives who need it most,” Cooper said. “It truly is amazing to see just how far mobility technology has come over the past century. But we’re not done.”