On campus, a different kind of housing is going up: new apartment homes designed to attract some tiny but important residents.

They’re the work of Bee Friendly Pitt, a team of undergraduates that has installed seven bee houses near plantings and pollinator gardens throughout the Pittsburgh campus. Bee Friendly Pitt was conceived during the spring term as part of environmental studies program instructor Ward Allebach’s sustainability course, which focuses on developing impactful sustainability projects on campus and in the community.

In planning the locations, the team drew upon expertise from the lab of Tia-Lynn Ashman, a distinguished professor in Pitt’s Department of Biological Sciences whose work includes research on pollinators.

First established in 2007 by Congressional resolution, Pollinator Week has become an international celebration of bees, butterflies and other pollinators in recognition of their crucial role in agriculture and healthy ecosystems.

Pollinator Week was initiated and is managed by the nonprofit Pollinator Partnership, which promotes the health of pollinators through conservation, education and research.

In line with Pitt’s Sustainability Plan, Bee Friendly Pitt aims not only to protect and support solitary bees, but to raise awareness about these important native pollinators.

“We want to increase the habitat for bees, to make it easier for them to reproduce and find safer environments,” said teammate Matthew Golub, a rising junior from Horsham, Pennsylvania, who aspires to become an entomologist.

Solitary bees, such as sweat bees, mining bees and leafcutter bees, tend to fly under the radar. They don’t live in hives or produce honey, yet because they’re indigenous, they’re exponentially more effective at pollination than honeybees, which are native to Europe.

“There’s a huge stigma about bees. These bees are very docile, very safe, so if you mind your business, they mind theirs,” he said.

“They’re not aggressive, they don’t swarm. They don’t have a queen or a hive, so they’re less territorial,” added teammate Sarah Hart, an environmental studies major from Delaware County, Pennsylvania, who grew up with beehives in her backyard.

The houses are wooden boxes set atop posts 5 to 6 feet tall, filled with cardboard and bamboo tubes that provide a protected spot for solitary bees to lay their eggs. Signage will be added near the bee houses to educate passersby about the importance of protecting these very effective pollinators.

“There’s not a lot of emphasis on native bees,” even though they’re busier and more effective pollinators than honeybees, said Avery Russell, a postdoc in the Ashman lab.

About 300 species of bees are found in Pennsylvania and, of those, about 90 percent are solitary bees, said Russell, who will establish his own lab as a biology faculty member at Missouri State this fall. 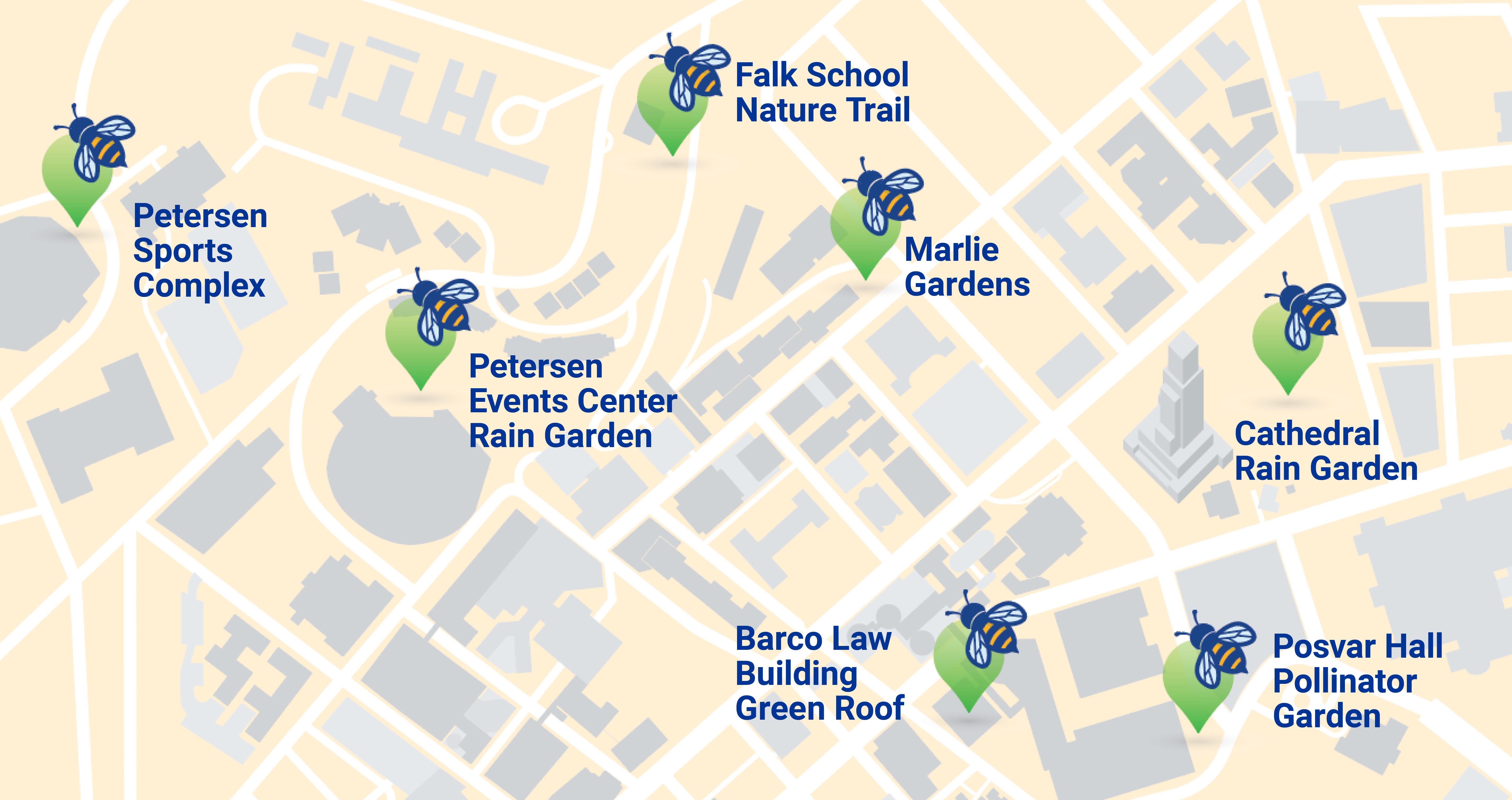 Apples, cherries and berries rely on bees for pollination, and some crops such as alfalfa, blueberries and cranberries are pollinated almost exclusively by native bees, he said.

These bees seek out hollow or dried stems in which to lay their eggs. The female bee seals her eggs in individual cells that are provisioned with a “packed lunch” of pollen and nectar that will feed the offspring.

“Solitary bees like a messy garden, but most people tend not to,” he said. Bee houses are an agreeable alternative.

Many ornamental plants — lilies, hyacinths, daffodils and begonias, for instance — are attractive but are not a source of nectar. “They look great, but they’re useless to pollinators,” he said. Native plants are a better option.

The bee houses move Pitt toward certification through Bee Campus USA, a nationwide effort committed to creating sustainable pollinator habitats on college campuses. “We would be a pollinator-friendly campus, which is a challenge in our urban location,” Golub said.

Bee Friendly Pitt is preparing a handbook to ensure the project is sustainable for years to come. Pitt’s Students for Sustainability environmental organization will replace the tubes as needed and ensure the houses are kept clean and well maintained for future generations of bees.

The team hopes that the presence of the bee homes will encourage individuals to install similar shelters in their own backyards.

“You can do this yourself,” said Hart. “They’re not hard to make and install.”