Pitt alumnus Tristan Wimmer (BUS ’20G) is spending this Veterans Day in the Utah desert where he will assist a fellow Marine with whom he served in Iraq in making 22 BASE jumps from Looking Glass Arch near Monticello, Utah.

It’s a thrilling feat, parachuting with a purpose, all to raise awareness of the issue of traumatic brain injury (TBI) and its connection to veterans’ suicides. 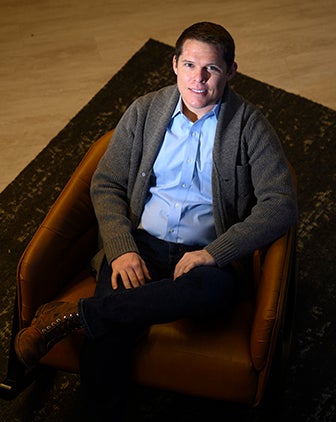 The number 22 is significant: It symbolizes the estimated 22 veterans suicides per day.

“A friend from my old U.S. Marine Corps battalion committed suicide recently and we are doing 22 BASE jumps for him and the others from my battalion who have also committed suicide over the years,” said Wimmer, who deployed to Iraq and served as an infantryman and sniper team leader.

“TBIs affected my unit disproportionately,” Wimmer said. “There were a lot of suicides, emotional management issues, PTSD, TBIs,” he said. “The effects of these deployments linger afterward. Nobody escapes it. Everyone’s affected in some way.”

He can count more than a dozen personal friends lost to suicide in addition to numerous other acquaintances who have taken their lives.

Most crushing was the death of his younger brother.

Kiernan Wimmer, a Marine Corps Special Operations raider and recon veteran, died by suicide in 2015, years after suffering a TBI while deployed.

“It was devastating to lose my brother. We were inseparable as kids. We did everything together,” he said. “My brother was injured in Iraq and suffered head trauma. It diminished his quality of life,” Wimmer said, adding that the injury affected his brother’s personality.

“He turned dark and mercurial; at times violent,” Wimmer said. The stigma surrounding the nature of his illness affected his ability to reach out for help.

“My brother was struggling with a very bad injury. He refused to admit he had a problem and tried to cover it up with a tough-guy Marine Corps attitude. He didn’t give himself a fighting chance,” he said.

On Veterans Day, Nov. 11, the nation honors the military veterans who have made sacrifices that many will never know in service to our nation.

Pitt’s Office of Veterans Services is inviting members of the University community to show their support for student veterans this Nov. 11 with an $11 donation to the Wounded Warriors and Veterans Education Assistance Fund. Donors will receive a Pitt Vets pennant.

This scholarship, one of several scholarships available to Pitt military-affiliated students, is awarded to a Pitt student veteran, particularly those who were wounded during their service.

The loss left Wimmer with struggles of his own.

“I fully ignored it for 18 months,” he admitted. “I wasn’t really dealing with my issues.” In addition to feeling intense sadness, “I was really angry at him for putting the family through this,” he said.

When he came to Pittsburgh in 2018 for his MBA, “It was tough. I was crying daily. Everything was distracting me. I wasn’t dealing with losing my best friend, my brother,” he said.

He began putting in the work to be at peace.

Rock climbing and BASE jumping—sports he had enjoyed with his brother —buoyed his spirits amid the sadness. Transition assistance from the Veterans Administration and support from his fiancée, friends and family helped him through, he said.

“Only in the past 18 months have I been able to confidently talk about it without getting emotional,” he said.

He began searching for a way to honor his brother’s memory—and to raise awareness of the injury that stole his health and his life.

“I considered doing a march or a 5k run to raise funding, but there are so many out there,” Wimmer said. “They’re worthwhile endeavors, but I wanted to generate some actual buzz.”

He received a call from Adam Krum in Moab, Utah, just before last year's Veterans Day, asking if he would make 22 jumps for veteran suicide awareness, which sparked the idea for an extreme fundraiser in Kiernan's memory, who ignited Tristan's love for BASE jumping.

In February, with assistance from Krum and about a dozen others, Wimmer BASE jumped 22 times from Camelback Mountain in Phoenix Arizona in a single day to raise funds for Cohen Veterans Bioscience, a New York-based nonprofit that researches the connection between TBIs and suicide.

The daylong event brought TV crews and other media, and connected him with a broader network of people with their own connections to the issue of TBIs and veterans’ suicides. “Lots of people reached out,” he said. He surpassed his goal of raising $2,200, raising nearly $17,000.

“The response was overwhelming. There was such broad support across the country and in the community. It was humbling. I’m grateful that people cared; grateful that people do care,” he said, adding that “being the center of attention is something I’ve never been comfortable with.”

Wimmer graduated this spring with an MBA in finance from Pitt’s Joseph M. Katz Graduate School of Business, got married in May and has launched a new career with the United Services Automobile Association in Texas. Still, he has no plans to end his high-profile advocacy for this critical veterans’ health issue.

Wimmer plans an additional BASE jump fundraiser in late January 2021. A new website focused on his efforts, 22jumps.org, will launch later this month, he said.

“I’m not a researcher or a doctor, but I have a story. If it helps somebody, it’s worth it.”

Veterans from the University of Pittsburgh community are among the featured storytellers in an online Veterans Story Night hosted by Pittsburgh Public Theater. The event is set for 7 p.m. on Nov. 12. Register to watch.