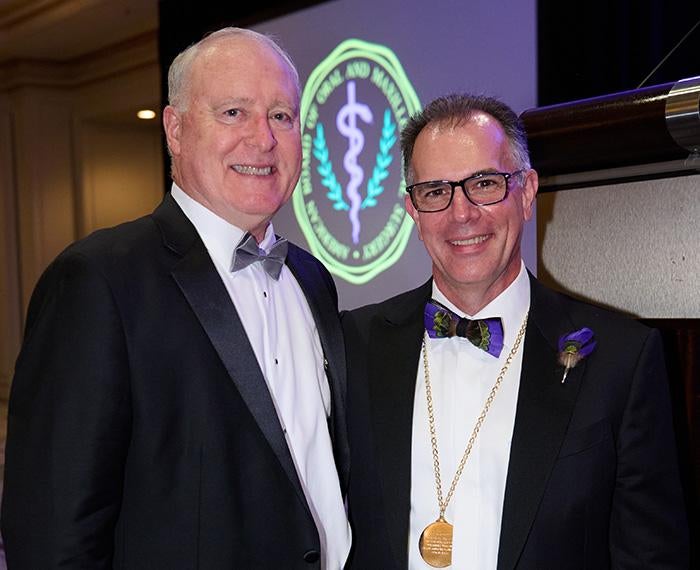 Bernard J. Costello (pictured, right), former dean of Pitt Dental Medicine and current associate vice chancellor for health science integration at Pitt, was recently named president of the American Board of Oral and Maxillofacial Surgery (ABOMS). He will serve a one-year term at the helm of the board that certifies surgeons for the specialty of oral and maxillofacial surgery in the U.S. Overseen by an eight-member board of directors, the mission of ABOMS is to ensure that face, mouth and jaw surgeons meet the highest standards of training, education and professionalism in the field through a certification process. Following a term serving as vice president of ABOMS from 2021-2022, Costello described the nomination as “a career pinnacle.” Costello is also professor and chief of pediatric oral and maxillofacial surgery at UPMC Children’s Hospital.

At the same October meeting in New Orleans, Paul J. Schwartz (pictured, left), was named president of the the American Association of Oral and Maxillofacial Surgeons (AAOMS), a century-old professional organization. Schwartz is an assistant professor in School of Dental Medicine’s departments of anesthesiology and of oral and maxillofacial surgery. According to the historians at AAOMS and ABOMS, the organizations have never had presidents from the same institution at the same time before. These nominations support Pitt’s excellence in oral and maxillofacial surgery.