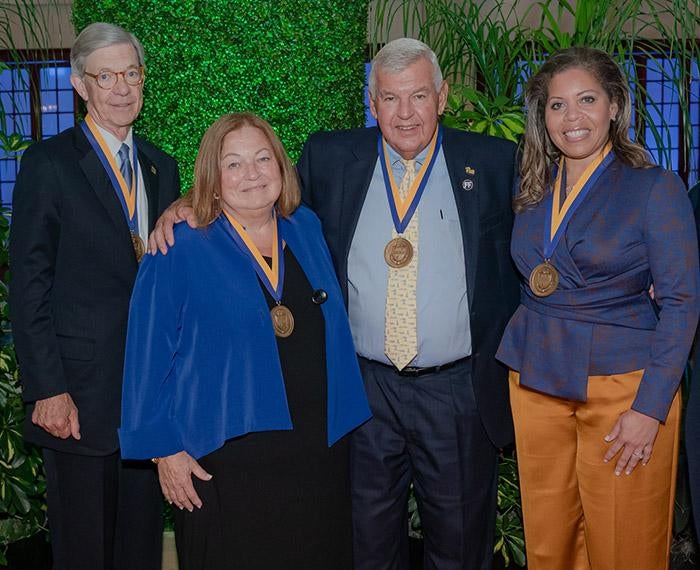 During a June 22 ceremony, the University of Pittsburgh celebrated five new Distinguished Alumni Fellows for 2020 and 2021. The honor recognizes those who have excelled personally and professionally and exhibited outstanding service to the University.

“The Distinguished Alumni Fellow award is the highest honor the University can bestow on our alumni,” said Chancellor Patrick Gallagher. “The accomplishments of these individuals and their commitment to the University are exemplary of what Pitt offers the world.”

“Celebrating the accomplishments of five distinguished alumni all at once brings an amazing energy to this year’s event,” said Nancy Merritt, vice chancellor of alumni relations. “These men and women truly show our students the potential within each of them.”

A gallery of images from the event can be found online. Pictured above from left are: Michael Bryson, Georgia Smith, Jack Smith and Sundaa Bridgett-Jones. David Frederick could not attend.

Sundaa Bridgett-Jones (GSPIA ’95) is the chief partnerships and advocacy officer, global energy alliance for people and planet at The Rockefeller Foundation, one of the oldest philanthropic institutions in the United States. Throughout her career, she has ushered in social change as a representative of the U.S. government’s United Nations delegation in South Africa, Kazakhstan and Iraq, and has helped stand up multi-million-dollar investments to improve livelihoods in the U.S. and more than 45 nations in Africa and Asia.

Bridgett-Jones is a member of the University of Pittsburgh Board of Trustees and supports the Graduate School of Public and International Affairs’ Annual Giving and Dean’s Funds, which support all manner of needs in the school.

David Frederick (A&S ’83) is the first Rhodes Scholar from the University of Pittsburgh and has gone on to an illustrious career.

Frederick is a partner with Kellogg, Hansen, Todd, Figel & Frederick PLLC in Washington, D.C. He represents clients across a broad spectrum arguing more than 100 appeals — including 55 before the Supreme Court and in every U.S. Court of Appeals. On behalf of his clients, he has successfully taken on corporations and entities as large as Apple, Tyson Foods and the NFL.

He created the Frederick Fund, which supports student scholarships as well as summer public service internships for undergraduate students in the Honors College. He also endowed the William Stanton Award Fund named in honor of the retired history professor.

Frederick was elected to the Board of Trustees June 24, 2022.

Michael Bryson (A&S ’68) retired in 2008 as executive vice president from Bank of New York Mellon Corporation and CFO of the Mellon Financial Corporation, where he served prior to the bank’s merger. As a University of Pittsburgh Ttustee and member of the Pitt Alumni Association and Kenneth P. Dietrich School of Arts and Sciences’ Board of Visitors, Bryson has dedicated countless hours to advancing the University’s mission and encouraging other alumni to do the same.

He created The Allan McLeod Bryson Merit Scholarship to support Dietrich School students in the Honors College who major in mathematics or the physical sciences. The scholarship is named in honor of Bryson’s father, the late Allan McLeod Bryson (ENGR 1926, A&S 1931G), a longtime Pitt math faculty member. Michael Bryson and his wife also established the Michael A. and Kathryn F. Bryson Undergraduate Research Fund in the Office of Undergraduate Research in the School of Arts and Sciences.

Jack (A&S ’69, MED ’73) and Georgia Smith (A&S ’70) are nearly as proud of their hometown of Greensburg, Pennsylvania, as they are of the degrees they earned from the University of Pittsburgh. Dr. Smith spent his entire career in his hometown, first in private practice, and later as chair of the Department of Orthopedics at Excela Health Orthopedics & Sports Medicine. The Smiths have long been active on both the Pittsburgh and Greensburg campuses, taking on a variety of leadership roles including the University of Pittsburgh-Greensburg Advisory Board.