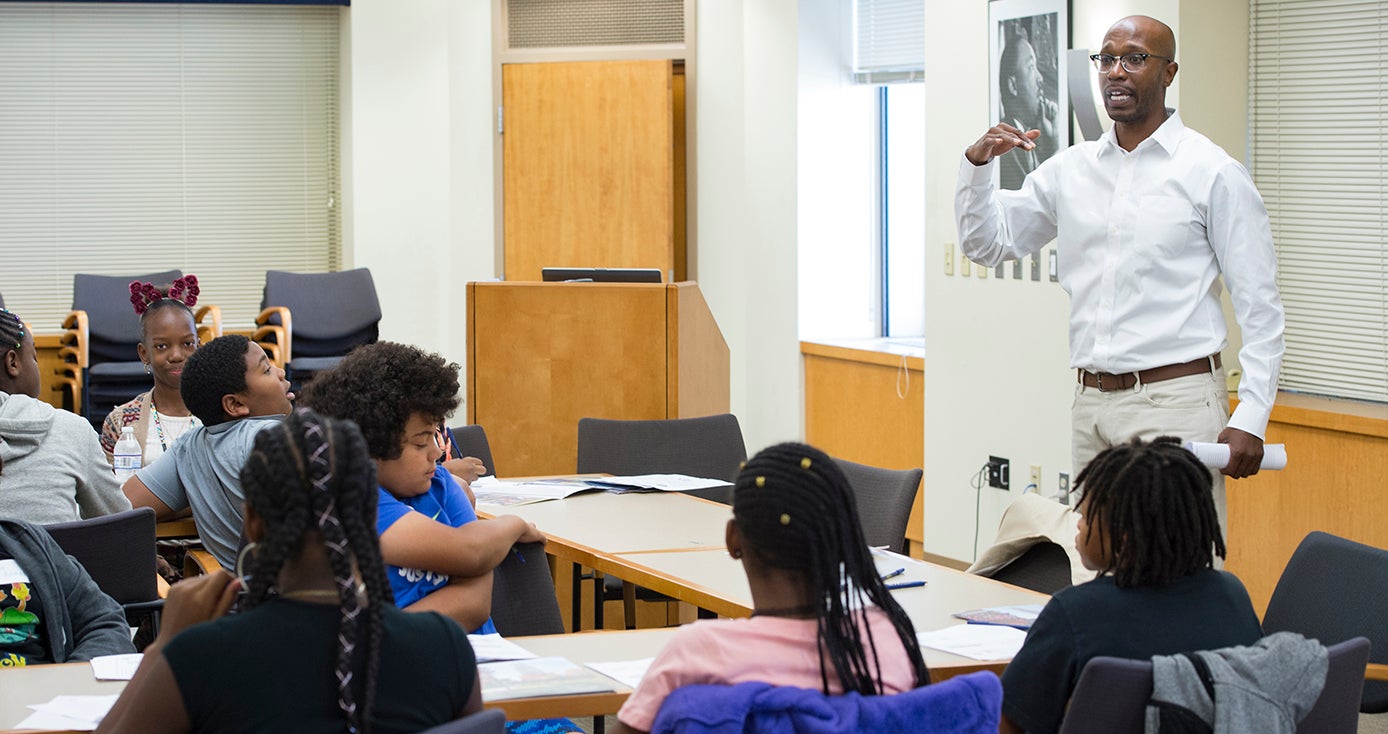 Pitt’s School of Social Work is training a new crop of fifth- and sixth-graders to become leaders in their school by helping their peers to resolve conflicts.

Pitt staff social worker Shawn Thomas, based at the Woodland Hills Intermediate in the east end of Pittsburgh, recently worked with students from that school who were assembled on the 20th floor of the Cathedral of Learning. 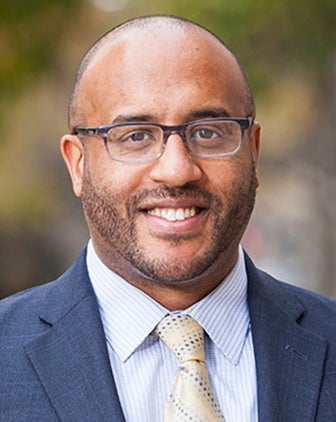 “You have to listen to the other person. And watch your body language. Don’t use a lot of your crazy hand gestures,” he said, mimicking kid-centric gestures as he spoke.

That brought giggles from the students, who were visiting Pitt’s School of Social Work for their initial training as part of Just Discipline. This project was created by Pitt Assistant Professor of Social Work James Huguley and funded by The Heinz Endowments. The students are learning to be leaders and mediators to help solve problems, mostly involving other students their age. This concept of recruiting and training young leaders with a full-time in-school coordinator was designed by Thomas and is a first for the School of Social Work and this region. According to Huguley, the approach has worked in cities like New York, Houston and Oakland, California.

Fifteen homeroom teachers recommended several students each for the project. Thomas selected the applicants he thought were the best fit and assigned them three essay questions, with answers due in two days. From there, Thomas further whittled the list through interviews. The cohort of 34 young people was formed. 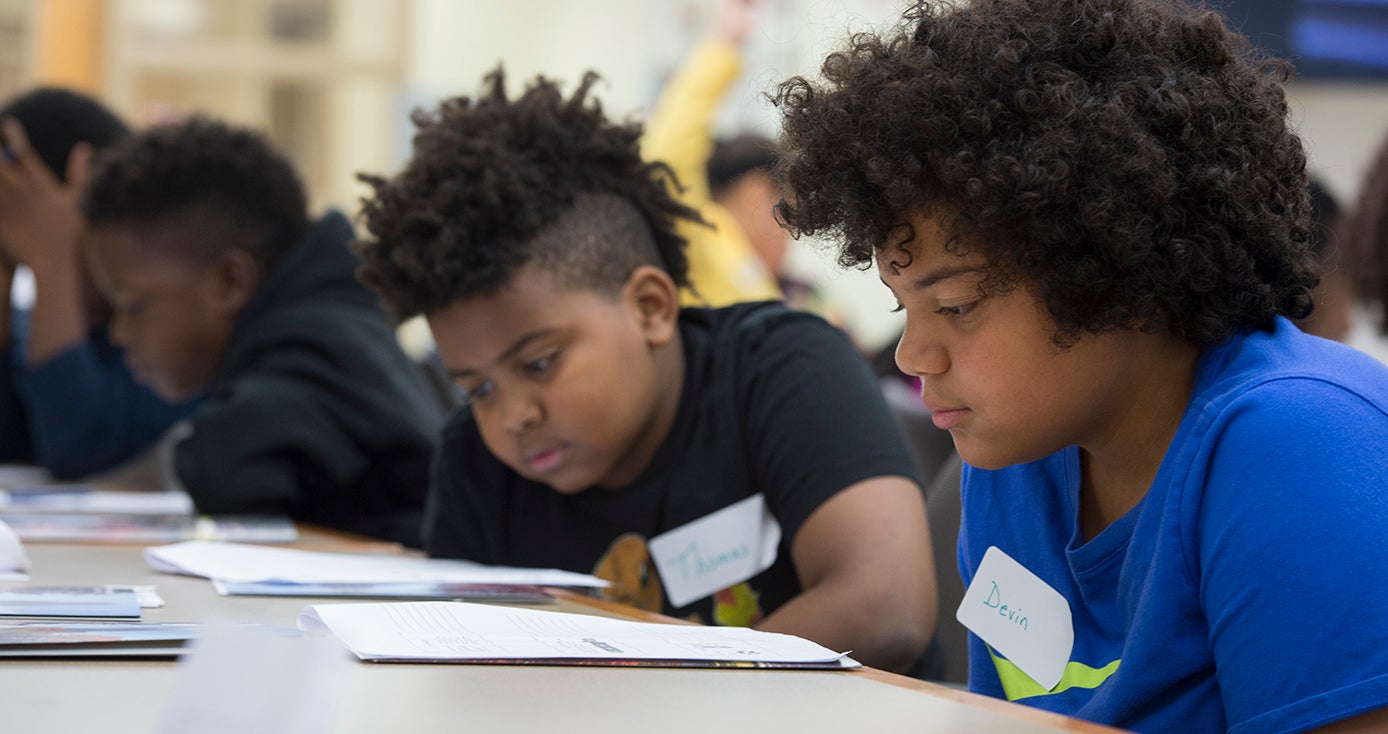 The project’s goal is to reduce students’ suspensions from school. Huguley says in Allegheny County, more than 80 percent of school districts have high suspension rates, racial disparities in suspension rates or both. And, he said, Black students are being suspended at more than five times the rate of other students.

In the School of Social Work forum room, the students listened closely to Thomas as he walked them through the steps of what will be expected of them. As student leaders, they will help facilitate “talking circles,” where students or other individuals sit in a circle and talk through a problem to find a solution that isn’t punishment oriented. Social workers call it restorative practice.

“It allows participants the freedom to express themselves and then conclude with a compromise or a solution,” said Thomas, adding that such circles are also used by many Native American tribes.

According to Thomas, there is a wide array of issues that the new student leaders can help with — many of them stemming from student gossip that can escalate to verbal and physical threats. Fights outside of school premises only involve a student leader if the dispute spills back over into the school. 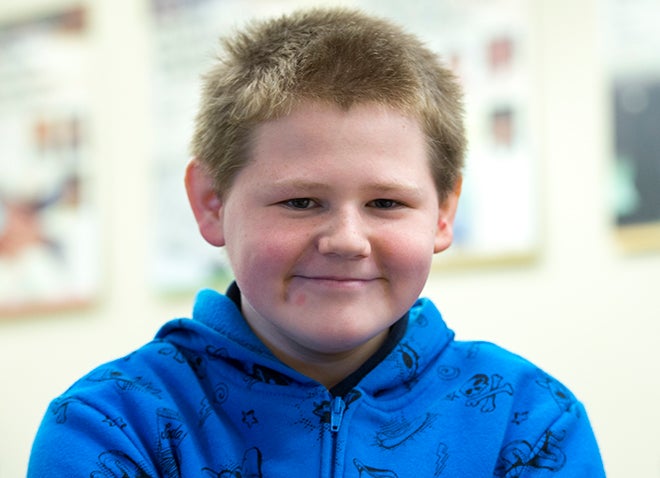 “I hear what their problem is and I help them figure it out,” he said matter-of-factly.

“Sometimes they just have to sit down and take a breather.”

Fifth-grader Zhaizaunie Knight said that she sees bullying and fights at her school but that the training session “is fun for me because I get to learn how to be kind and how to help people.”

Thomas says fifth and sixth grade is the perfect time to groom a young leader.

“We’re looking for students who exhibit charisma, respect and who have a vision,” he said. “They show a natural ability to lead without being prompted by an adult.”

Huguley adds that sixth-graders simply understand their peers in a way an adult cannot.

“They are the ones talking informally with everyone on the bus, in the bathrooms and in the hallways. They are in spaces where adults cannot be, and as leaders they can work on school cultural change in a grassroots way that is only available at the student level,” he said.

The kickoff training took place in the Cathedral of Learning to expose the children to a college environment, but the rest of the sessions occur weekly at Woodland Hills Intermediate. A Pitt social work student assists with groups of five to seven youngsters at a time.

At the training, the students are ready for a lunch break and line up excitedly as platters of sandwiches, bowls of pasta salad and beverages are brought into the room.

“I feel confident this group will have an impact on the school,” said Thomas. “We’re just fine-tuning their natural skills.”