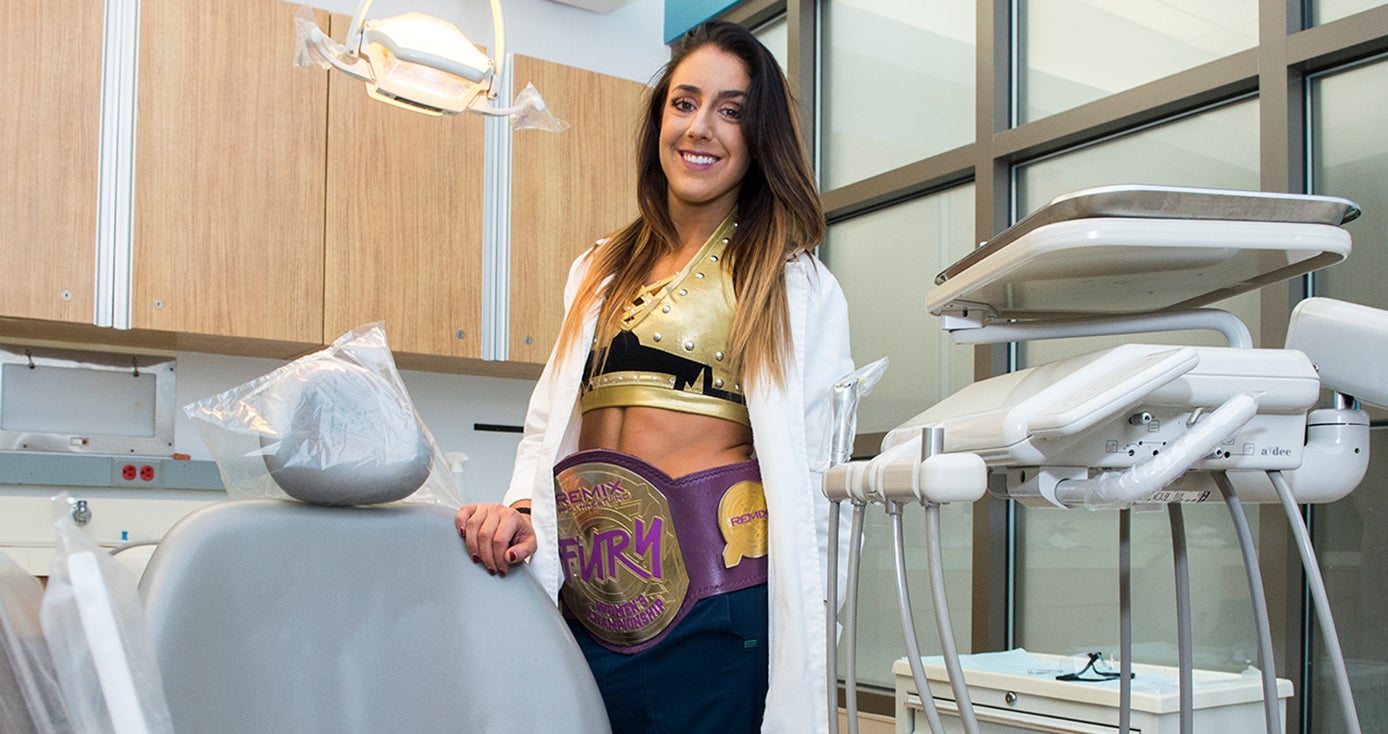 The fighter had taken a hit to the face during Shimmer, a top women’s wrestling competition in Chicago, and no one in the locker room could assess the damage, Baker said.

Fortunately for Baszler, Baker, a fourth-year student in the University of Pittsburgh’s School of Dental Medicine, was invited to the locker room to help. Baker saw the problem — a cracked tooth with pulpal exposure, which can split if not treated immediately with a root canal.

“We got her to an emergency dentist the next morning,” Baker said.

It's a story wrestling fans may have heard before — she's also described the incident for the professional wrestling podcast "Kick Out at Two."

That Baker was in the audience that day was lucky — but not entirely coincidental. When not in scrubs at the clinic, Baker is never far from the ring — she moonlights as a professional wrestler in Pittsburgh’s independent circuit, the International Wrestling Cartel.

Baker has spent the past four years juggling textbooks, clinical responsibilities, scrubbing in for surgeries and taking dental school exams — she even took one final with a black eye. Simultaneously, she's been learning about ring psychology, safety, strategy and developing her wrestling persona.

As a student, “you really have to be a good time manager” to pull off what Baker does, said Edward Adlesic (DMD ’80), assistant professor of oral and maxillofacial surgery. To keep her smile intact, Adlesic and others in the dental school have offered to customize a #Brittsburgh-embossed mouth guard, playing off her in-ring slogan. They were only partially joking, Baker said.

The growing wrestling fan base in Pittsburgh has coincided with a larger pop-cultural resurgence of the sport in recent years. That popularity is part of what Anthony Bourdain tapped into while visiting Pittsburgh in June, when the chef, author and host of CNN’s Emmy Award-winning travel show, “Anthony Bourdain: Parts Unknown,” filmed an episode that will air on Sunday, Oct. 22 at 9 p.m. on CNN.

Baker, for her part, had never seen his show. “If I ever have time for TV, it’s usually wrestling,” she said.

But in the episode, Bourdain and Baker talked under retro red lighting at Kelly’s Bar and Lounge in East Liberty. He had seen her wrestle earlier that weekend and was curious to learn more about her life, Pittsburgh subcultures and being a full-time student with a full-time job.

While on the road nearly every weekend during the first two years of school, other wrestlers quizzed Baker with dental anatomy notecards. Back at Pitt, Baker said her roommate and fellow fourth-year dental student Audrey Eichenlaub made sure she got up in time for class on one or two occasions.

Although she never had exposure to the wrestling world before living with Baker, Eichenlaub now follows storylines, rooting for this “baby face” or that “heel.” She's drawn to the theatrics, like a dance: “I know a lot of people think wrestling is scripted, but now that I’ve learned more, I think of it more like improv,” Eichenlaub said. "You never really know what’s going to happen."

Baker credits her communities, both academic and athletic, with keeping her going.

“Dental school is competitive,” she said. “No one has to help each other, but the fact that they did, just knowing I was in a jam? We have really great people here.”