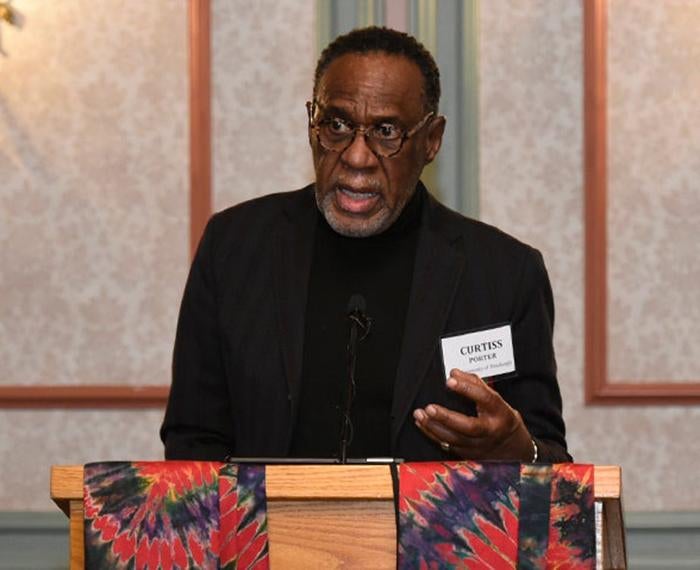 The events of Jan. 15, 1969, became a tipping point in the University of Pittsburgh’s history regarding issues of race, inclusion and representation.

On that day, students from the Black Action Society (BAS) — an organization established on April 4, 1968, in response to the assassination of Martin Luther King Jr. — led a sit-in at the University’s Computer Center to demand change and action.

On the 50th anniversary of that event, the University, Pitt’s African American Alumni Council (AAAC), and many of the original participants in the protest came together to commemorate the moment.

The event included a candlelight procession recreating the march from the student union to the Cathedral the night of the sit-in and a ceremony passing the mantle of leadership from one generation to the next.

At the event, Curtiss Porter, a BAS founder, and others reflected on how the sit-in came to be. He explained that the students joined together after the King assassination to seek profound progressive change on campus. At the time, he said, Black students were enrolled in small numbers on campus. They often felt unheard. They lacked Black faculty mentors, and courses, both required and elective, largely ignored their culture and history.

The BAS ignited a series of events that would make it a vibrant and active campus group, and one that’s played an instrumental role in connecting Pitt to its Black students and to the larger African-American community in the city of Pittsburgh.

The spark began on Jan. 15, 1969, King’s birthday. BAS members, weary of what they considered a slow response to three key demands — the recruitment of more Black students, faculty and staff, the creation of more Black-centered campus programming, and the establishment of a Black Studies Department — took action.

“We were influenced by both the philosophies of Dr. King and Black Power advocate Stokely Carmichael,” said Porter. “We wanted change and knew that it was time to organize and take direct action.”

That action included dozens of African-American students peacefully locking themselves in the Computer Center in the Cathedral of Learning. Before the sun rose, through tense but cordial negotiations, University administrators led by Chancellor Wesley Posvar agreed to immediately implement the students’ three key demands, among others.

Porter, a retired chancellor of the Penn State Greater Allegheny campus and a former executive in city government, was instrumental in planning the takeover. He often says the sit-in was “a moment when the human spirit rose above circumstance.”

At last month’s commemoration, many of the sit-in participants recalled how, in an age of disruptive social and political change, the nonviolent action of the BAS was transformative. According to Porter, it opened the doors for greater recognition of the Black experience at Pitt and continues to signify the importance of diversity and inclusion as a value that propels positive progress for all.

Oral histories and reflections on the takeover and the early years of the BAS will be published in September in the book, “Say It Loud.” The book will be a collection of essays from former BAS participants in the historic takeover and transformation at Pitt.

In the days following the commemoration, Provost Ann Cudd wrote in a statement to the University community that: “On the 50th anniversary of that brave action, we may confidently state that we have made significant progress — but there is so much more to do to improve the diversity and inclusiveness of our campus community. As we commemorate this local event and the 90th birthday of Dr. Martin Luther King, Jr., we should reflect on our role in securing justice and equal opportunity.”

That spirit of overcoming created an historic legacy of achievement and accomplishment for Black students, faculty and staff at the University that continues.

Today, African-American professors at Pitt continue to attract national and international distinction. A Department of Africana Studies (formerly Black Studies) offers a range of academic and community work on the Black experience worldwide. Pioneering faculty hires include the U.S. Steel Dean of the Swanson School of Engineering James Martin II and the Renee and Richard Goldman Dean of the School of Education Valerie Kinloch, the first Black deans of their respective schools.

Thousands of Black students apply to attend the University and, each year, many enroll as undergraduate or graduate students. Among these students, some have earned top academic honors, including winning prestigious Truman, Goldwater, Marshall and Rhodes scholarships — Black alumni members have been recipients of both the MacArthur genius award and a Nobel Prize.

The University’s African-American alumni network of more than 20,000 graduates is an accomplished and vital contributor to Pitt’s ongoing story — and to achievements locally, nationally and globally. The AAAC has raised millions of dollars for scholarships and other programming to support students and campus life.

In October 2018, Chancellor Patrick Gallagher spoke at the AAAC Homecoming banquet, “Blue, Gold and Black: Fifty Years of Pride, Progress and Partnership,” which celebrated the efforts and the beginning of the BAS.

He said the BAS was a “seed that was planted 50 years ago … it has deeper roots and has ushered in real change.”

Edenis Augustin, a junior psychology major, is the current BAS president. For the past year, he’s been in collaboration with the Pitt alumni from 50 years ago.

“Being in conversation and programming with early BAS members has shown me that the struggle against racism is not an old thing,” he said. It is still around. It was not that long ago. There is still work we need to do.”