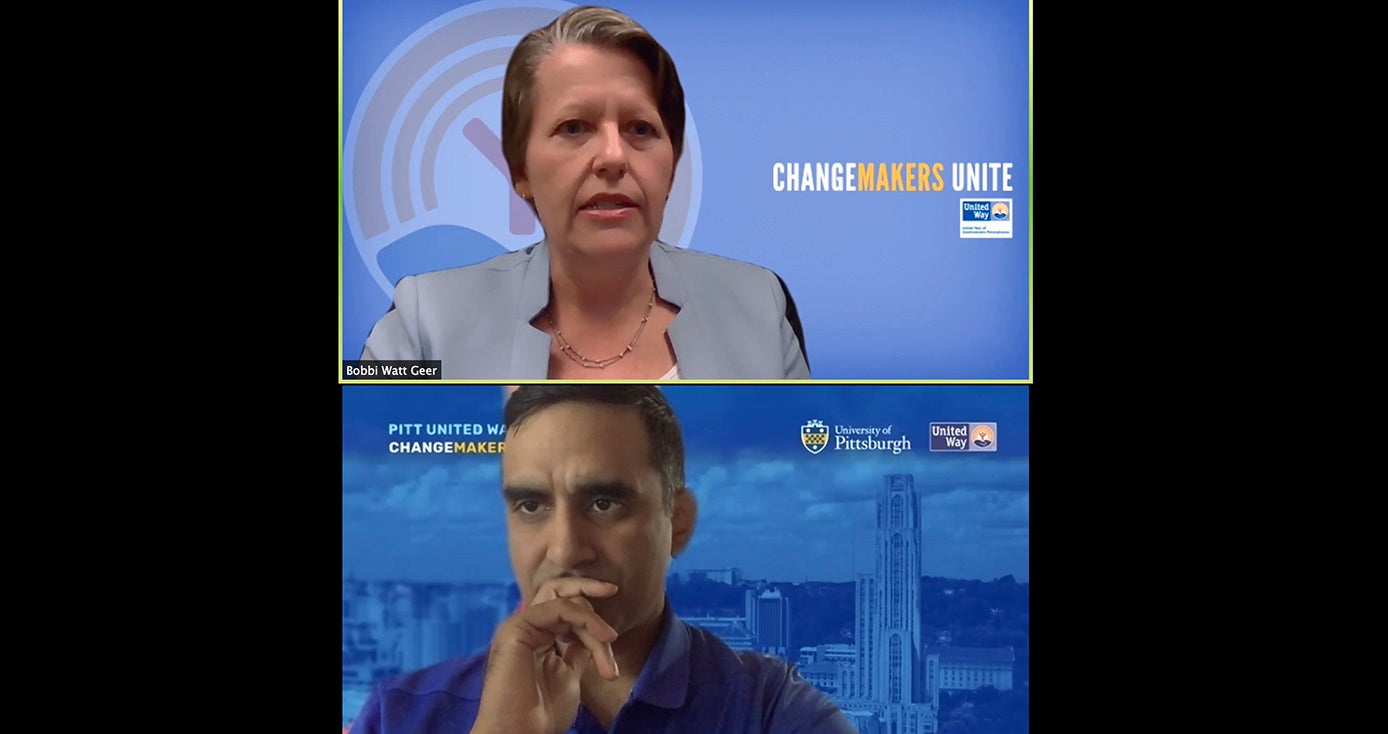 Pitt launched its annual United Way campaign on Oct.1 with a Zoom-based virtual conversation on current challenges facing Southwestern Pennsylvania and the country as a whole.

“Every year, we ask the Pitt family to contribute to the United Way. That request has never been more poignant than it is now in 2020, a year that has challenged all of us in so many ways,” said Sastry. “More than at any time in my memory, it is important that we give back and support each other, especially when so many in our community are struggling with uncertainty, insecurity and loss. Your support has never been more necessary or more appreciated.”

Since that conversation that launched the campaign, nearly $50,000 has been raised—which is almost 7% of the overall goal. The campaign this year will extend through the end of April 2021, and employees will be able to make electronic contributions for its duration using MyPitt.

“The impact on the community started with COVID, but it really has become this triple crisis,” said Geer. “As the public health crisis started to really impact the community, we have now seen an economic crisis, and layered in with that, we also have the crisis of racial equity and social justice. All three have come together to really deeply and widely impact our community.”

Geer cited the two million Pennsylvania residents who applied for unemployment and children and teenagers who aren’t in school. Additionally, she noted that older adults and people with disabilities have become more isolated and unable to access the essential things they may need.

“A lot of people were already having some of those challenges,” Geer said. “But there are so many new people facing challenges. You may have seen this in your families, friends and neighbors.”

The United Way began working with partner agencies in the community, including human service agencies that provide safety net and support services that healthy communities rely on, ahead of the pandemic’s arrival in the region.

“What we were hearing was that they were concerned about getting accurate and timely information, about providing services safely to their clients and about staff who would need to engage directly with clients,” Geer said.

Very early on, the United Way anticipated that emergency basic needs—including eviction prevention and access to utilities and health care—would be priorities, with food being the chief concern. “We have seen the greatest degree of food insecurity in our region,” said Geer.

In addition to financial contributions and volunteer efforts, Geer pointed out several collaborations resulting from the University’s partnership with the United Way that have already helped members of the community, including Pitt IT’s tech support line for families trying to help their children learn from home.

Additionally, Geer said that getting involved with advocacy and policy issues in the community, state and nation would be critical to recovery.

“There are so many volunteer opportunities that the Pitt community can engage in that will be really helpful, and if you can raise your voice around advocating for policy that will help us recover,” said Geer. She encouraged members of the Pitt community to reach out to their United Way representatives or visit the University’s campaign website to learn more.

The Pitt United Way Campaign website has information about how you can donate to support the Pitt campaign.

Donors can contribute to the United Way Impact Fund, through which the United Way targets funds to support the local agencies that serve populations facing the most critical current needs, or donors can instead choose from hundreds of local and regional organizations to direct their contributions toward.