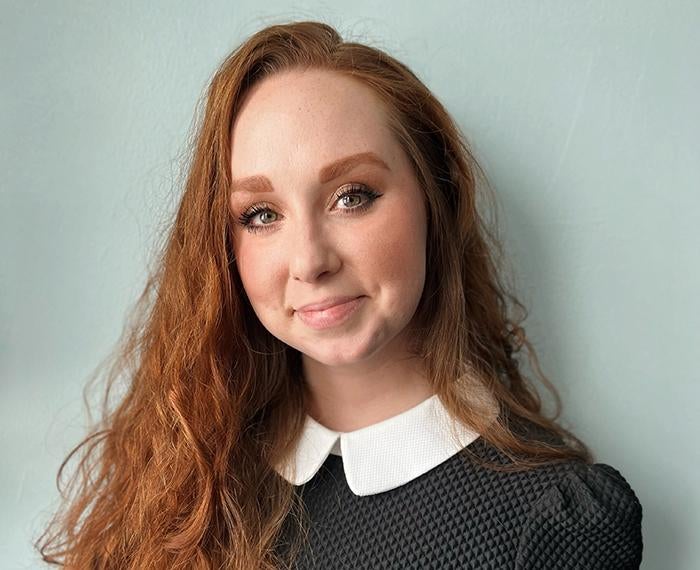 For Courtney Colligan, all the world’s a stage — but not quite in the way Shakespeare meant.

The University of Pittsburgh’s Department of Theatre Arts graduate, who passed her doctoral defense in July, grew up in Stow, Ohio, with access to theater and literature from a young age thanks to her mother, a long-time English teacher. She says this early exposure allowed her to recognize and understand people’s responses to life’s challenges.

“Becoming an actor before becoming a scholar allowed me to look at people through their situations, understand their complexities and humanize them,” said Colligan.

In 2020, after defending her prospectus on a Shakespeare trilogy set in a fictionalized women’s prison, she said solely writing about a white, cisgender author no longer held appeal in that it didn’t forward issues she believed in. Around that time, she was invited to apply her understanding of people to a different cause as executive director of the Unit Literacy Group (ULG) and accepted the opportunity.

ULG is an educational-based recovery and literacy program out of SCI Somerset, a state correctional institution. In this role, she helps incarcerated people translate the skills needed to perform on stage or engage with literature for real-world applications.

“The vision for the Unit Literacy Group is more than just continuing education,” said Colligan. “The ULG grounds itself in recovery by rectifying literacy gaps, building self-esteem and self-worth and fighting against the carceral state — and, within that state, the disillusionment of the detained.”

Colligan supports ULG’s founder, who goes by Kabasha, and his mission to establish a ULG branch in every Pennsylvania prison. Kabasha is a native of Pittsburgh and veteran diagnosed with severe post-traumatic stress disorder who received a life sentence within two years of his honorable discharge.

While ULG’s expansion beyond Somerset was delayed during the pandemic, the group has nevertheless continued its impact.

“Recently, I chatted with one of the newer members of ULG,” said Colligan. “This young man talked about the program being unlike anything he’d ever experienced because he was given the space and encouragement to speak his mind and develop his writing skills. Following release, he excitedly told me he’d like to start a nonprofit that helps families navigate the criminal justice system and avoid experiencing what he and his family endured.”

Colligan has also amplified voices outside the penal system.

As a previous fellow for Humanities Engage, a cross-disciplinary project funded by the Andrew W. Mellon Foundation that supports doctoral students’ professional and intellectual development, she worked with GirlGov — a free civic engagement program for high school girls. Participants came from more than 40 high schools across Southwestern Pennsylvania to develop their passion for social justice. For the organization, Colligan developed an impact report and launched a literature review as well as a curriculum to make organizational programming more effective.

Her interest in this organization, she said, stemmed from personal experiences in very male-dominated spaces and academic material.

She said her involvement with GirlGov and ULG showed her post-graduate opportunities and ways to meaningfully problem-solve while also amplifying “voices that wouldn’t otherwise be heard and humanizing the systems that people are in and analyzing how the arts help them heal.”

Additionally, her experiences reminded her of why she chose Pitt.

“I wanted to engage students differently and don’t think I would’ve had that opportunity anywhere other than Pitt,” said Colligan. “I’m using my skills as a positive force and helping create performances to render visible people who’ve been erased for centuries and are continuing to be erased. I’m finding ways to use the arts to show what people look like and go through in an honest, realistic way. I want to stay in Pittsburgh; I care about this city.”