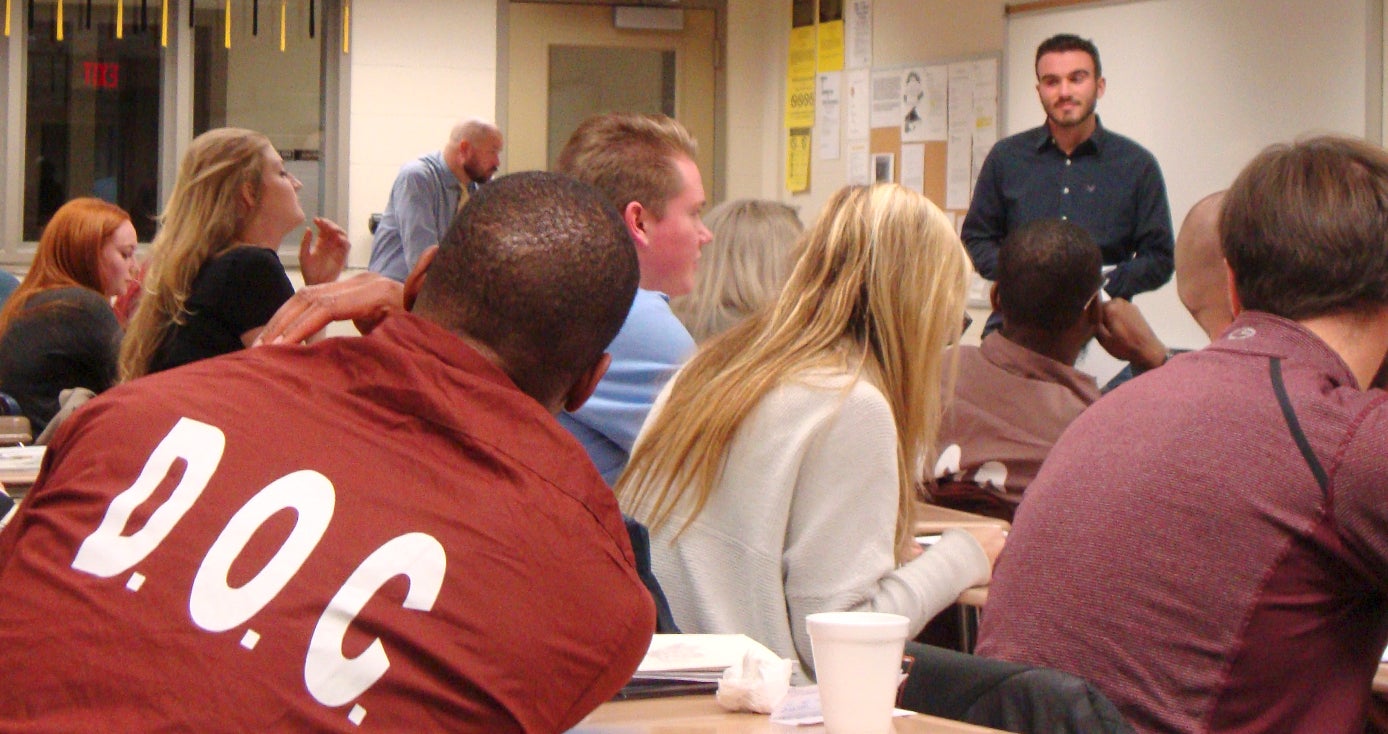 A capstone seminar course — with more writing and a narrower focus than a typical college class — can be daunting for any student.

The course can be even more challenging with no internet and limited access to library resources.

Those were the circumstances for 13 of the 29 students in a University of Pittsburgh political science course last fall. Those 13 students are inmates at the State Correctional Institution (SCI) at Fayette in Southwestern Pennsylvania where the class was held. The other students are junior and senior political science majors at Pitt.

The class, Race and the Criminal Justice System, was a section of the pilot year for the Pitt Prison Education Project, which is part of the nationwide Inside-Out Prison Exchange Program. The course was taught by Chris Bonneau, an associate professor in the Department of Political Science within the Kenneth P. Dietrich School of Arts and Sciences and a co-founder of the Pitt Prison Education Project.

“Unlike service-learning programs inside of prisons, the Pitt students were not brought in to teach or help the Fayette students. We came to class to learn together in a collaborative and open environment that challenged everyone’s understandings of race and criminal justice in America,” said Melana Dayanim, a senior political science major.

Bonneau’s course was one of two Pitt classes held at SCI Fayette in the fall term; the other was Puri’s Imagining Social Justice.

This was SCI Fayette’s first in-person partnership with a college or university. The University of Pittsburgh is one of 21 Pennsylvania colleges and universities, including Pitt–Bradford, listed on the Inside-Out website as participants in the program.

“I was a little skeptical at first,” said Edward Bohna Jr., corrections school principal at SCI Fayette. “Would this work? How would the inmates react and interact with college students? There would be so many variables that could, and would, pop up. How would we work the bugs out? We did, and it is going very well. I believe this program will not only help the inside students but also change the outlook and lives of some of the outside students.”

Inside-Out originated with Lori Pompa, a faculty member at Temple University in Philadelphia, who founded the program in 1997. The program has spread to Canada, Mexico, the United Kingdom, Denmark and Australia.

Bonneau was first introduced to the Inside-Out program while listening to NPR and thought it could be implemented at Pitt.

University administration agreed. Bonneau said that John Twyning, associate dean for undergraduate studies in the Dietrich School, offered to pay for books for the inside students, as the program calls the inmates.

“Inside-Out was a way for me to make a positive difference. Some people build houses; I can’t even build a box,” said Bonneau. “But I can teach. So this program allows me to bring my skills to a population that is underserved and can really benefit from them.”

On each Wednesday of the fall term, Bonneau and 16 Pitt undergraduate students drove about an hour and a half to SCI Fayette. The students carpooled to the facility, which is in a rural area south of the University’s Pittsburgh campus.

On arrival, Bonneau and his students signed in at the front desk and deposited their belongings into a bin before walking through a metal detector. On the other side of the detector, their hands, shoulders and pockets were swabbed to test for drugs. 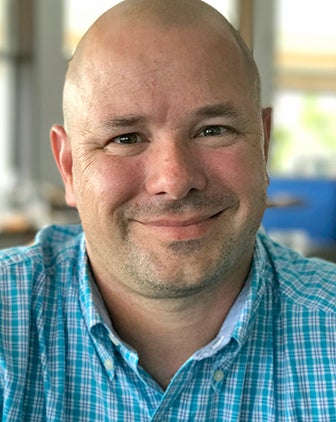 With their visitor badges visible, Bonneau and his students were led down a long hallway, across the grounds and into another building that housed their classroom where they were later joined by the inside students.

During class, Bonneau and the students discussed assigned reading material, which he had to make available in print for the inside students. Discussions about racial bias, restorative justice — attempts to address crimes through tools other than punishment — and other topics were free of distraction by laptops and cell phones, which are not permitted in the facility.

Parker Forman, a junior studying political science and communication, was surprised by the transparency of the inside students with regard to their experiences.

“Many of them were very brave to share their stories when they did not need to, something that I know I could not have done,” he said. “They put their darkest moments on the table and let us evaluate them. In all honesty, after the first few classes, my view of them went from prisoners to classmates to friends.”

Inside student Adam said he views the class as therapeutic and loves Bonneau and the Pitt students (at the request of SCI Fayette, a pseudonym is used for this student). Adam shared that he likes to read case studies; he works in the facility’s law library.

The course culminated in presentations for which the students were divided into groups of two Pitt students and one or two inside students.

The groups reviewed their presentation materials during the penultimate class session. In Adam’s group, the topic of the discussion drifted from their presentation on parole to the work they had done on their final required papers.

Adam told Pitt seniors Katheryn Hach and Mac Cunningham that he had written 20 pages of his paper; Bonneau had only asked for 15 pages.

“Why are you such an overachiever?” joked Hach.

Beyond the pilot year

The program is continuing this semester with Holding leading Writing for Change. Bonneau has also heard from other faculty members who are interested in furthering the program.

“This program provides Pitt students with an unparalleled experiential learning opportunity,” he said. “Moreover, it shows that Pitt — and the people at Pitt — are not merely concerned with the perpetuation of the institution; rather, we are invested in improving the community around us and society at large.”

An expressive approach to social justice

This spring, 16 Pitt students and 16 inmates in Cory Holding’s Writing for Change course are learning how to tailor their writing to encourage change in their communities.

The class is the second of two English courses offered through the Pitt Prison Education Project, where Pitt students take classes alongside inmates at the State Correctional Institution at Fayette in rural Southwestern Pennsylvania. During the fall term, Shalini Puri taught 16 Pitt students and 16 inside students in her Imagining Social Justice course how to examine the concept of social justice through various creative outlets, including writing and art.

Said Holding: “In all of my courses, I try to realize the potential of what I think of as stance-making pedagogy for students’ mindful participation in civic life. Pitt and Fayette students have been able to think together about how rhetorical positions are formed and performed through intersecting practices of writing, listening, identification, dialogue and civic participation. The hope is that participants learn to realize, invent and perform critical stances in order to communicate — and affect — our own agency in, possible complicity in and resistance to systems of oppression.”