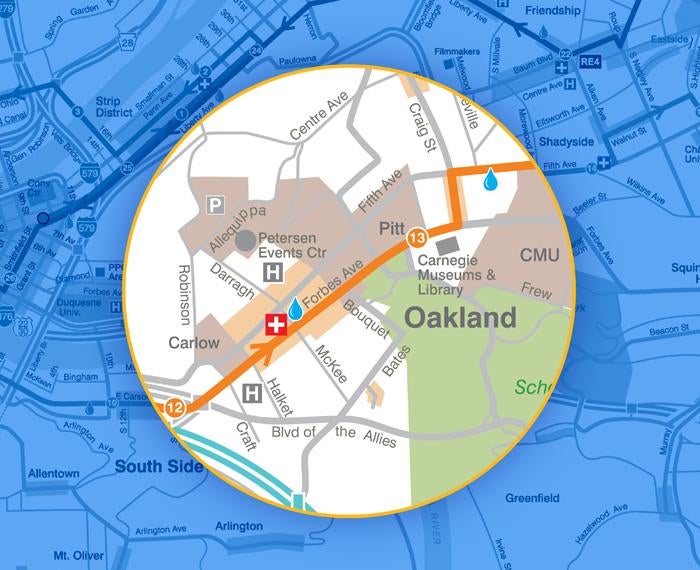 The University of Pittsburgh’s Class of 2022 will graduate on Sunday, May 1, but new grads and their families may have one more challenge to clear before celebrating: The Pittsburgh Marathon.

No, they won’t have to run the race, but the course does cut through Forbes and Fifth avenues in the heart of Oakland on the same day as Pitt’s festivities at the Petersen Events Center (which is also in Oakland, for you out of towners).

Read on for helpful tips and resources as you plan your travel to campus. Doors at the Pete will open after the road reopenings — likely by 12:30 p.m. Graduates should plan to be in their seats no later than 1:30 p.m.

The following streets in Oakland will be closed prior to and during the marathon on Sunday, May 1. The listed times are approximate and are subject to change.

The West End, David McCullough and Birmingham bridges will be closed during the race.

Two other bridges will be closed that weekend due to construction: the Roberto Clemente and Fern Hollow bridges.

The towing will continue through Sunday morning when the city begins rolling closures of the streets used in the marathon.

In addition to Oakland, there will be towing and road closures throughout the city. Impacted neighborhoods will include Downtown, Uptown, Shadyside, Squirrel Hill, Point Breeze, Homewood, Larimer, Highland Park, Friendship, Bloomfield, Strip District, North Shore, West End and South Side.

Parking will be allowed on side streets that are not part of the marathon route, but posted signs must be observed.

The City of Pittsburgh contracts with McGann & Chester towing, based in Beechview. If you are towed, their impound lot is located at 700 Hargrove St., Pittsburgh, PA 15226; their phone number is 412-381-9400. Have your driver’s license and registration available to retrieve your vehicle. Drivers using a rental car must contact the rental agency.

Free parking on the Pittsburgh campus

All University-owned parking lots and garages will be open to the public beginning at 8 a.m. Saturday, April 30, and Sunday, May 1. The Biomedical Science Tower (BST) lot will be available only for handicap permit holders. Parking will be free for graduates and their guests.

Parking may also be available at the city-owned Forbes Semple garage, located on Forbes Avenue between Semple Street and Meyran Avenue.

Shuttles to transport graduates and their guests to the Petersen Events Center will be running Sunday, May 1. View shuttle stops and schedules.

Shuttles will begin running at 11:30 a.m. or when the roads reopen and will include stops at the A, OC and SO lots, as well as the city-owned Forbes Semple garage. Hotel shuttle service will be available from Hilton Garden Inn, Hampton Inn, Residence Inn (on Forbes), Oaklander Hotel and Wyndham Hotel and the University Club.

Following commencement, shuttles will run on a loop until about an hour after the end of the ceremony.