Three Views on One Strange Year

Starting life somewhere new is a major life transition during normal times. But what’s it like when that new start coincides with a world-wracking pandemic? Three first-year members of the Pitt community share their experiences amid COVID-19 as well as some lessons learned and their hopes for the future. 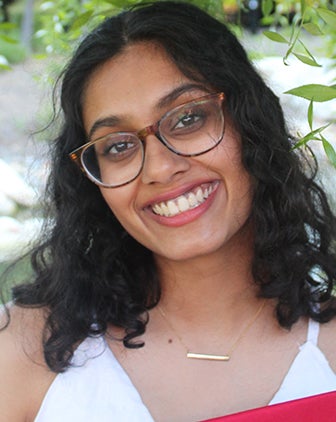 On choosing to attend Pitt, sight unseen: I have never been to Pitt or even to Pittsburgh. When I was choosing what school to go to, I was just deciding where I could see myself thriving, with a lot of resources and a lot of cool people. Eventually, I decided that Pitt was great for computer science. That's how I ended up choosing: I saw a lot of accessibility from Pitt, even as it was virtual. That showed me the school could adjust, and I was excited for that, being able to still do everything even virtually.

On meeting Pitt people while 2,000 miles away: It’s been slightly hard, although with our generation, social media is everything. It was much easier reaching out to people. I also did a lot of trying to find Pitt people near me in the Bay Area so I could connect with them, whether it be virtually or through my phone.

I’m also first-year mentor for the upcoming year and have been meeting some really cool people through that. I thought it would be a cool way to get involved with Pitt and learn more about it as well as help next year’s students navigate their first year the way that I did virtually.

On taking computer science classes from Northern California: When I first registered for spring, I forgot about the time difference, and I ended up registering for an 8 a.m. lab. It wasn’t until the day before the first lab when I was setting my alarm for 8 a.m. that I was thinking about it and realized, “Wait, I don’t think that would make sense because there’s a time difference.” When I did the calculation, it’s a whole three hours. So I was getting up at 5 a.m. for these labs. I did it for at least half this term until I realized I could not wake up at 5 a.m. anymore. Thankfully we got it recorded; I ended up just watching the recordings, which in the end worked really well.

On coming to campus in fall 2021: I’m looking forward to meeting people and learning more about what I want to study with computer science or whatever in the STEM world that I end up doing—gaining knowledge from the people around me and just working with them.

Tea Treherne, first-year student from Pennsylvania who lived on the Pittsburgh campus 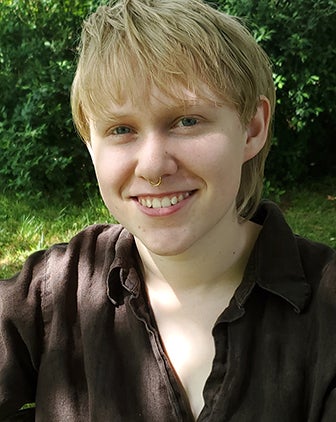 On choosing to live on campus during the pandemic: I came to campus without many expectations, other than I was still in my home state and that things would probably be different because of the pandemic. I attended high school entirely online at home in a rural town and had been to Pittsburgh once, but never to Oakland. Now, at Pitt, I’m in a new city with new people, no family around, independent, but also still have online classes I’m used to. I definitely feel like this benefited me in that I got that chance to transition to college without the overwhelming experience of being thrown into a big city with in-person classes and places to be.

On making in-person connections safely: I got a little bit lucky because I lived in Sutherland Hall, where you have acquaintances right off the bat—living with you, sharing the same living space. Maybe you wouldn't know the people all the way across the floor, but you still knew the people who live around you. And the resident assistants did their best to make sure everyone got to know them and other people on their floor or in their wing. That really helped me.

From there, it’s more meeting someone online or knowing someone beforehand­, maybe people who went to a similar school or are from your area. Even clubs: I was in the birding club at Pitt. Once a month, we’d meet at 7 or 8 a.m. at Schenley Park and walk in groups of four, finding birds and taking pictures. There definitely are ways of having those interactions and meeting new people so that you don't have to worry about COVID as much.

On taking lab classes: It’s a bunch of people in a Zoom call at 7:30 in the morning. No one has their cameras on. It’s just the teacher talking, giving instructions, and then being like, "Go do your lab." Obviously, I'm a freshman. I haven't had in-person lab experiences other than the bio one I attended, but I imagine that's very different from normal chem lab.

What really made bio lab work is you could sign up for in-person labs—four people in the lab, completely separated but still able to do the lab work. I only attended one in person; three hours standing in a lab very distant from your teacher is a bit much to do every other week or every week. But it worked.

On imagining her first year at Pitt not in a pandemic: I get stressed very easily. I have social anxiety, so I feel like the pandemic did help me in a way that I could connect with students if I wanted to, but it didn't feel overwhelming in any aspects. I wouldn't have made most, if not any, of the friends I did otherwise.

Eddie Bonilla, postdoctoral fellow and instructor in the Department of History 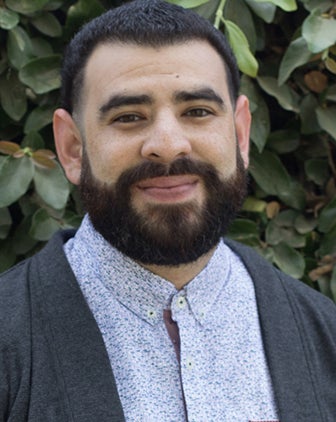 On being a part of the Pitt community without the on-campus experience: I still have not walked into the Cathedral [of Learning] or any [academic] building, although I did finally go to the Petersen Events Center to get my vaccinations. I didn't get to meet any colleagues in person. I feel like I definitely missed out on relationships that I could have built in the hallway, whether at UCIS or the history department.

However, Michele Reid-Vazquez in the Department of Africana Studies connected me with so many people as well as her own webinar series. Gina Garcia in the School of Education plugged me into a sorority to give a talk to via Zoom about Blackness and Latin American history. With that talk, the sorority recorded it and shared it with their moms, and the moms shared it with some of their friends. That was cool. That's something that I don't think would have happened if we were in person.

On teaching in a virtual environment: My challenge was to figure out how not to lecture so much and have more verbal interaction with students. The readings could spur a lot of conversation or could lead to what we call “pulling teeth,” where it was a little more difficult to keep conversation going. In person, you have that nice blend of lectures, readings, conversation and group activities with students.

I also tried to reconsider assignment deadlines and minimize hurdles. Except for the midterm and the final, I gave students the power to do the assignments at the end of the term. Or, if they wanted to knock them out early in the term, that was also understandable.

On meeting students’ pets: I thought there would be more cat and dog appearances. It wasn’t until the last class that after class ended, one student picked up her dog. I thought, "Where was this dog the whole term?" Apparently, she had been right there.

On conducting historical research during a pandemic: Typically, I try to be in person for interviews to connect with people on that personal level. I've done them at coffee shops and over breakfast in people's homes. I definitely lost that in-person element, but it did help that folks were in the home more.

This story was written by Susan Wiedel, associate editor of Pitt Magazine, and Kendal Johnson and Justin P. Jones, student reporters for Pittwire.