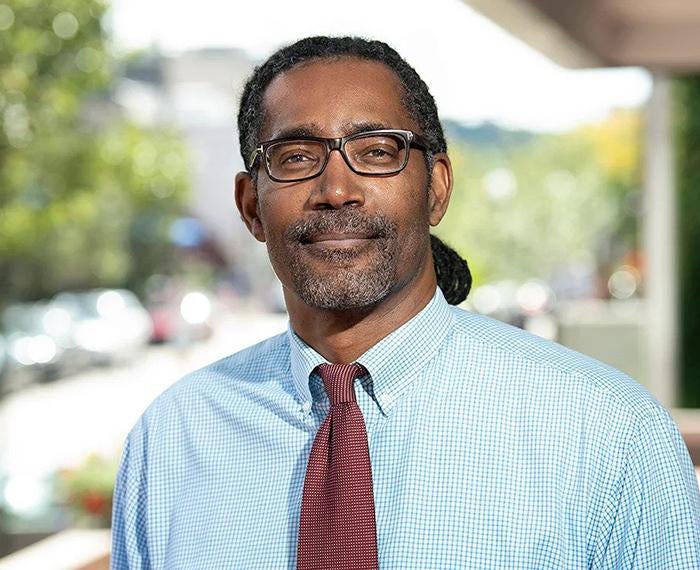 When Ervin Dyer arrived in Pittsburgh more than 30 years ago as a reporter at the Pittsburgh Post-Gazette, he realized there were many stories left untold about the city’s Black communities. As he began to tell them, he quickly recognized the “spirit of independence” in communities like Hazelwood, East Liberty and the Hill District that pushed residents to fight for better lives.

For example, the Hill District, Pittsburgh’s oldest Black community, was once known as “Little Hayti,” to align itself with the independence of Haiti in 1804.

“In the Hill District, you see people fighting for better education and for having a say in what happens in their community. That advocacy is a direct legacy of Haiti’s independence. It’s something Hill residents haven’t given up on,” Dyer said.

Fast forward to today, and that same spirit can be seen in the “communiversity” pilot series taught by Dyer and hosted by the University of Pittsburgh Community Engagement Center (CEC) in the Hill District.

“It gives Pitt a way to go to the people,” said Dyer, an adjunct professor in the Kenneth P. Dietrich School of Arts and Sciences' Department of Africana Studies and senior editor in the Office of University Communications and Marketing. “We were thinking of a way where the education and knowledge generated at Pitt becomes a bridge to the community.”

It spans topics ranging from ancient Africa, the Middle Passage and the life of Frederick Douglass.

The roots of the program

The initial pilot of the series, held from September to October 2020, resulted in creativity and connections, Dyer said, as well as a hunger and thirst for knowledge for participants to learn more about themselves.

Madison Faizon, who is pursuing majors in history and Africana studies for her pre-law track, attended the course in the fall 2020 semester because of her interest in social sciences and said one big takeaway was being able to understand people from a personalized perspective.

“It was extremely enriching to hear from people who were doing work we were learning about in the community,” she said. “It adds a new dimension to the material we’re learning. Learning about narratives rather than just statistics is important in any field, but especially in social sciences.”

Pittsburgh resident Jahqwahn Watson, who registered for the series in the fall as a community member, agreed. They work as a project coordinator at the environmental justice organization, Grounded Strategies.

“There’s a lot of shifting dynamics with families and revisionist history, so it’s important to look to elders and generations before us, because they’re living archives,” Watson said.

The community-university approach itself has its origins in Pitt history. Hill District CEC director Kirk Holbrook met with Yolanda Covington-Ward, chair of Pitt’s Department of Africana Studies, and the latter brought up the idea of revamping a “floating university” model where residents  and students, faculty and staff can learn together, side by side.

“When the Department of Africana Studies was founded after the student takeover of the computer center in 1969, the department was really about trying to be involved in the community. In fact, it was part of the mission,” Covington-Ward said. “This ‘floating university’ concept was something the department did in the ’70s and ’80s, bringing expertise from the department into the community.”

Covington-Ward said through the new communiversity series, students can see the real implications and complications of historical events and how changes over the decades have affected communities.

It gives Pitt a way to go to the people. We were thinking of a way where the education and knowledge generated at Pitt becomes a bridge to the community.

“Bringing students and community members together allows both to mutually benefit,” she said. “The community is able to access a set of skills and expertise that they perhaps they didn’t have access to, but at the same time, the students benefit from seeing beyond the classroom.”

Holbrook also met with Dyer to discuss the latter’s course, which ties in thematically to a project on Black Family Storytelling led by August Wilson House, where Dyer is a board member, and with whom the Hill District CEC partnered with in early 2020. This project focused on collecting oral histories in the Hill District.

“August Wilson told stories of ordinary people, and he thought those stories had value because they connected Black stories to larger world events, from war to migration to political and social change,” Dyer said. “I thought the family storytelling that was happening at the August Wilson House could easily merge with what I was teaching in class.”

After the communiversity pilot program was given the go-ahead, Dyer recruited members of the Pittsburgh Black Media Federation to lead a series of workshops on local topics such as genealogy, research and multimedia. Federation members have been advocating for strengthening coverage of local Black neighborhoods and amplifying voices of marginalized communities. Dyer previously served as president of the federation.

“Sitting in on some of the classes, it was great to see the wealth of information shared by community members across the lifespan and then having dialogue with Pitt students in Dr. Dyer’s class,” Holbrook said. “That’s a perfect example of one of the ways we hope to build relationships through the CECs, bringing community and University side-by-side to learn from and engage with one another.”

Organizers said the communiversity series may be held on a permanent basis, pending feedback from this year’s participants and organizers.

“The Department of Africana Studies, formerly the Department of Black Studies, has had such a rich history with the Hill District community. Dr. Barbara Sizemore, Vernell Lillie and Professor Rob Penny especially, were interwoven into the fabric of the community and had great impacts on Black education and Black arts movements in the Hill District. They became members of the community,” Holbrook said. “Their involvement and that of the department years ago is one of the greatest examples of the longstanding University and community collaborations Pitt has had in the Hill. It is a legacy and connection that we want to revitalize through this new partnership with the CEC.”