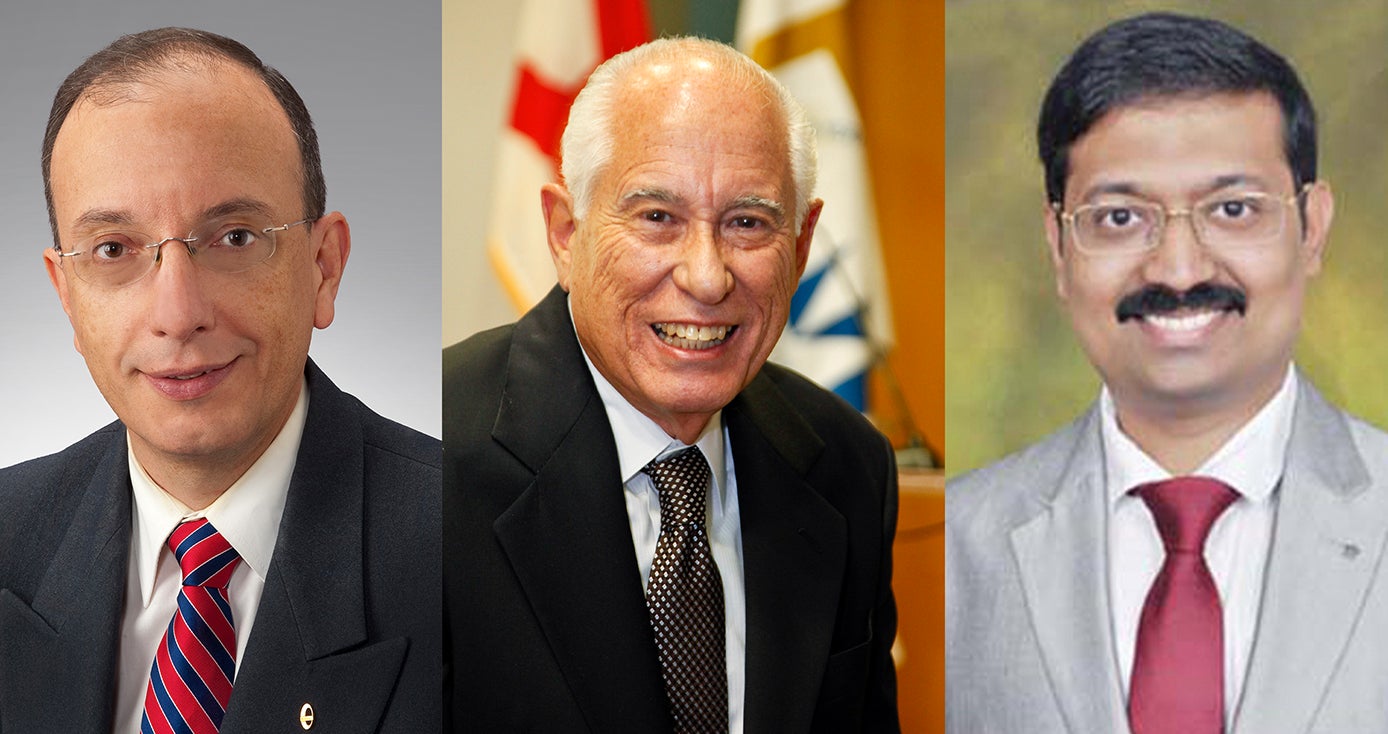 Two renowned Latinx scholars at Pitt and a senior engineer at Intel Corp. are the three winners of this year’s Sheth Distinguished Faculty and Distinguished Young Alumni Awards for International Achievement. The honors were granted to the recipients at two separate virtual ceremonies in April.

The Sheth Awards were established in 2012 by the Sheth Family Foundation, founded by Jagdish N. Sheth (BUS ’62, ’66) and his wife Madhu. The Georgia-based foundation fosters education, wellness and sustainability in the U.S. and India.

Faculty honors were given to Diego Chaves-Gnecco, professor of medicine at Pitt and founder of the region’s first pediatric bilingual-bicultural clinic in Southwestern Pennsylvania, and Carmelo Mesa-Lago, Distinguished Service Professor Emeritus of Economics and Latin American Studies at Pitt.

The two awardees spoke at a virtual fireside chat on April 8, where they were interviewed by Patricia Documet, associate professor of public health and director of Latinx research and outreach for the Center for Health Equity. Documet, a former student of Mesa-Lago’s, praised his teaching and mentoring skills. She is a colleague of Chaves-Gnecco’s and called him “the most trusted voice for Latinx people in the area today.”

Mesa-Lago, widely known for his studies on pension and health care reform, advocates for universal health care in the United States, as countries such as Costa Rica have had for decades. He noted that Costa Rica’s plan relies on contributions from employers and workers, but the state finances health care for the poor.

“There is also no distinction in the treatment of the two social groups,” he said, adding that

“if small countries like Costa Rica can achieve this, the United States surely can.”

Regarding the vaccine against COVID-19, both awardees said Latin America is behind and will take a long time to catch up. “The pandemic will exacerbate this inequality that already exists already in the health care system,” said Mesa-Lago.

Chaves-Gnecco favors meeting the population where they are, right in the neighborhood.

“We need to start vaccinating people in the grocery stores, in their churches and at their community events. We need to go to Latino restaurants and vaccinate the employees and customers. We cannot leave anybody behind,” he said.

He added that his clinic, marking its 20th anniversary this year, has been doing this work. It is also attracting patients from as far away as Denmark and Indonesia and that the initiative has “gone beyond the dreams that we first had.”

Both awardees agreed that prevention is key in health care. And while Mesa-Lago said prevention is relatively cheap compared to medicine, “it is really hard to demonstrate to a family or to politicians the value of something averted.”

In a second presentation on April 22, the Distinguished Young Alumni Award was given to Vyasa Sai, a senior hardware engineer in the visual technologies team at Intel Corp. in Folsom, California. Sai earned his PhD in computer engineering in 2013 from Pitt’s Swanson School of Engineering.

He also studied in Pitt’s RFID Center of Excellence, one of the world’s top programs of its kind. RFID, or radio frequency identification, is a form of wireless communication that uses radio waves to identify a tagged object. Its applications range from tracking items along a supply chain to disaster warning systems.

“As the whole world moves toward big data in the health care sector and elsewhere, we need corresponding hardware to make the application possible,” said Sai.

Regarding innovations in the Internet of Things (IoT), Sai said they have been apparent during the pandemic. “In the dispensing of vaccines, trying to predict where the pandemic may have a high impact, in technology related to masks or transportation—in every aspect of the pandemic response, IoT has seen a lot of innovation,” he said.

In the conversation with Belkys Torres, executive director of global engagement at Pitt’s University Center for International Studies (UCIS), Sai spoke highly of the mentors who guided him while he was at Pitt. He says he tries to give back by mentoring high school and undergraduate college students.

Torres responded that UCIS is trying to do more to broaden opportunities for alumni to network with current international students across many fields. “Your advice is nodding to the fact that we’re headed in the right direction,” she said.

Sai said he has been heartened by an increasing number of young women entering STEM fields and says his employer Intel makes a diverse workforce a priority.