Rooted in Success: CHS Sustainability Lab Students Grow in, and for, the Community 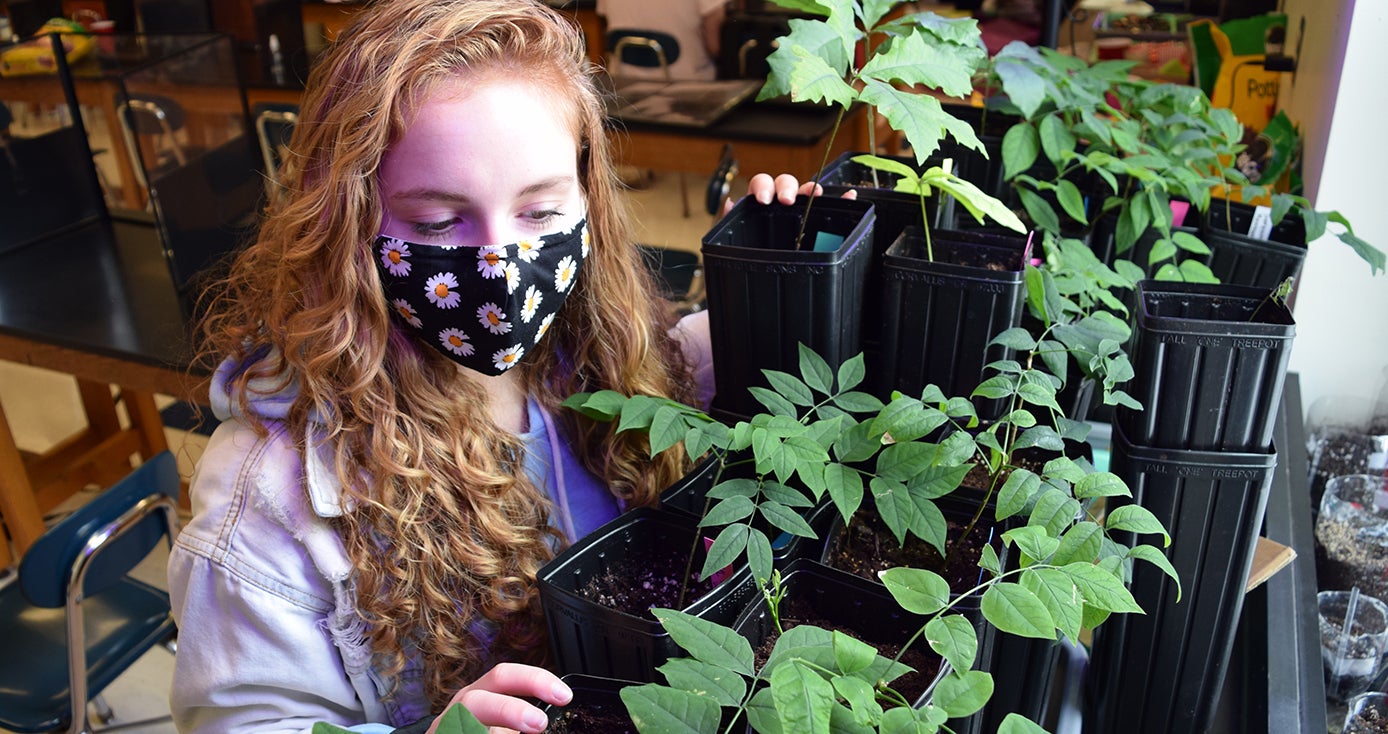 A group of Shaler High School students who are taking a new Pitt College in High School (CHS) sustainability course are putting the conservation lessons they’re learning into action in their own backyard.

Their teacher, Abbey Nilson, is bringing them the same 3-credit Sustainability Flash Lab course content that Pitt Geology and Environmental Science instructor Ward Allebach is teaching Pitt undergraduates in the Kenneth P. Dietrich School of Arts and Sciences this term, albeit in a yearlong, rather than one-semester format.

Nilson’s students are all in grades 10-12 and have completed biology as a prerequisite. The sustainability course is centered on at-home lab projects in which students examine the impact of their own water use, energy use, transportation and food choices as well as on consumption, trash and recycling.

It also includes an outreach component in which students share what they’ve learned about implementing more sustainable practices with their campus or local community.

As the faculty liaison for the CHS course, Allebach isn’t involved with the day-to-day teaching in the high school classrooms, but he worked with the teachers at Shaler and at Monongahela High School to design and implement the course for their students.

“You can take every one of these issues and dig deeply into them,” said Allebach, noting that the year-long version of the course for high-schoolers enables in-depth exploration of the labs that pique students’ interest.

A lab on single-use plastics motivated Nilson’s students to propose building a planter on the school grounds out of ecobricks — building blocks made from used plastic bottles that are stuffed tight with other used plastics — to raise awareness about plastic waste.

The main focus of the course is for students to assess their individual environmental impact, rather than to take on community projects, Allebach said. “Students come in every week with ideas about what conservation means—the home labs are getting them to think,” he said. “But it’s cool when they want to take it further. They’ve learned and they want to spread that message.”

Said Nilson, “They’re looking at themselves and their own actions, then also communicating to others when they implement change in their own life.”

Perhaps the Shaler students’ most ambitious sustainable effort is a tree-planting fundraiser to benefit a land conservation effort in their own school district. They’ve turned their classroom into a nursery for native tree seedlings, which donors can sponsor for a contribution of $15 or more.

Their GoFundMe campaign quickly surpassed its $8,000 goal. Proceeds benefited a successful community effort to purchase a 155-acre parcel known as Girty’s Woods, where the seedlings will be planted. The full $703,546 that was needed to preserve the land as a greenspace and protect it from development was raised by mid-March, ahead of the March 31 deadline.

Nilson learned of the Save Girty’s Woods effort last summer and proposed the tree project as something the students could do regardless of whether they were learning remotely or in-person.

Early in the school year students picked up seeds or had them mailed to their homes.

“Now trees are everywhere,” she said, noting there are about 300 saplings awaiting planting this spring. “The students have them at home. The classroom is filled. Some are at my house.”

Nilson found it easy to interest her students in the community project. “It’s where they live and hang out,” she said. They’ve embraced it in multiple ways: In fall, students participated in a litter cleanup on the property, and separated the recyclables they collected. They helped at a spaghetti dinner fundraiser and an art auction benefiting the grassroots effort and volunteered to share information at local farmers markets. They even landed an interview on local TV news to talk about their fundraising project.

Said Allebach, “The purpose of a class like this is to help students do something they’re passionate about. … The idea is to spark that intellectual interest in their minds so they can find their own path and go down their own road,” he said. “What Abbey is doing represents that perfectly.”

Any of Nilson’s students who pursue higher education at Pitt stand to find themselves well-prepared for Allebach’s popular Sustainability course, in which teams of undergraduates propose and implement projects on campus and in the community.

Many of those projects have taken root, contributing to the ongoing growth of the campus culture of sustainability even after their creators have graduated. Among them: shelters for solitary bees across campus; the University of Thriftsburgh campus thrift store; the Pitt Bicycle Collective; an on-campus grocery store and the BYO(Bag) reusable shopping bag program.

The credits the students are earning through Pitt’s College in High School program count both for high school credit and for college credit—not solely at Pitt.

Typically, about 10 percent of CHS program participants come to Pitt, said program director Michael Giazzoni, estimating that about 400 first-year students arrive on campus each fall with Pitt credits earned through the program.

Pitt’s College in High School program is the largest and oldest concurrent enrollment program in Pennsylvania. For four decades, it’s been helping high school students get a taste for college-level academics while earning credits at a reduced cost.

Pitt’s CHS program reaches a broad cross-section of Pennsylvania high schoolers. More than 35 courses are offered in partnership with over 300 teachers in more than 130 high schools—public, private and religious.

“CHS has been growing steadily,” said Giazzoni. “Last year over 4,000 high school students took over 5,000 Pitt courses.” The typical CHS participant takes one 3- or 4-credit course, but at least one-third take more than one, he said.

Students taking CHS courses not only get a jump start on earning college credit while fulfilling high school credits but CHS courses often are weighted in high schools, which can help boost students’ GPAs and strengthen their college applications.

CHS program administrator Denise Korzon, a former high school teacher, said the dual enrollment program is often thought of as an opportunity for honors students, “But really it’s for any student who is considering going on to higher education.”

She noted that Pitt has been expanding its CHS curriculum beyond typical advanced-placement offerings to include courses with broad appeal—such as the Sustainability Flash Lab—that could spark a student’s passion and inspire their career path. Plans are in the works to add courses in sports analytics using big data and in broadcasting, she said.

Said Giazzoni, “The desired outcomes are to help students be better academically prepared for college, to develop more realistic expectations about college coursework, develop confidence in the ideas of enrolling and succeeding in college, and improve study skills and time management skills. Student surveys show that students agree that we are accomplishing our goals.”