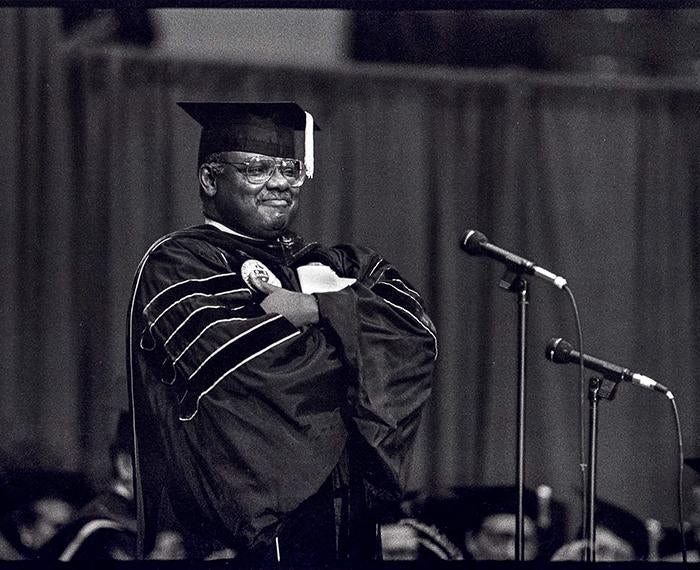 Donald M. Henderson, who served as the University of Pittsburgh’s first Black provost from 1989-1993, advocated for advancements and opportunities that improved the University — and embodied triumph over challenge.

Henderson, who retired to Florida, died June 8 from medical complications associated with congestive heart failure. He was 91.

“Donald transformed the role of provost, and the University of Pittsburgh itself, during his tenure here,” Chancellor Patrick Gallagher said. “He was a master collaborator, a mentor to many and a tireless visionary who walked the walk — and then some. I am grateful for his many contributions to Pitt and proud to do my part to help advance his bright legacy of cultivating learning, curiosity and leadership for the greater good.”

Henderson’s achievements at the University included being involved in the Campus of the Future initiative with AT&T, which led to the installation of Pitt’s first fiber network; consolidating several of libraries into the University Library System; organizing and hosting Nelson Mandela’s visit to Pitt; and serving as a champion of the Pittsburgh Supercomputing Center.

Through his actions and principles, Henderson also helped Pitt become a better and more just institution.

“The University of Pittsburgh would not be the high-powered academic institution it is today without the distinctive contributions made by Donald Henderson,” said friend and colleague Mark Nordenberg, chancellor emeritus of Pitt. “As provost, he elevated the academic mission in ways that laid the foundation for Pitt's dramatic rise within the ranks of America's top research universities. He helped create a framework for institutional progress that made Pitt a magnet for outstanding students and positioned us to recruit, support and retain top faculty members."

Nordenberg added, "There has never been anyone like Donald. He was a pillar of strength, a great listener and unfailingly respectful. These attributes reflected his values and were paired with a quiet self-confidence that permitted him to look at things through a lens that produced strong, caring relationships and outstanding results for the University.”

Born Feb. 22, 1931, in Poughkeepsie, New York, Henderson grew up in Youngstown, Ohio. The second of six children, he was raised by loving parents, Hugh and LeeHilda. Henderson attributed his academic and athletic success to their encouragement and prioritization of education.

While Henderson's football prowess earned him an athletic scholarship, he was drafted into the Army in 1952 and served in the Korean War. He was honorably discharged and used his G.I. Bill to continue his education at Kent State University, where he earned bachelor's and master's degrees in sociology.

In 1956, Henderson met Bebe Norris on Christmas Day at a party hosted by his Kappa Alpha Psi fraternity brothers in Cleveland, Ohio. They married in 1959 and were described by family as soul mates. The inseparable pair enjoyed traveling and, during their first year of marriage, established an annual tradition inspired by “Breakfast at Tiffany’s”: They visited New York City and followed in the footsteps of the film’s lead characters.

After Kent State, Henderson came to Pitt to pursue a doctorate in sociology, which he completed in 1967. After graduating, he accepted a teaching position at the University of Akron, and he was also a lecturer at Western Reserve University in Cleveland.

Henderson left Ohio to work for Southern Illinois University, where he served as director of experimental studies. During this appointment, he was director of the Experiment in Higher Education, a collaboration with the Office of Education, a division of the Department of Education, and supported by President Lyndon B. Johnson. The study explored the potential role the office could play in helping urban universities respond more appropriately than they had in the past to urban problems by devoting resources to Black youths to help them matriculate.

This project led Henderson to relocate to Washington D.C. and partner with leaders from Temple University, the Massachusetts Institute of Technology City Planning Department and other universities and organizations.

A return to Pitt

Jack Daniel, the first chair of what was then called the Black Studies Department at Pitt, interviewed Henderson for the associate provost role in 1970, following a call from the Black Action Society to increase the number of Black administrators.

After meeting Henderson, Daniel said he concluded the search.

“Donald was a professor of sociology and recognized that the race-related achievement gap was an opportunity gap: If Blacks were given equal opportunities, they would excel,” Daniel said. “Donald was an early innovator in creating equal opportunity programs for Black students in higher education. He did the same for Black staff, faculty and administrators while consistently acting in the best interests of the larger University community.”

In the Pittsburgh Post-Gazette’s obituary for Henderson, Daniel referred to him as “iconic” and a “north star” for many at Pitt when Black senior leaders in higher education were sparse. “We were friends, brothers collaborating in the struggle for freedom, justice and equality,” Daniel said.

Henderson was appointed provost in 1989, having established himself as a pivotal part of Pitt and “an astute observer, a rock-solid professional, and the respected leader to whom people would turn for solutions when there were difficult issues to face,” Nordenberg said.

As provost, Henderson stabilized the position and expanded its impact and influence and was a vital part of bringing the concerns and challenges of Black University members to the forefront.

“Donald was one of the most consequential leaders in the history of the University of Pittsburgh,” Nordenberg said. “He was a trailblazer.”

“ ‘The Don,’ the boss — as he was affectionately called by those who knew him at Pitt — was who Black students, staff and faculty went to for help, sound guidance, advice and an inspiring word,” Wharton-Boyd said. “Everyone respected him; he was a brilliant and caring guy with a comforting spirit.”

A physical marker to Henderson's time at Pitt — a clock dedicated to him by the Student Government Board when he retired in 1993 — sits at the corner of Bigelow Boulevard and Forbes Avenue.

Then Student Government Board President Jake Brody told the Post-Gazette about the dedication: “He was such a steadfast supporter of the student experience and created a great relationship between the University and the students that we wanted to create a bit of a legacy. In classic Provost Henderson fashion, he was humbled by the recognition. It's nothing he would ever have sought out.”

After Henderson’s wife died in 2014, he focused on family and friends, playing the flute, listening to jazz and blues records in his office, reading, writing poetry and watching tennis.

Instead of gifts, his family asks that memorial contributions are made to the Dr. Donald M. Henderson Endowed Scholarship, which will support Black students in need.