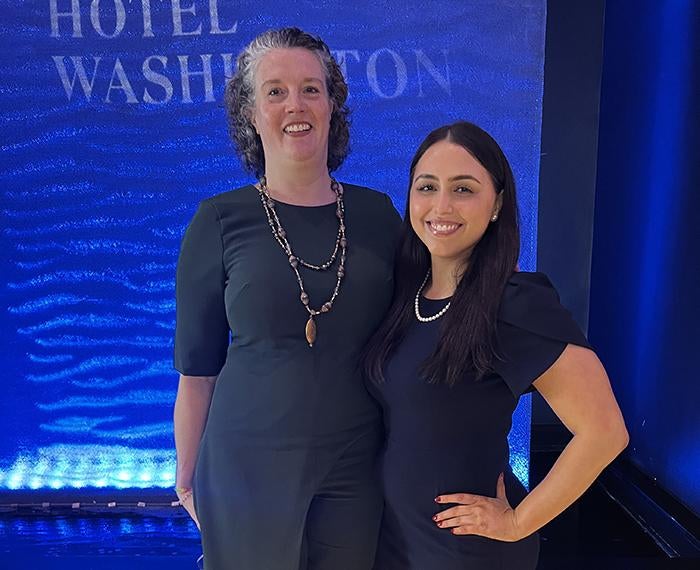 Amy Raslevich got the surprise of her life two weeks ago when she received an out of the blue FaceTime call from former President Barack Obama to mark the 12th anniversary of the passing of the Patient Protection and Affordable Care Act (ACA).

During the call, Obama thanked Raslevich (pictured above, left), a doctoral candidate in Pitt’s School of Public Health, for her health care advocacy, and they talked about, well, everything.

“Obama and I talked about a ton of things — from health care to basketball to his mom and mine,” said Raslevich. “Thankfully, I happened to be dressed professionally because I had recorded my three-minute thesis submission that day.”

The call was only the beginning of what has become an “amazing and surreal experience,” said the fourth year student in Health Policy and Management program.

Last Friday, Raslevich received an invitation to attend President Joe Biden’s April 5 signing of the Executive Order on Strengthening Access to the Affordable Care Act and Medicaid at the White House.  The event also marked President Obama’s first public return to the White House since leaving office in 2017.

“When I received the email invitation from the White House about attending the signing of the [executive order], I honestly thought it was an April Fools’ joke,” Raslevich said with a laugh.

Raslevich was one of several dozen people in the room on Tuesday afternoon to witness the historic event that also included remarks by Vice President Kamala Harris.

Since the start of her health care advocacy work in 2018, Raslevich has met with many elected officials, including President Biden during a campaign stop in Pennsylvania last year. She has been a major proponent of protecting the essential health benefits the ACA provides, which she and her family rely on. Raslevich, 50, is a breast cancer survivor and both of her children have celiac disease.

Raslevich’s doctoral work focuses on health access and equity among Medicaid services. After her experience with breast cancer, Raslevich became particularly passionate about health care and motivated to pursue her doctoral degree.

“Through my experience and in getting my PhD in health policy at Pitt’s School of Public Health, I’m learning that the Affordable Care Act benefits every American, whether they realize it or not,” Raslevich said. “It’s not perfect and that’s what both presidents talked about today. But, we’re moving forward and fixing it so that people can afford and access health care.”

Sapienza (pictured above, right), who has Type 1 diabetes, had written him an emotional letter about a time when her insulin shipment was late, forcing her parents to pay $800 out of pocket for a last-minute supply.

“Having Type 1 or Type 2 diabetes isn’t a choice,” said Sapienza, who is now pursuing a nurse practitioner’s license. “And the last thing someone with diabetes should have to worry about is the cost of insulin. So patient advocacy is close to my heart. Health care is a right, not a privilege.”