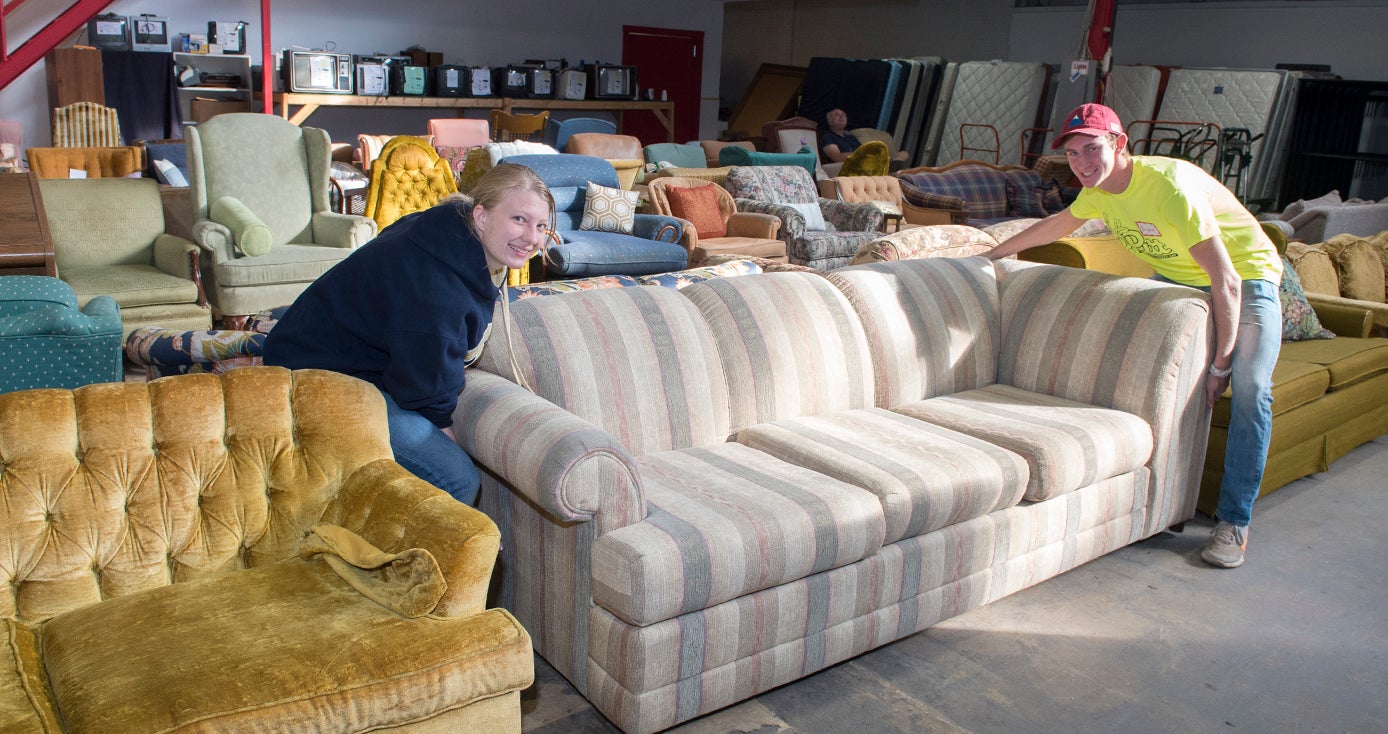 The University of Pittsburgh’s largest single day of service, Pitt Make a Difference Day (PMADD) turned 10 this year. From neighborhoods throughout Pittsburgh — and from states as far as Nevada and Florida — Pitt people turned out by the thousands on Saturday, Oct. 21, to give back to their communities.

Ninety-nine sites nationwide hosted Pitt affiliates to make a difference. In Pittsburgh, 81 buses and six vans took volunteers to area projects. Five projects were within walking distance from campus and two others took place at Pitt. In addition, all regional campuses and — for the first time — nine alumni chapters drew a total of 4,194 people to mark the occasion. The whole operation was orchestrated by a team of students with the Office of PittServes.

“Months ahead of time, students are already thinking about one Saturday in October,” said Misti McKeehen, director of PittServes, a University-wide initiative engaging students in community service. “To be able to do all of that, on top of keeping up their grades, managing all their other commitments … it really is amazing,” she said of the PMADD student planning committee, co-chaired by senior Nisha Nanavaty and junior Ali Rich.

“It’s a really great opportunity for the University to come together to celebrate service,” McKeehen added. She estimates that over the years, PMADD has amassed more than 20,000 registrations, which translates to a collective 120,000 hours — or 5,000 full days — of service to the region.

“Service is part of the culture at Pitt,” said Dean of Students Kenyon Bonner. “We love seeing our students lift others up as they climb in their personal journeys.”

Student organizations and residence hall communities worked from 9 a.m. until 3 p.m. planting gardens, painting murals, picking up trash, stocking food pantries and distributing furniture to families in need all over the city.

We have spent so much time inside studying this past year, so it was really great to get to contribute to the community for a few hours.

An EngagePitt campaign also crowdsourced more than $3,000 from Panthers who weren’t able to make it out on Saturday, but still wanted to chip in.

On campus, Lauren Ferreri (SHRS ’16) and a large group from­ her Physician Assistant Studies master's program were assigned to a project making chemotherapy hats and port pillows for pediatric cancer patients.

“We have spent so much time inside studying this past year, so it was really great to get to contribute to the community for a few hours, especially in the field that we are dedicating our time to becoming a part of.” It was the most meaningful PMADD of Ferreri’s four years participating, she said — and not by accident. The planning committee made strategic efforts to place volunteers with projects that reflected their goals, McKeehen said.

“What I think the day is evolving into now is more of a launch pad for people doing service year-round,” said McKeehen. Student groups have already identified ways to continue fostering the community relationships built on Pitt Make a Difference Day, she said.

In recognition of PMADD’s impact, the effort was one of 14 winners last year of the national Make a Difference Day Award. Pitt received $10,000 from the honor, which will help to keep PMADD projects sustainable. 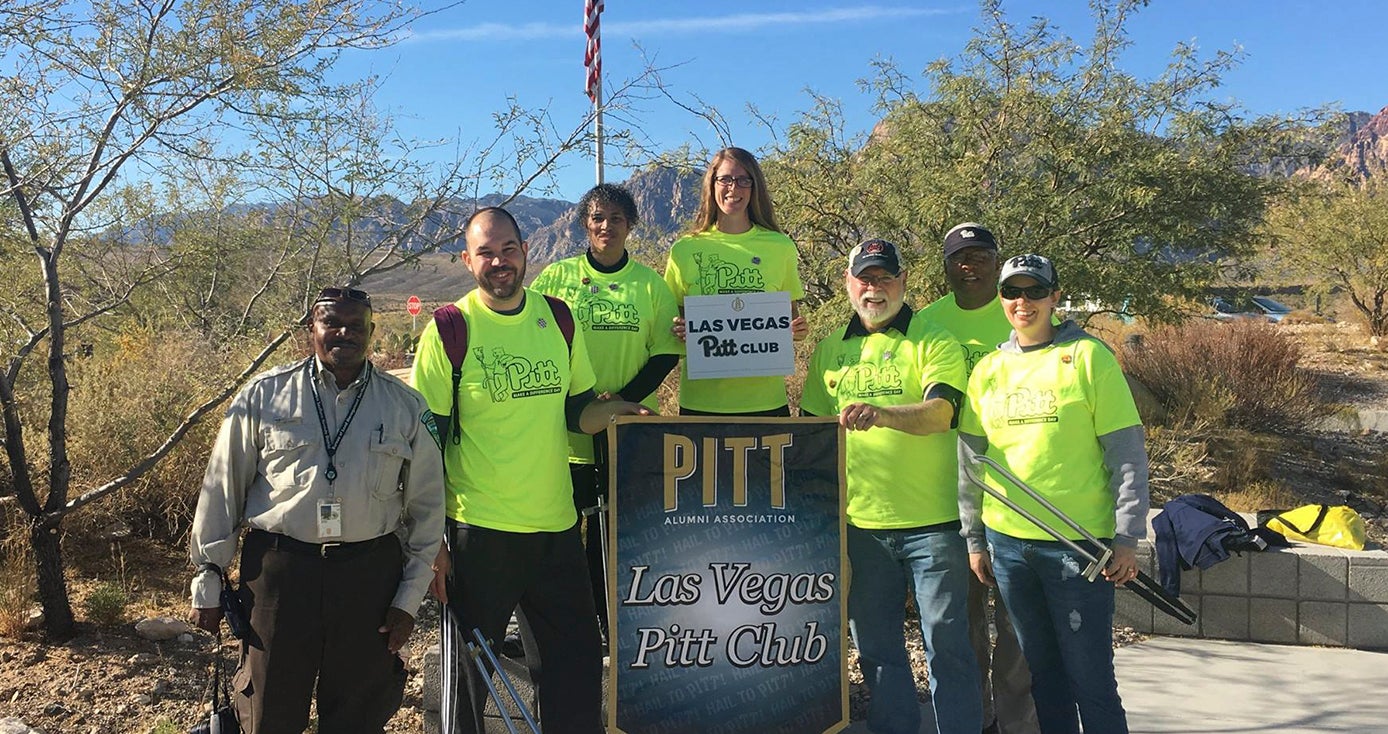 Making a difference across the nation

What began in 2008 as a way to engage first-year students in neighborhoods beyond the Pittsburgh campus has grown into a pillar of the University’s identity. And though it is the students who have traditionally done much of the heavy lifting, alumnus Tony Fountain (A&S ’70) spearheaded an effort to get alumni clubs to join the fun this year.

One of the founding members of Pitt’s Black Action Society, Fountain has always been committed to service. When he first learned about PMADD last year at a presentation Bonner made at the October 2016 Alumni Association board meeting, he saw a perfect way to engage alumni in communities around the country. Part of the draw of giving back for him is the camaraderie aspect and the appreciation expressed by those served, he said.

So, while clusters of Panthers in neon shirts fanned out across Pittsburgh, Fountain and a group of Las Vegas alumni cleaned up trailheads at the Red Rock Canyon National Conversation Area. He also worked with Ron Idoko and Shannon Mischler in the alumni association to organize projects at eight other Pitt Clubs in six states — Florida, Nevada, New Mexico, Ohio, Texas and Virginia.

“Wherever there’s a societal need not met, volunteering helps connect you to the greater good in the world. And, it answers the question, ‘What can I do?’” Fountain said. Universities — especially public institutions such as the University of Pittsburgh — have a duty to serve the community in which they’re located, he said, adding that his Las Vegas group was enthusiastic about participating PMADD again next year.