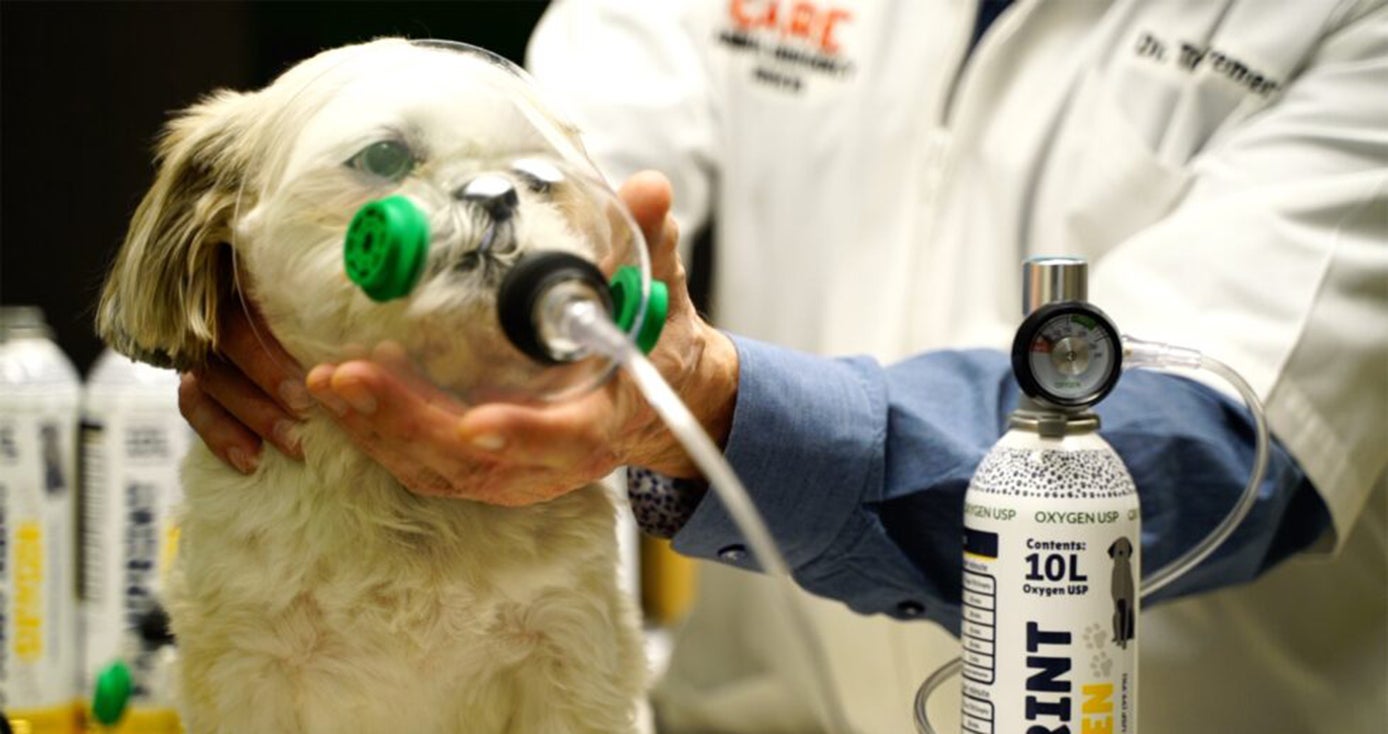 Starting a business wasn’t on Blake Dubé’s (ENGR ’17) mind when he enrolled at the University of Pittsburgh.

However, the chemical engineering alumnus from Pitt’s Swanson School of Engineering now finds himself at the forefront of addressing respiratory needs for animals as a local entrepreneur, a feat that recently landed him on the Pittsburgh Business Times’ 30 Under 30 list.

“Starting off in engineering school, I had a lot to learn. It was the people around me—my professors, colleagues and co-founders—that helped me realize how I could use my education to solve real world problems,” said Dubé, co-founder and CEO of Aeronics, a spinout company formed out of Pitt.

Aeronics focuses on manufacturing portable medical oxygen tanks that are smaller in size than traditional tanks, using a technology Dubé studied while an undergraduate—and with help from an advisor who would help the young engineer and entrepreneur change his career focus. Through the company’s Pawprint Oxygen brand, the company found its niche in the veterinarian market shortly after spinout out in 2017, while the tanks were in the prototype phase.

“A veterinarian who happened to be our landlord at the time came to us with a heartbreaking story about a dog that died in her arms on the way to the emergency hospital because they didn’t have portable oxygen,” said Dubé. “She told us this was a pretty common problem. Even though oxygen is standard of care in veterinary medicine, it’s often just not accessible. We made a prototype to suit her needs, but saw the need existed for veterinarians and pet parents everywhere.”

While Dubé said Aeronics is continuing plans to make oxygen tanks for humans, the company is focusing on pet delivery systems, which are about one-tenth the size of the tanks for human patients. Each tank comes with adjustable flow rates for oxygen to be administered to pets of different sizes.

Breathing life into a future startup

“His lab’s research on gas storage was fascinating to me; there are so many big problems to be solved. Dr. Wilmer gives his students a lot of freedom to decide their own projects, and he has experience starting companies,” Dubé said. “Dr. Wilmer played a big role in turning this idea into an actual product.”

Dubé worked with Wilmer, who would become another co-founder of Aeronics, to further develop making oxygen storage easier.

“Blake is amazing; he’s a superstar, he’s friendly and organized. Aeronics is punching well above its weight from its earliest days,” said Wilmer, who was featured in Forbes’ 30 Under 30 list in 2012. Wilmer also previously led startup business efforts during his graduate studies, resulting in his own spinout, NuMat Technologies.

The team worked with Pitt’s Innovation Institute to accelerate their ideas through the commercial pipeline. Aeronics entered various competitions at Pitt while still focusing on human health. The team won the Michael G. Wells Healthcare Competition, the Kuzneski Innovation Cup and the Pitt Innovation Challenge (PInCh).

“Blake saw the opportunity, learned everything he could through our programs and then launched his startup upon graduation,” said Babs Carryer, director of the Big Idea Center, part of the Innovation Institute. “I highly applaud them for their accomplishments and I thank them for giving back every semester and every year to students to inspire and support them in their own entrepreneurial journeys.”

“Early on, when Blake joined my lab, I felt like I was helpful to him by lending my entrepreneurial experience. But, the more I got to know Blake, the more I realized he probably would have been successful no matter what I said,” Wilmer said. “It’s more of the case of I was just lucky he dropped into my lab.”

Upon graduation, Dubé had a job offer from the multinational chemical company, BASF Corporation. He’d completed an internship there, which he said was great experience. However, he turned down the offer to focus more on the “rare opportunity” with Aeronics.

“We were young, able to take risks and had momentum with an exciting new technology. I knew that I had to see it through,” he said.

Dubé’s advice to aspiring entrepreneurs in college is to do more than just classwork, proactively find resources and find a team of like-minded individuals to work with.

“Pitt played a huge part in getting us started and giving us the right environment and support to start our company,” he said.