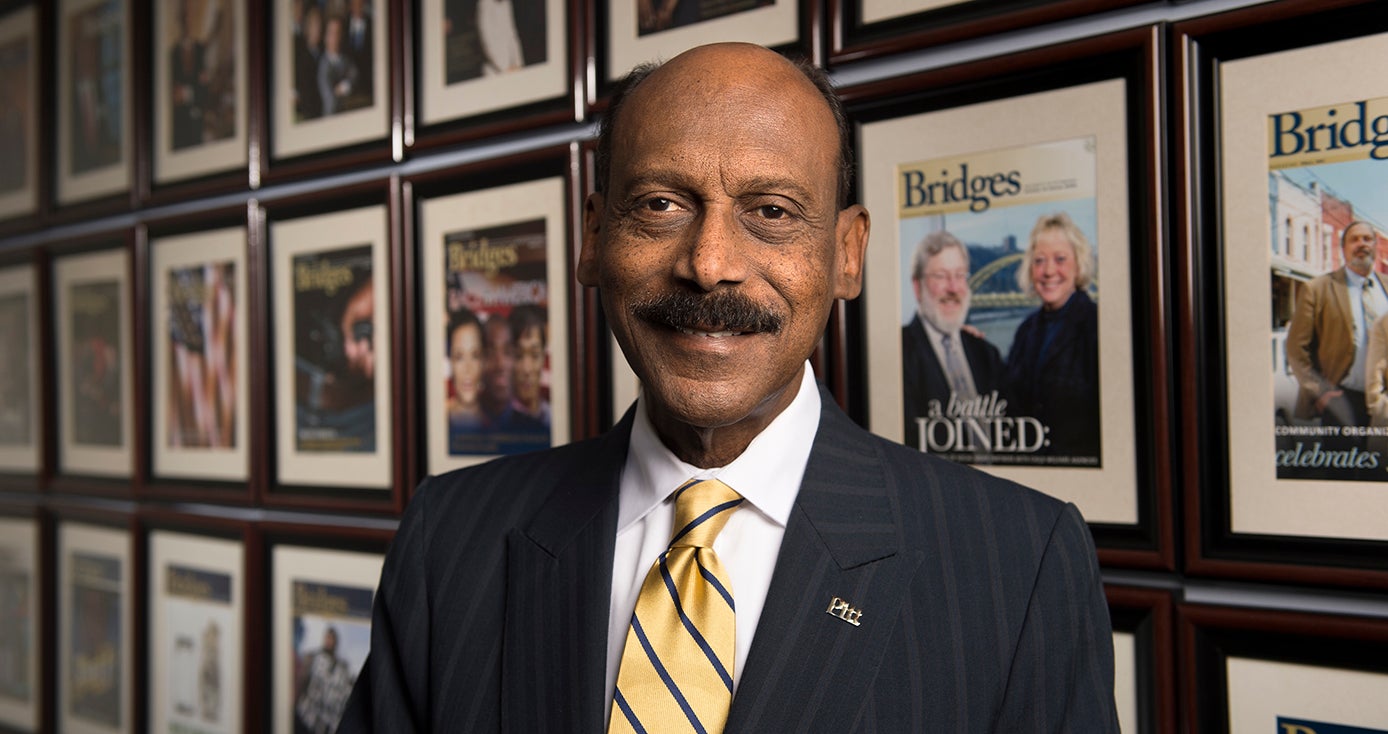 The University of Pittsburgh community is mourning the passing of Larry E. Davis, dean of Pitt’s School of Social Work from 2001-2018 and founding director of its Center on Race and Social Problems. Davis died on March 30.
Watch one of Davis' most recent lectures, titled "Will Race Always Matter?" and read the summer 2018 issue of Bridges magazine, which celebrated Davis' achievements and retirement.

When Davis arrived at Pitt in 2001, he was already recognized as a leading scholar of the narrative about race in America and its role in social justice. In his extensively published research, he explored such concepts as “the psychological majority” and “the racial tipping point,” which are critical to anticipating, understanding and constructively managing the impact of race on the dynamics of group interaction in a wide range of settings, including neighborhoods, schools and the workplace.

Under his leadership, the School of Social Work was ranked among the country’s top 10 social work schools by U.S. News & World Report. He recruited faculty members with wide-ranging specialties, made the school’s doctoral program more rigorous and gained a reputation for being the kind of leader who helped others be successful.

Davis created Pitt’s Center for Race and Social Problems, the first such center to be created at any American school of social work. Its scholars conduct and disseminate applied social-science research on race, color and ethnicity and mentor emerging scholars on race-related social problems. Through its programming, the center regularly exposes community leaders to the most current research relating to race.

One example is 2010’s “Race in America” conference, which brought 1,300 scholars, researchers, students, leaders of industry, public officials, community leaders and others to Pitt’s campus to grapple with the problems of race and inequality that exist in America today.

Members of Pitt’s community shared their feelings about Davis and his many contributions this way:

Chancellor Patrick Gallagher: “Larry was a remarkable leader and scholar. He took on society’s toughest challenges and worked tirelessly to realize a better, fairer world. He leaves us with an enduring legacy that inspires us to do better. On behalf of the extended University of Pittsburgh community, I extend my deepest condolences to Larry’s wife, Kim; his sons; and his many loved ones during this difficult time.”

Provost and Senior Vice Chancellor Ann E. Cudd: “Larry Davis profoundly changed the University of Pittsburgh through his leadership as the dean of the School of Social Work and in founding the Center on Race and Social Problems. He transformed national and international conversations about race—and with it facilitated groundbreaking research efforts. He was always ahead of a very steep curve—one that we grapple with—but also have great hope for as we look toward the equitable future he worked toward."

Senior Vice Chancellor for Engagement and Secretary of the Board of Trustees Kathy Humphrey: “Larry Davis dedicated his life’s work to providing a better understanding of race relations in this country. Larry was a change agent who led the charge to improve the quality of life for all and he was instrumental in raising a generation of thought leaders who would speak truth to justice and continue the work of creating a more equitable society. Larry had a spirit of hospitality that was unmatched and he was always willing to reach out in support of my work and others. His commitment to the work was only paralleled by his commitment to his family—he was so proud of his sons, and eternally grateful for his beloved wife. And for all of these reasons I am grateful to have known him, worked alongside him and more importantly laughed with him.”

Vice Provost for Faculty Diversity and Development and David E. Epperson Chair and Professor in the School of Social Work John M. Wallace: “In addition to being a tremendous leader, Dean Davis was also a role model and mentor to faculty here at Pitt and around that nation. He will be sorely missed.”

Vice Chancellor and Chief Diversity Officer Clyde Wilson Pickett: “Larry Davis was an icon and champion in the fight to advance social justice and civil rights. He will long be remembered for his research, leadership and commitment to progress race relations in this country. I am a direct beneficiary of his counsel and will forever be grateful for the time he invested in me and in the next generation of leaders who continue this work. He leaves not only a legacy in the academy, but a lasting impact on communities all around this country.”

School of Social Work Dean Betsy Farmer: “Dean Davis was clearly a larger-than-life figure who led this school and the field in ways that brought together his personal experiences with his keen ability to think deeply and profoundly. His life and work had an incredible impact on so many people, and it is a true loss not only to his family, the University of Pittsburgh and the School of Social Work, but to all of the scholars and community leaders whom he has inspired with his work that was dedicated to challenging racism in our society. He was a mentor to many young academics over the years and has inspired the work of others throughout his career.”

Chancellor Emeritus and Director of Pitt’s Dick Thornburgh Forum for Law and Public Policy Mark A. Nordenberg: “Dr. Davis’ academic life has been dedicated to the creation of solution-based dialogues that promote a more racially equitable society. He had an uncommon ability to present what might otherwise be viewed as divisive issues in an inviting way—as shared problems whose resolution will benefit the collective good and advance the interests of all people.”

Provost Emeritus and Distinguished Service Professor of Physics Emeritus James V. Maher: “Larry Davis profoundly influenced the development and impact of the School of Social Work at the University of Pittsburgh. He recognized that our people could not hope to have individual contact with all the needy people of the world, and set out to help all those needy people by making Pitt the source of research-grounded helping strategies and research-trained experts to take our messages to the faculties of all the world’s schools of social work. He made our social work PhD program one of the country’s leaders and, especially through his founding and leading of our Center for Race and Social Problems, engaged our faculty, our PhD students and researchers from other Pitt schools in crucial research on the social problems that beset America. In all these Pitt-based activities, he never forgot that our home is in Pittsburgh, and he tailored many of his research activities to benefit the people of this region.”

Emeritus Trustee and President and CEO of Manchester Bidwell Corporation Bill Strickland (A&S ’70): “As a Pitt trustee, I was asked by Chancellor Nordenberg to persuade Dr. Larry Davis to come to Pitt and he often said it was the best decision he made in his career. He literally put the School of Social Work on the national map. As an emeritus trustee, I take great pride in that accomplishment.”