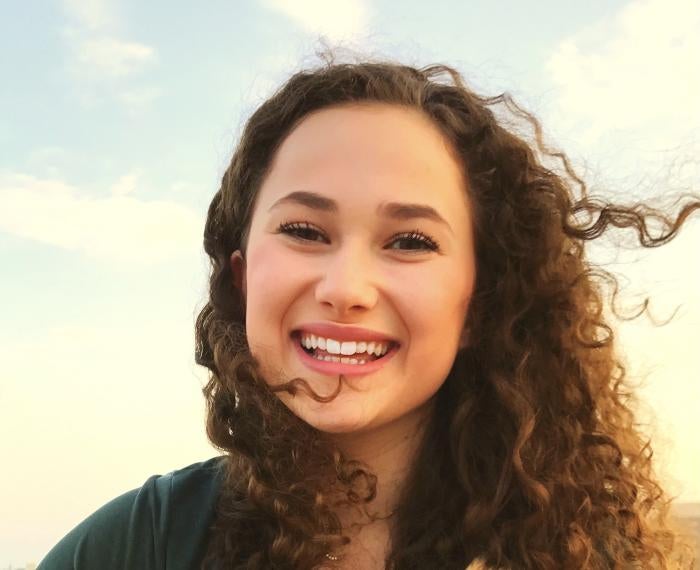 Throughout history, refugees have been used as scapegoats during epidemics.

During and after the Black Death, for example, Jewish people were blamed, shunned and terrorized in their communities. Researching why and how governments use particular groups as scapegoats in unstable times is one of the many projects that Dalya Berkowitz has worked on with Pitt associate professor Burcu Savun. The results of this work will be published in a forthcoming edition of the journal Perspectives on Politics.

Berkowitz, who is entering her senior year at Pitt this fall, is double majoring in political science and psychology with a minor in French. Last year, she became a research assistant for Savun in the Department of Political Science. “She took initiative and reached out to me,” Savun said. “I was very pleased to hear an undergraduate student excited about research.”

Berkowitz has worked on several projects with Savun in the realm of international affairs, mainly helping the professor search for case studies and evidence for research in her areas of expertise, which include civil wars, terrorism, conflict resolution and forced migration.

“She’s very impressive, she always delivered before the deadline and did exactly what I asked for,” said Savun, who is also the director of graduate studies in the department.

This kind of close mentorship is a mark of a Pitt education in the Kenneth P. Dietrich School of Arts and Sciences and beyond. And Berkowitz returns the praise for her professor: “She’s an amazing mentor to me, she’s so willing to talk me through options and about what path is best for me.”

In part due to her research experience, this summer, Berkowitz is interning at The Fund for American Studies (TFAS), specifically with its International Foundation for Electoral Systems in Washington D.C., while also taking classes at George Mason University. TFAS seeks to share the principles of limited government and free markets with future leaders.

Berkowitz found the program through one of Pitt’s career fairs. “It sounded really exciting because it’s not just an internship. There are classes and speakers and living in D.C. It’s an action-packed program,” she said. However, while weighing whether to join, Berkowitz ran into financial barriers. She was able to secure funding through TFAS’s Leadership Scholars Program, which supports applicants who show talent in academics and extracurriculars and exhibit financial need.

Her days in D.C. this summer are busy. Berkowitz works at her internship during the day and takes classes three days a week in the evening, along with attending several speaker events throughout the week. At TFAS, Berkowitz said she does “a little bit of everything. I do a lot of writing, attending meetings and taking minutes, helping out where I can.”

One thing Berkowitz said she enjoys about her internship is the environment. “I’m surrounded by people who are working in the field that I want to work in and meeting so many accomplished people. You can see the effect that this organization has around the world — sustainable and real changes.”

Going into her senior year, Berkowitz will be taking a graduate-level research course with Savun and said she is planning to apply to graduate schools for policy analysis.

Berkowitz cites both the internship and mentorship experiences in helping her narrow down potential options for her future career. “I get to see so many sides of the field, and it has helped me decide that international relations is what I want to pursue.”

She added, “I wouldn’t be here without the research I’ve done.”

This story was written by Kendal Johnson, a student reporter for Pittwire. Are you participating in an interesting or impactful internship this summer? Tell us about it: pittwire [at] pitt.edu.