Horror Studies Group Focuses on the Impact of Women Horror films evoke much more than terror and blood-curdling screams. Audiences have long been leaving theaters with societal, cultural and even political commentary to consider. And this March, Pitt’s Horror Studies Working Group, a clearinghouse for the many Pitt initiatives related to horror, is focused on the ways women have changed the genre.

Sonia Lupher (A&S ’20G) is a visiting lecturer in film and media studies  in the Kenneth P. Dietrich School of Arts and Sciences and a key player in the working group. In 2018, she founded Cut-Throat Women, an expansive database of women who make horror. 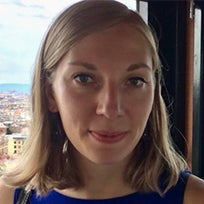 She saw a list of 50 names grow to a database of thousands from all over the globe. While it is mostly made up of names of directors, there are women cinematographers and even composers who have been contacting Lupher, asking to be included.

And though genre giants like George Romero, Wes Craven or Jordan Peele loom large in the public imagination, as the Cut-Throat database shows, horror is no longer solely the turf for white male actors, directors and filmmakers.

“Women are behind the camera more often, rather than just in front,” said Adam Lowenstein, professor of film studies and director of the Pitt working group. “Things are changing in a way that feels remarkable and noteworthy and we’re tapping into that moment.”

Lowenstein cites the 2014 Australian horror film “The Babadook,” directed by Jennifer Kent. In the film, a single mother struggles with the death of her husband and her son’s fear of a monster in their house. “The horror in that film is not being up against a monster but being a single mom and what that struggle is all about,” Lowenstein said. 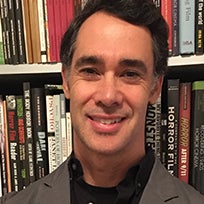 He also notes that in literature, it was women who were responsible for significant novels in the gothic tradition that gave birth to horror. He cites Mary Shelley’s “Frankenstein” and Emily Brontë’s “Wuthering Heights.”

With film, he said that, rather than be a silencing feature, horror can “be a megaphone for people that gives them a voice.” Women and the LGBTQ community have all understood horror as a means of expressing themselves.

“Women have seen these films and recognized themselves on the screen,” Lupher said. “Then they turned to filmmaking and we get to see these aspects become more explicit.”

According to Lupher, while a lot of women love George Romero’s classic “Night of the Living Dead,” they prefer Romero’s later films that bring female characters to the fore, such as scientist Sarah Bowman, the lead in “Day of the Dead.”

“She is a badass in charge in a way that Barbra from ‘Night of the Living Dead’ is not at all,” she said.

Pitt’s horror backers all agree that there is a newfound respect for the genre and what it can accomplish. They point to 2017 films like “Get Out,” which won an Academy Award for Best Screenplay, and “The Shape of Water,” which nabbed four Oscars, including Best Picture and Best Director.

And they stress that “horror” doesn’t just mean film. It can reach into such disciplines as sociology, psychology, cultural studies, philosophy, art history and even religion.

“It is a big enough tent that you don’t have to be a horror expert or horror fan to enjoy and learn from what we are doing,” said Lowenstein. “We welcome people from all backgrounds, areas of expertise and entertainment preferences.”

The fact that Pitt has become the hub for this work is what they find especially exciting. Lupher said it’s the only academic horror studies initiative underway at any university at this level.

She added: “There are little pockets of horror and scholarly work at certain universities, but they don’t have our resources.”

The scholarly study of horror is alive and well at Pitt in these various initiatives, all linked to the overall Horror Studies Working Group:

The George A. Romero Archival Collection, acquired by the University Library System in 2019, is a unique and comprehensive portrait of a filmmaking pioneer. The collection forms the foundation of a larger Horror Studies Archive that comprises materials from other horror and science fiction authors and filmmakers.

The Horror Genre as a Social Force Scholarly Community was established in late 2020 by the University Honors College as a way for faculty and students from various disciplines to discuss what the genre has to say about politics, society, art and culture.

The recently formed Global Horror Studies Archival and Research Network aims to study the genre through a global lens, as nearly every country has its own culturally specific horror traditions, often influenced by global developments. It was developed with a Global Academic Partnership grant to Lowenstein from Pitt’s Global Studies Center.

The George A. Romero Foundation, while not part of Pitt, is an invaluable partner on all projects at Pitt related to horror. It honors Romero’s works and his influence and supports a new generation of filmmakers inspired by his legacy.

It is a goal of Pitt and the Romero Foundation to eventually build a Pitt-based  George A. Romero Horror Studies Center that would contribute to horror-related research by scholars and students alike that spans many disciplines and countries of origin. The center would also be a foundation for teaching and community engagement.