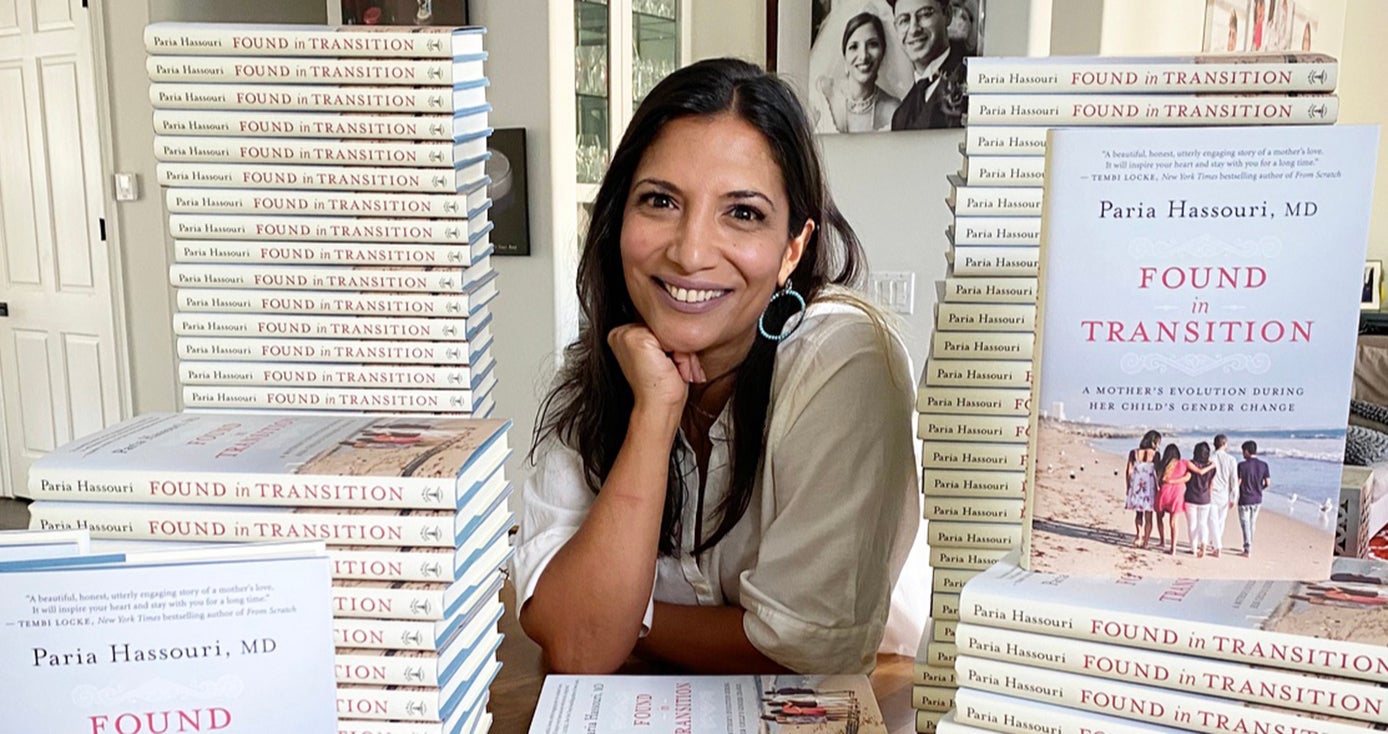 Pitt alumna Paria Hassouri (A&S ’94, MED ’99) is a pediatrician, mother of three and transgender rights activist. She started a pediatric and adolescent gender wellness clinic at Cedars Sinai in Los Angeles, where she lives and practices. Her essays have been published in multiple media outlets including the New York Times, Washington Post, Los Angeles Times and the Huffington Post, and she has presented stories on stage through Expressing Motherhood. She spent her formative years in Pittsburgh. Hassouri completed both her undergraduate and medical school studies at Pitt, where she met her husband, Babak Dadvand (MED ’99).

The following is an excerpt from the book “Found in Transition.” ©2020 Paria Hassouri. Printed with permission from New World Library.

I looked at my reflection in the mirror, trying to see if I still recognized myself. “You can handle this—it’s just another day,” I tried to convince the eyes staring back at me from the mirror. Did my eyes still sing and dance with joy, as my late Aunt Shaheen had once said they did? She had been holding my face in between her hands, locking eyes with me in an airport after six years apart. I can still feel her palms on my cheeks.

My dark brown eyes maintained their pain and worry, but I looked away. What had been scheduled months in advance seemed to have suddenly snuck up on me. It was May 2, 2018, the day of our first appointment at the Center for Transyouth Health and Development at the Children’s Hospital of Los Angeles, just less than a year since that first call in Thailand, to discuss Ava’s medical transition. I wasn’t ready, but I knew I might never be. I had to remind myself that what mattered was not my readiness but Ava’s body, which was getting more masculinized each day by testosterone that had no respect for anyone’s timeline.

Although Babak had taken Ava to only one of her therapy appointments with Dr. Stern, leaving me to handle the rest, he had taken the afternoon off from work for this one. He wanted to be there for [our child], and for me, and I knew that I would not be able to relay all the information without recording it, or even worse, having him on a speakerphone the whole time. In my own pediatric practice, this is one of my greatest pet peeves. I end up having to repeat half the conversation to the parent on the phone. They can’t read my facial expressions, and they can’t observe my exam. I was certainly not going to put another physician through that. If you don’t think the other parent can reliably relay what transpires at an appointment, then you should be there yourself. I signed Ava out of school early; Babak drove.

We drove mostly in silence. The distance, seven miles, takes about 45 minutes in LA traffic. Children’s Hospital is almost directly across from the Kaiser Permanente hospital on Sunset Boulevard where I gave birth to Shayda [Ava’s sister], and the drive took me back to that time almost 12 years earlier.

When we moved to Los Angeles, after two years in Indianapolis while Babak completed a plastic surgery fellowship, I was seven months pregnant with Shayda. Seven years after getting married, I was pregnant with my third and last child, a girl, and living in Los Angeles within a couple miles of my aunt’s old condominium. All my plans had panned out, check, check, check. I joked that my daughter had been waiting to be born in Hollywood, not in Cleveland like the boys. Although my ultrasound in Indianapolis had confirmed that I was having a girl, a little part of me still worried that the baby was a boy, the penis just tucked and not visible in the image. When I went to my first prenatal appointment at Kaiser Sunset, the obstetrician said, “I’m going to order an ultrasound. We like to have our own ultrasounds on record.” I felt relief when this ultrasound confirmed that there was no penis or testicles in sight.

When my contractions started, 10 days before my due date, at first I wasn’t sure if it was labor. My first two labors had been induced at forty weeks, so no one was expecting Shayda to arrive a little early. As we drove along Sunset, with me writhing in pain and now 100 percent sure this was labor, I was excited that I was finally going to be a mother to a daughter.

As it turned out, Shayda was born by emergency C-section. I had started bleeding from a placental abruption (a complication in which the placenta separates early from the uterus), and the baby’s heart rate had been undetectable. The anesthesiologist had completely knocked me out for the surgery. The first incision was made at 10:02 a.m.; Shayda was out at 10:03 a.m. A couple of hours later, when I was waking up from anesthesia, before I could even open my eyes, I heard Babak’s voice beside me and muttered, “It’s a girl, right?”

Now, as we parked just across from Kaiser, it felt like going to some sort of prenatal or birth appointment for Ava. Once again I blamed myself for my stupidity in caring about whether I had boys or girls. We were going to talk about blocking her body’s testosterone and starting her on estrogen. Was Ava actually my first girl, or was Shayda my first girl? I thought of Shayda as my first daughter, but would there come a day when that narrative would finally change in my mind, when I would think of Ava as my first? Did it matter? Would Shayda’s story and history change because of Ava? And what if it did?

Shayda was born on my late Aunt Shaheen’s birthday. She was the aunt I was closest to growing up, the aunt whose unexpected early death had made me realize on my runs that I needed to live my life to the fullest and start taking risks — check everything off my bucket list. She was the aunt whose death had made me want to never visit Iran again, afraid that I’d step off the plane and not be able to breathe when I didn’t see her eyes scanning the passengers for me. She’d had two boys and then a girl. I got pregnant with Shayda about a year after her death.

Shayda’s early arrival on Shaheen’s birthday had felt like a gift and a sign from the universe, from my aunt, finally making me a mother to a daughter. I’d spent a lifetime creating different narratives and stories like this. Now, all the stories that I’d concocted were being questioned, but did any of it matter? Stories are made up. They can be re- written. The ending could be happy or sad, depending on the spin I chose to put on it. I could rewrite these stories, or I could stop giving them so much power.