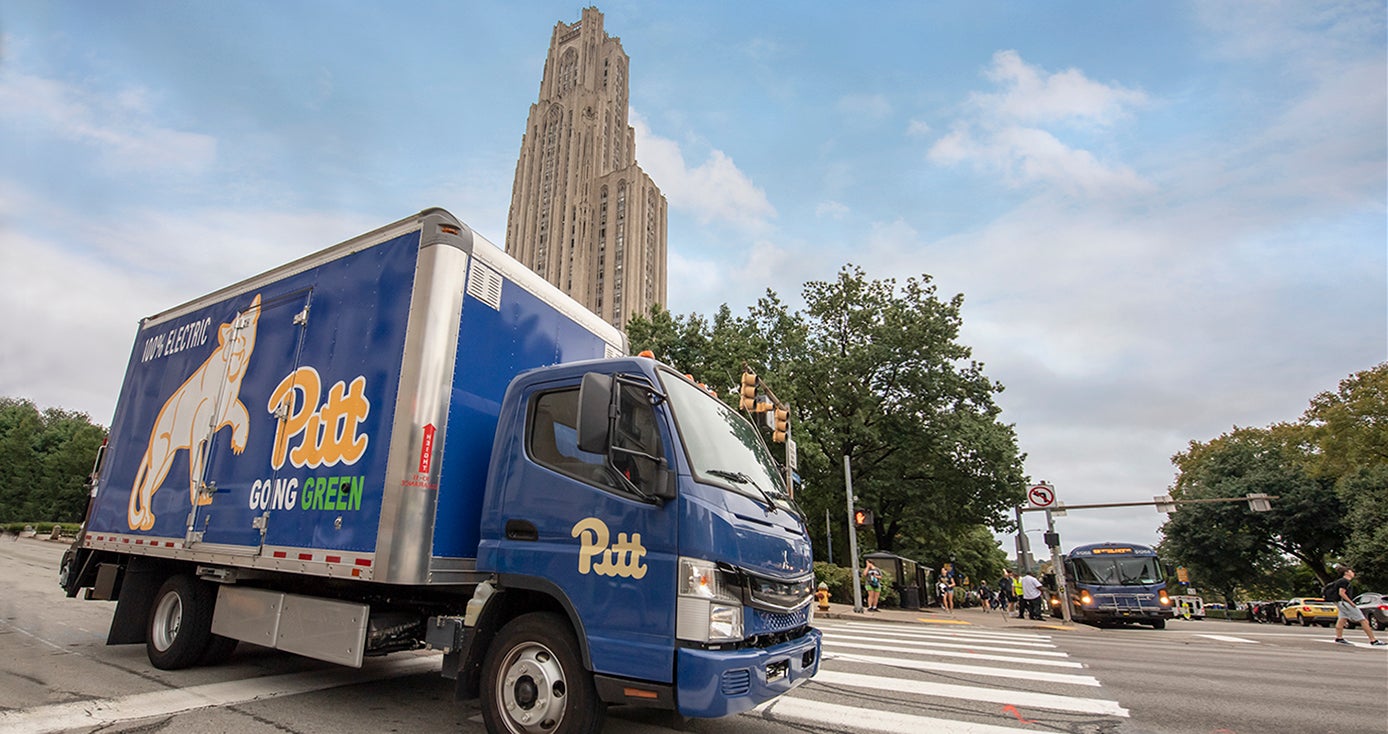 Pitt is driving toward its greenhouse gas reduction goals with the addition of new zero-emission electric vehicles to its fleet.

Four diesel box trucks used by Pitt’s Central Receiving Office for campus moving and delivery services have been replaced with Mitsubishi Fuso vehicles that can travel 60-80 miles on a single charge.

These trucks are not only cleaner, they’re also quieter than their predecessors. And they’re among just a handful of their kind in North America. Launched in 2017, the Mitsubishi Fuso eCanter is billed as the world’s first all-electric light-duty truck in series production.

The University’s vehicles are among the first wave of 500 trucks delivered worldwide, according to a company spokesperson. While most of the initial deliveries in the U.S. went to New York or California, five were delivered to the Pittsburgh area — four to Pitt and the fifth to UPS.

These vehicles will further Pitt’s progress toward energy and emissions reductions specified in the 2018 Pitt Sustainability Plan.

Converting to electric vehicles — and using renewable energy for charging them — eliminates these pollutants at their source.

The trucks are recharged at Central Receiving using a pair of energy-efficient chargers that can provide 25 miles of travel for each hour of charging time, or 25 RPH (range per hour.) A $7,000 grant from The New American Road Trip, a nationwide electric vehicle tour across America, helped support the installation of the charging stations.

Jeff Woodall and Oscar Schneider are among the drivers from Central Receiving who are behind the wheel of these new vehicles. They typically drive more than 40 miles in the course of a day, transporting mail, lab supplies, surplus property, library books or whatever needs moving around Pitt’s urban campus.

Aside from the quiet operation — the trucks roll silently with no engine noise — they’ve noticed little difference between these and conventional trucks.

“There’s zero difference in power, even up the steep hills,” said Woodall.

“I was amazed,” said Schneider, who initially was skeptical about the battery-powered vehicles’ ability to handle heavy loads, such as 1,000-pound tanks of gases they transport to University labs.

It’s been no problem. At the end of the day, he typically has one-half to one-quarter of a charge remaining, he said.

Only after the trucks were emblazoned with “Pitt going green,” “100% electric,” and “Reducing our carbon pawprint one delivery at a time,” and wrapped in bright blue with a panther outlined in gold did they spark curiosity on campus.

Now, answering questions is all part of the day’s work for the drivers: “How do they run?” “How long do the batteries last?” “Where do they plug in?”

Theirs is one more contribution to the culture of sustainability that’s continuing to grow campus-wide.

Said Kevin Sheehy, assistant vice chancellor of auxiliary operations and finance, “Parking, Transportation and Services prides itself on the many ways we can engage with the community and align the University’s commitment to follow core sustainability principles to lessen our environmental impact, ensure a healthy community and contribute to global solutions.

“The department is focused on creating an environment through our wide array of services and programs to best serve the university community, while also making it sustainable.”

Off to a sustainable start

The start of the fall term at Pitt marks some new and expanded sustainability efforts, including a unique partnership with the Healthy Ride bikeshare program. A pilot program underwritten by Pitt’s Office of Sustainability is providing first-year Pitt students and resident advisors (RAs) with unlimited free 30-minute rides during fall and spring term.

The bikeshare benefit is part of a broader effort to introduce new students on campus to Pitt’s longstanding culture of sustainability. In support of the Pitt Sustainability Plan goal to serve 50% of to-go meals and beverages in reusable containers by 2025, first-year students in Pitt’s residence halls received a reusable mug and a token for a reusable takeout container, plus a set of reusable cutlery to reduce waste from non-recyclable plastic.

Pitt’s BYO(Mug) program offers discounted drinks to those who bring their own mug to Campus Bean Scene coffee carts. The Choose to Reuse program aims to eliminate some of the 235,000 single-use takeout containers used on campus each month. Diners use a token to receive their take-out meal in a reusable container at select on-campus dining locations, then return it in exchange for a new token at OZZI Choose to Reuse machines.

All this sustainable swag came tucked into a reusable shopping bag. To discourage waste from single-use plastic bags, campus dining and retail locations charge 25 cents for a plastic bag. The BYO(Bag) fee supports Pitt’s Green Fund, which provides grants for student-initiated sustainability projects. Since its inception in 2014, BYO(Bag) has reduced the use of single-use plastic bags by 95 percent, saving more than 1.4 million bags.