“I thought I had everything in order when I came home from spring break,” said Taylor Smith, who just finished her sophomore year as a neuroscience major at Pitt.

She’d returned to Pittsburgh in mid-March after spending time with her family in New Jersey.

The 20-year-old had just learned that she’d landed one of only 48 spots in the School of Health and Rehabilitation Sciences (SHRS) undergraduate Emergency Medicine (EM) program—an important step in her quest to become a doctor, and the reason she chose Pitt.

In pursuit of her medical career, she’d lined up part-time jobs at nearby UPMC Presbyterian hospital and at a local ambulance company.

And in pursuit of her passion for music, she’d practiced five nights a week all semester to nail her vocals as a lead in the Department of Theatre Arts’ spring musical, “Head Over Heels.”

The spring musical was postponed until fall.

The pandemic became more than a headline.

“Before we left for break, I was nervous, but it didn’t feel real to me. It was just a story in the news,” she said. “The transition to online classes was a big shock. That’s when it felt real.”

And then the Federal Emergency Management Agency (FEMA) called.

After only a week on the job, Smith was asked to go. Her hospital job plans were put on hold.

She had assisted emergency medical technicians (EMTs) and medics on ambulance calls since age 16 back home in New Jersey, and worked as an EMT there during school breaks after earning her own EMT certification during her first semester at Pitt.

So she and seven other EMTs from her company were among hundreds of personnel called to assist overwhelmed first responders in metro New York—the U.S. region hardest hit by the pandemic.

Corey Flynn, of the SHRS Department of Physical Therapy, mentored Smith in a 2019 internship through the David Berg Center for Ethics and Leadership in the Joseph M. Katz Graduate School of Business and College of Business Administration, helping to map food assets in Pittsburgh’s Oakland neighborhood.

“We were all so excited for Taylor when she got into the EM program at SHRS. She wanted it so badly. It’s not an easy program to get into,” she said.

“The day after I found out she got into EM, she emailed that she had been called to New York to work under FEMA for her ambulance company. I went from elation to dread. Here is this amazing young woman going into one of the hardest hit areas, face to face with a deadly virus,” Flynn said.

“My husband’s response when he found me with tears running down my face from concern for her was: ‘This is her generation’s war and it’s going to make her a better doctor,’” she said.

The scene in the city

Smith and her boyfriend, Michael Riederer (A&S ’20), a fellow Pitt student and EMT with the company, finished their spring term deployed in New York and New Jersey alongside other ambulance crews, critical care nurses and physicians who were housed together in an Embassy Suites hotel in New Jersey.

Their team was deployed for more than two weeks in Manhattan and in Newark, New Jersey, responding to 911 calls and assisting with triage in hospitals.

At first, teams worked grueling 24-hour shifts, with 12 hours off. Then, to avoid burnout, they were assigned to 12 hours on, 12 hours off, Smith said. “It was very stressful.”

Local responders were grateful for the assistance. “They were so excited to have us there. They were overrun,” she said. “Any ambulance company tries to get to a call within six minutes, but they were 20 or 30 calls behind.” That meant hours-long waits for help. “People were being told to get themselves to the hospital if they could,” she said.

And there were long waits at the hospitals as well. Accident victims are a priority, but one teenage car crash victim Smith transported waited 40 minutes to be seen in the emergency room, she said.

“I’ve never seen hospitals so full,” Smith said. “You could tell the staff were really tired, too.”

About 40% of the calls she responded to were COVID-19 patients, “People who had it or who thought they might,” she said.

Smith was shocked when she encountered her first: A woman in her 50s who insisted she did not want to go to the hospital. “She looked perfectly fine and she had good vitals,” Smith said. “But her kids all said she needed to go.”

When the woman got up from the sofa to sign the refusal papers, her oxygen levels plunged. “She couldn’t breathe and she couldn’t keep walking over to the table,” Smith said.

“She looked perfectly fine one minute, and then not.”

“When people ask ‘Can you help?’ usually my answer is ‘Yes’,” she said. “In any other situation you know there’s a course of action and something to do to help. This was different. There wasn’t anything, except to reassure them I’d get them to the hospital.”

The hospitals have no cure either, she said. “They’re just treating symptoms. They’re discharging whoever they can back home, where it’s safer, and admitting only the sickest.

“I’ve worked 911 calls for a long time. I’m used to blood and car accidents and cardiac arrest,” she said. “Coronavirus was new. It wasn’t especially gory or anything, but there wasn't anything I could do.” 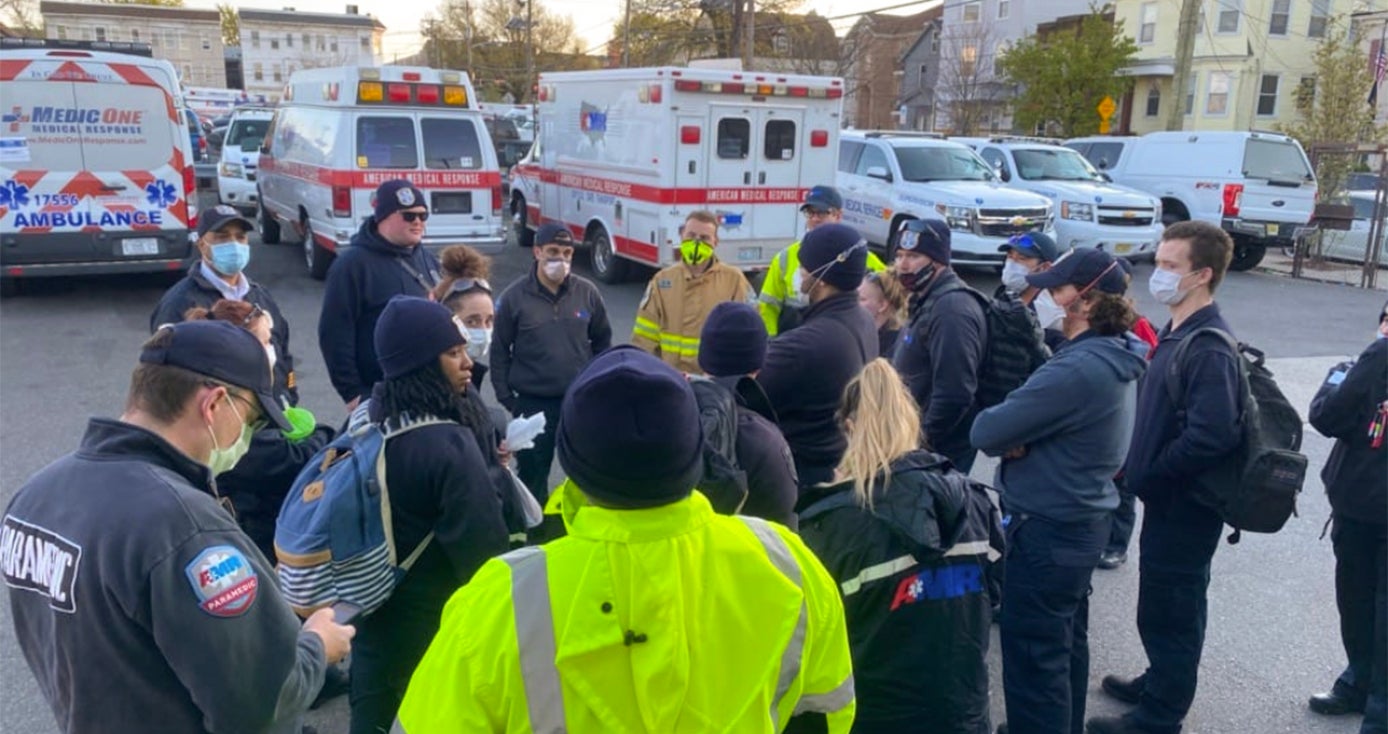 The FEMA crews stuck together and leaned on each other. Smith said she was grateful for the support.

“We were like a makeshift family, with people from all over—Alabama, Kentucky, Florida,” she said.

“This was something that none of us had ever seen before. It was good to be going home with people who’d just seen the same thing,” she said. “We all had each other and we got to know everyone really well.”

At 20, Smith was among the youngest responders. “One other turned 20 while we were there,” she said. “They teased that we were the babies.”

They also looked out for her. They understood when she needed to finish her homework rather than go along for a meal at one of the nearby restaurants that stayed open to serve the FEMA crews.

And they adjusted their schedules to cover for her while she finished her final exams.

She completed the spring term with a 3.9 average.

“I do my best under pressure,” she said.

“Taylor was so happy to be in New York to help. That’s all she wants to do,” said Pitt’s Flynn. “I was happy when she said she was back in Pittsburgh.”

Getting back to normal

As summer unfolds, Riederer, who graduated in April with bachelor’s degrees in neuroscience and history, is heading to Quantico, Virginia, in June as a 2nd Lieutenant in the U.S. Marine Corps.

Smith is back in her Oakland apartment and preparing to start her junior year as an emergency medicine major and chemistry minor.

She has tested negative for COVID-19 and is working two 12-hour shifts at the hospital each week and a 12-hour shift at the ambulance company every other week.

Smith said she’s excited for the opportunity to work alongside doctors and nurses in-hospital for the first time.

“All my medical experience is pre-hospital,” she said. “In the hospital you have everything you need right there. In the ambulance, you’re only working with what you have in the ambulance.”

She’s already learned suturing techniques, and is earning her phlebotomy license as she works in the medical-surgical unit.

She’s already made a short list of about 30 medical schools to apply to.

Her goal is to study in Florida, to be near her uncle who is an orthopedic surgeon.

As she looks back on the spring term and her deployment, “I am really grateful for the experience,” she said. “The opportunity is every pre-med who loves emergency medicine’s dream.”

This year’s National Emergency Medical Services Week, May 17-23, 2020, celebrates the lifesaving work of EMS professionals as they respond to the COVID-19 pandemic in addition to their everyday duties on the front lines of emergency response.

Follow School of Health and Rehabilitation Sciences (SHRS) on Facebook and other social media and use the hashtag #EMSWeek to see spotlights featuring Emergency Medicine (EM) undergraduate program alumni.

As first responders, medical professionals, paramedics and health care leaders, SHRS EM alumni are on the front lines of the pandemic across the country, putting into practice the lifesaving and leadership skills they learned at Pitt.