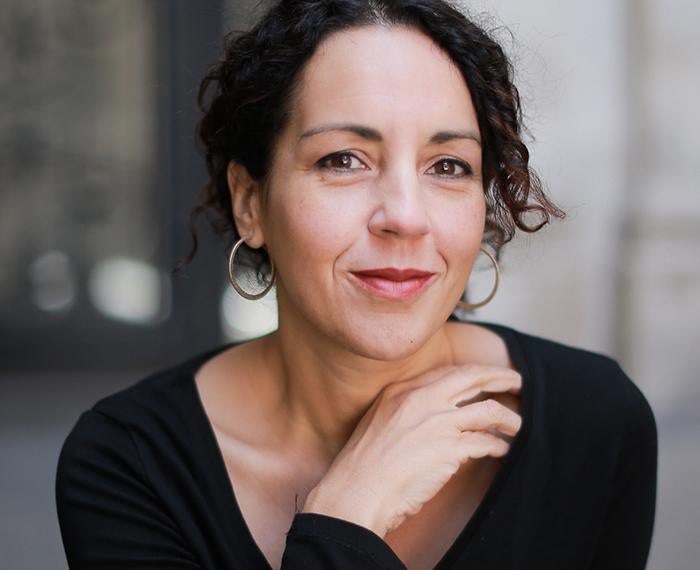 A stranger on a New York subway platform sent Angie Cruz on the journey to her next book.

Cruz, associate professor in the Department of English in the Kenneth P. Dietrich School of Arts and Sciences, was waiting for a subway when her eyes fell on an older woman reading a job training ESL handbook. She reminded Cruz of her aunts, mother and grandmother, all whom were laid off during 2008’s Great Recession.

She wondered what it would be like to start over again without speaking English or grasping technology.

Tell me something about yourself, she thought.

The answer was startling: “I’ll tell you something about myself. I came to this country because my husband wanted to kill me,” she heard.

Cruz wrote those lines down on her phone.

Cara Romero was the name behind the voice. She is 56 years old — stubborn, bossy and unmoored after losing her factory job. Her apartment is in a rapidly gentrifying section of Washington Heights, and she and her neighbors are trying to hold onto their homes.

“It took a minute to trust the voice,” Cruz said. “I’d never had an experience where a character’s voice comes to me so strongly and specifically and kind of leads me through the book.”

She threw her years of training on how to write a novel out the window and chose to listen to the character speaking to her.

In the months following, Cruz continued to connect with the character on her commutes, and by the end of the year, she had written the first draft of “How Not to Drown in a Glass of Water” on her phone.

In “How Not to Drown in a Glass of Water,” Romero’s life story unfurls in a series of monologues delivered over the course of 12 meetings with a senior workforce program job placement counselor. Readers see Romero recount, often in tangents, the mistakes and triumphs that have defined her life and come to terms with how she needs to change.

Each monologue is preceded by an example of bureaucratic morass — Romero’s application for U.S. naturalization, her skills assessment survey and an eviction notice are just some of the documents Cruz used to illustrate the way a person’s rich life experience can be reduced and made efficient for processing.

Ahead of the release of the new book, Pittwire asked Cruz to share how she brings her writing life into the classroom and what led her to write about people not normally represented in American media.

Attend her Sept. 13 book launch at City of Asylum or online at 7 p.m.

Your novels offer glimpses into the lives of people on the margins — they’re informative but never didactic. What goes into achieving that balance?

The truth is, when I’m writing, I don’t think about how I am telling the story of someone unrepresented in the media; it’s my curiosity that leads me to write about the people and situations that no one’s noticing.

It's almost crazy to say I'm trying to do this bigger thing, because really, all I care about is people and what they have to say and who they are. We're complex, right? No one is good or bad, and that's what's exciting. We live this wide continuum of things inside of us

We don’t see women like Cara Romero in the media and in books — women in their 50s, women with strong accents and ESL speakers. That's the work of the writer: to notice these things and persons that most people don't.

As the child of immigrants, did you ever feel pressured to follow a more conventional career path?

I think that having a job with some stability and benefits is incredibly important. My first career after studying visual art at La Guardia High School was in the fashion industry. These two paths seemed very insecure to my family. They wanted me to have stability, and when I said I wanted to become a writer, that choice was even more mysterious for them.

I think this story is common for many artists unless they are born into a family of artists.

How do you empower your students to explore their identity on the page?

I want to teach my students to figure out what is the story they really want to write, not the story they think they should be writing. I want my students to write with curiosity and courage, which requires decolonizing their minds of what they think writing should look like, what’s been done through their previous education. Students should be trusting their creative voice.

We know from reading translated works that there are many ways of telling a story — that's what I want my students to see. I don't want them to be robots that are derivative of something that already exists; I want students to hone in on what they can offer in all their complexity.

What did you learn writing this book?

I really leaned into some of the things I learned about storytelling from the genesis of my writer life, which is my grandmother’s teachings.

As a young person, my original teachers of storytelling were the women in my family, like my grandmother; she's an amazing storyteller.

I wrote a book exploring a totally new form — this felt experimental and risky in some ways because I think that people who read “Dominicana,” my last novel, maybe want the same kind of book, aesthetic-wise. As a writer, what’s exciting for me is always trying to do something new, to challenge myself.

I'm also proud of the fact that I wrote, even when I thought I would quit, and I wrote for myself and that God-awful Cara Romero, even though she's sometimes infuriating. Cara is a character who does not share the same opinions that I do about life, mothering and child-raising.

I think I was able to write Cara in a way that people still love her and root for her because she, despite everything she thinks is right, changes.

I feel like the book has somehow succeeded in allowing certain kinds of conversations that might not have been possible to be imagined.

That's why novels are great because you can create that fiction.

Order “How Not to Drown in a Glass of Water” online or get it at your local bookstore.