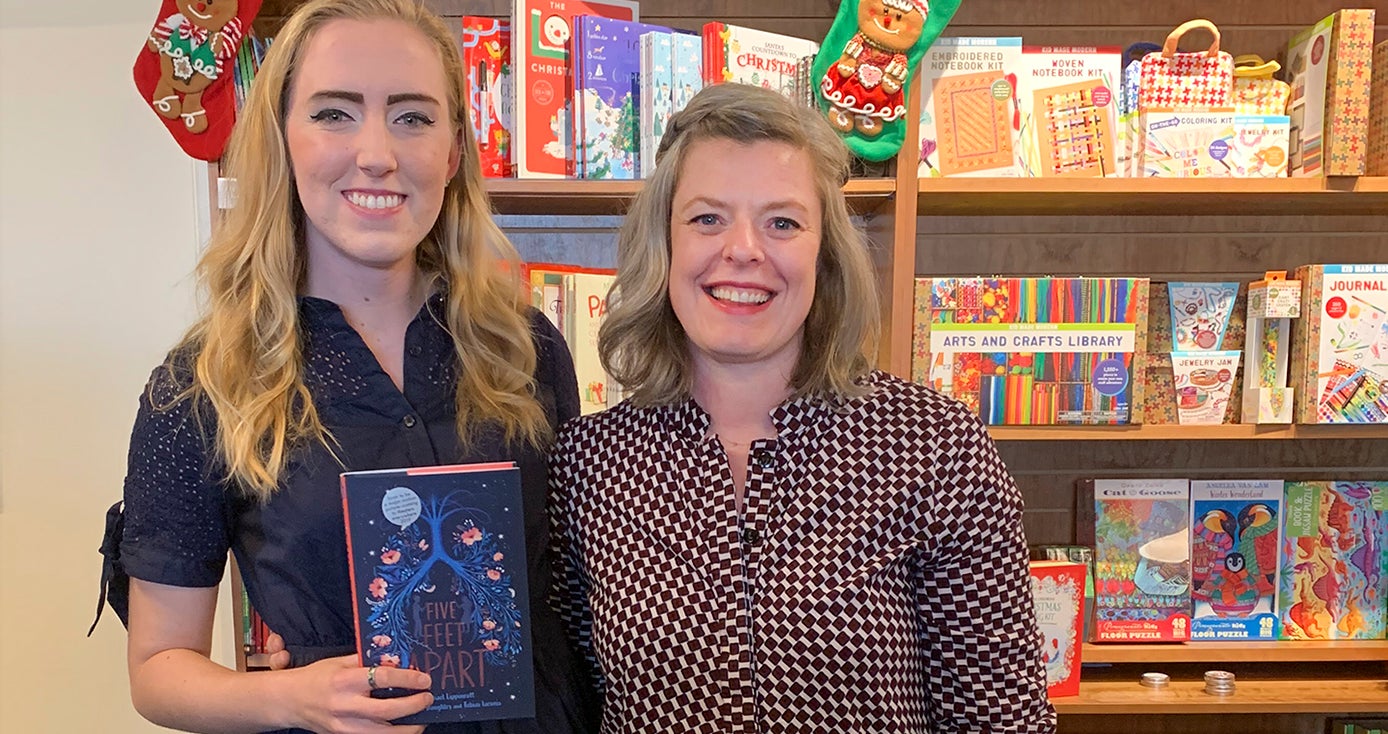 When Rachael Lippincott (A&S ’17) sat down in her Writing Youth Literature class in her sophomore year, she was on track to be a pre-med major.

What she didn’t know was that, in just a few short years, she would graduate from the University of Pittsburgh with a degree from the Writing Program and, within months, become a New York Times best-selling author.

Through all this, Lippincott said, she could not have been the star of her own success story without the support of one devoted professor-turned-mentor and a little serendipity.

The makings of a mentorship

In the fall of 2015, Lippincott decided to enroll in Siobhan Vivian’s Writing Youth Literature course, mainly to fulfill a general education requirement.

“I had an interest in writing before, but I would say I probably wouldn’t have actually listened to what I wanted to do if it weren’t for Siobhan,” said Lippincott.  “After our first class I called my friend and was like, ‘this professor is the coolest person ever.’”

For Vivian, the feeling was mutual.

“To me, Rachael was an immediate standout,” said Vivian, a visiting lecturer in the Department of English. In class, Vivian said, Lippincott would catch her eye because she was “so receptive and present. She came in with an infectious energy.”

Along with teaching two creative writing courses at Pitt, Vivian is a New York Times best-selling and international best-selling young adult author and editor, bringing real-world expertise to the creative process. Her most recent novels include the critically acclaimed “Stay Sweet,” published in April 2018, and the internationally published “The Last Boy and Girl in the World.”

In her classes, Vivian hosts writing workshops for her students, where she came to learn Lippincott’s natural voice as a writer, finding her work “incredibly funny.”

“I take workshop very seriously. Oftentimes, the professor lets students drive the conversation. I do the opposite,” said Vivian. “I like to push them. It’s a lot of cheerleading, a lot of brainstorming.”

Fueled by Vivian’s encouragement, Lippincott enrolled in another writing course taught by Vivian, served as her teaching assistant and changed her major. Along the way, while spending many days together in the Cathedral of Learning on the Pittsburgh campus, the duo found that they shared a similar sense of humor and vowed to keep in touch after Lippincott graduated.

The most important draft of her life

Shortly after Lippincott graduated in December 2017, Vivian received an email from the Simon and Schuster publishing company, inquiring if she would recommend any writers to pen a young adult novel based on a screenplay titled “Five Feet Apart,” written by Mikki Daughtry and Tobias Iaconis.

The screenplay focused on a love story of two teenagers diagnosed with cystic fibrosis – a terminal disease. Vivian said she was told that the author would have freedom to develop the story in his or her own voice. “I knew the book was going to be Rachael’s,” said Vivian. “I knew this piece would have humor and heart. It’s a balance Rachael does very well.”

After Lippincott agreed to “audition” for the project, she wrote the first chapter of the book to present to the editors, with other authors in the running.

“I thought, in my mind, we are getting her this job. This is hers. Let’s knock it out of the park,” Vivian said.

Vivian provided her usual constructive feedback on Lippincott's draft. “I availed myself immediately when Rachael started writing to talk through the piece. I gave her notes on her sample the same way I would in one of our workshops. I wanted her to feel like she wasn’t doing this alone.”

A week later, Lippincott got the job.

From taking Vivian’s classes, Lippincott said knew she had the stamina to churn out 3,000 words in less than eight hours. “I knew how quickly I could write under pressure if I had to, and also knew what makes a good story,” Lippincott said. “Siobhan definitely taught me the importance of a first chapter, the opening and how to keep people engaged.” After a whirlwind five-month process, the novel hit the shelves in November 2018.

The first week of the book’s publication, Lippincott received a phone call from her editor that her book had made it onto the New York Times Best Seller’s list.

Lippincott recounted, “The next person after my editor to call me was Siobhan. She was like, ‘I’m leaking happy tears!’”

With Lippincott’s success, the women have recognized that their relationship has undergone a transformation. “She is my peer. She’s not my student anymore. We are both doing the same job,” said Vivian.

Still, Lippincott relies on Vivian for advice on new projects. “Siobhan’s opinion is the most important for me when it comes to my writing,” Lippincott said.  “She’s good at pitching ideas and helping flesh out a story to make it the best it can be. During my time at Pitt, that was the most valuable thing.”

For Vivian, she finds gratitude in mentoring emerging writers. “Why would I not want to share my experience and the things I’ve learned to someone who has just started out? I cannot imagine wanting to withhold something like that,” she said. “To be able to pay back the kindness people have paid to me over the years is a great honor.”

While Lippincott’s page-turner has remained on the New York Times Best Seller list for weeks, the film version of “Five Feet Apart” will be released in theaters by CBS Films on March 22.