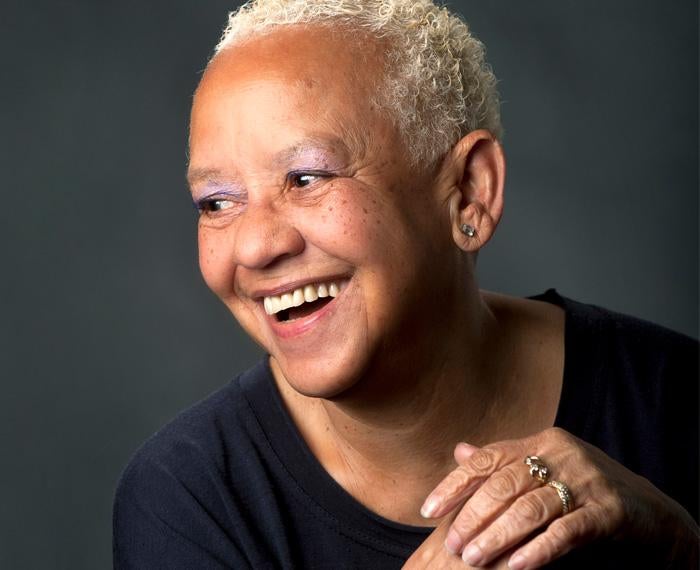 Nikki Giovanni, one of America’s most celebrated living poets, will speak at Alumni Hall on Jan. 17 during the University of Pittsburgh’s annual commemoration of Dr. Martin Luther King Jr. Social Justice Week.

The event is presented by Pitt’s Office for Equity, Diversity, and Inclusion, the Division of Student Affairs and the Year of Emotional Well-Being.

Doors at the Connolly Ballroom open at 6:30 p.m. and the event begins at 7 p.m. Admission is free. Request tickets in advance and bring your confirmation email with you to the door.

For more information, email OEDI at diversity [at] pitt.edu.

As a child growing up in Knoxville, Tennessee, and Cincinnati, Ohio, Giovanni always seemed to be suffering from colds and allergies that kept her home from school. That turned out to be a happy accident, she said, “because it meant I could read the books I wanted to read.”

“My dream was not to publish or to even be a writer,” she said. “My dream was to discover something no one else had thought of. I guess that’s why I’m a poet. We put things together in ways no one else does.”

Giovanni is now one of America’s most widely read poets and has published more than 30 books of verse and prose for adults and children.

She first came to prominence in the 1960s during the height of the American civil rights movement, advocating not just on behalf of racial but also gender equality. Through appearances on national television and her extensive lecture tours, she quickly became a leading figure among emerging Black artists.

Beginning in the early 1970s, Giovanni began reciting her poetry against a backdrop of music for a series of seven spoken-word albums, including “The Nikki Giovanni Poetry Collection,” which was nominated for a Grammy Award in 2004.

A recipient of the Langston Hughes Medal from the City College of New York and seven NAACP Image Awards, Giovanni also won the first-ever Rosa Parks Woman of Courage Award from the Southern Poverty Law Center and Troy University at Montgomery, Alabama, in 2002.

A retired distinguished professor of English at Virginia Tech, Giovanni has been called instrumental in helping the university community heal following a 2007 mass shooting on the Blacksburg, Virginia, campus that killed 32 people and injured 23 others. Giovanni has talked about her experience learning that institutions need to be prepared not just to handle a crisis, but also to provide resources and emotional support to staff and students impacted by tragedy.